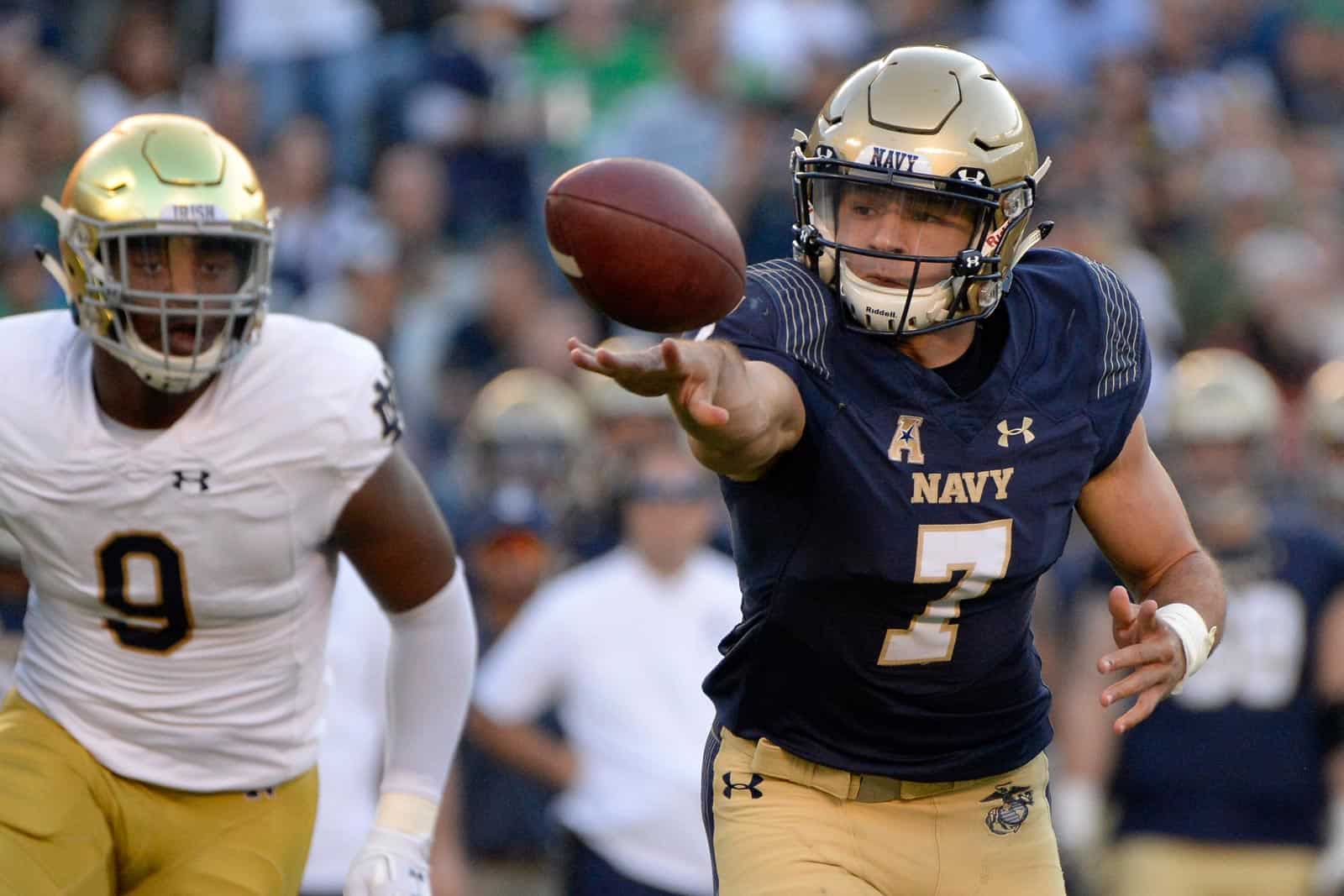 The 2020 Notre Dame Fighting Irish vs. Navy Midshipmen football game will not be played in Dublin, Ireland, as originally scheduled, both schools announced on Tuesday.

Notre Dame and Navy were scheduled to square off at Aviva Stadium in Dublin, Ireland in Week Zero on Saturday, Aug. 29. The game, moving due to the novel coronavirus 2019 (COVID-19) pandemic, will now be played for the first time ever at Navy-Marine Corps Memorial Stadium in Annapolis, Md.

The rescheduled meeting will take place on Labor Day weekend on Saturday, Sept. 5 or Sunday, Sept. 6 and it will be televised nationally by ESPN or ABC.

Navy has never hosted Notre Dame due to the seating capacity of Navy-Marine Corps Memorial Stadium, which seats only 34,000. For example, Navy “hosted” Notre Dame at SDCCU Stadium in San Diego, Calif., in 2018 and the attendance was listed as 63,626.

“We are obviously disappointed not to be traveling to Ireland this August,” said Naval Academy Director of Athletics Chet Gladchuk. “But, as expected, our priority must be ensuring the health and safety of all involved. I am expecting that we will still be able to play Notre Dame as our season opener, but there is still much to be determined by health officials and those that govern college football at large. Once we have a definitive plan in place, we will announce the specifics pertaining to the game. I am extremely grateful to all that were involved in the planning of our game in Aviva Stadium, especially John Anthony and Padraic O’Kane who created what would have been another extraordinary event in Dublin. I realize many are disappointed and were looking forward to the spectacle of this event and a visit to the Emerald Isle, but I do know there is a complete understanding of why it’s in our best interests to make every effort to relocate the game.”

Notre Dame and Navy first met on the gridiron in 1927 and have played a total of 93 contests. The Fighting Irish have won three consecutive games and currently lead the overall series 77-13-1 (two Notre Dame wins were later vacated under a discretionary NCAA penalty).

“Our student-athletes have had great experiences competing in Ireland and are very disappointed not to be returning to Dublin in 2020,” said Jack Swarbrick, Vice President and James E. Rohr Director of Athletics at Notre Dame. “The change of venue has been a very difficult decision for our colleagues at the Naval Academy, but we are in full support of their choice. We are also grateful for everything our partners in Ireland have done to make this a smooth transition. We look forward to going back to Ireland for a game in the not too distant future.”

The release today also states that Notre Dame and Navy “…will continue to work closely with the event organizers to plan for a return to Ireland in the coming years.”

“College football is one of the greatest spectacles in world sport and we had been thoroughly looking forward to welcoming Navy and Notre Dame here this summer for the first game of the Aer Lingus College Football Classic Series,” said Leo Varadkar the Prime Minister of Ireland. “Unfortunately, due to circumstances beyond our control, that is now not possible, but we hope to see both universities return to Aviva Stadium in the coming years. I want to personally thank both Chet Gladchuk and Jack Swarbrick for their efforts to bring the game to Ireland and we hope to welcome both teams back in the near future.”

I don’t know why this game has never been in Annapolis? With standing room only, they can probably get 38,000. Wake Forest stadium holds only 31,000, and they got less than 100 over that when Notre Dame played there in 2018. That is the arrogance of Notre Dame. Glad to see Annapolis FINALLY, host this game.

BMCG1958, it’s a home-and-home series and has been for eons. Notre Dame can’t tell Navy where to play its home games.

You may also be aware that Navy doesn’t play Army in Annapolis either. They rent out big NFL stadiums and capture the game’s full commercial value.

Lastly, who knows what this season will hold in terms of games and large venues, but Wake has moved its September 2020 home game against the Irish to BofA Stadium in Charlotte. Wake seems very jazzed about the move and is making a big deal of selling tickets and creating events around the weekend. Hopefully COVID won’t scupper all those plans.

Haters gotta hate, but no reason for the ND hatred on this topic.

Game is usually not in Annapolis because their stadium holds about 30k and they have been able to get larger crowds in places such as DC NYC Baltimore, Orlando, Jacksonville, San Diego, Dublin etc. Imagine if Kent or Akron played Ohio St. every year. Wouldn’t it make sense for them to play at the Browns Stadium and get twice as many fans than their own stadiums hold?

Philadelphia and Cleveland, too, for ND @ Navy, though not since the ‘70s for the latter.

Notre Dame drew many students from Ohio before WWII… For example, my grandfather was in the class of 1922, alongside many Ohio young men. Their clerk company in Notre Dame ROTC was all Ohioans from the Cleveland-Akron-Youngstown area. Notre Dame football was huge in the Western Reserve…

Thank you for the history, which is always good to learn.

Since playing Navy in Cleveland in ‘76 and ‘78, I believe ND’s only game in Ohio has been the ‘95 opener of a home-and-home with Ohio St. There is another Ohio St. series on the horizon: ‘22-23 with the first game again in Columbus. If the Shamrock Series continues, Cleveland and Cincinnati would both seem to be candidates to host a game.

The ND appearances could be even more sparse, however, as the Irish had never played a football game in neighboring Kentucky until last Labor Day’s game at Louisville.