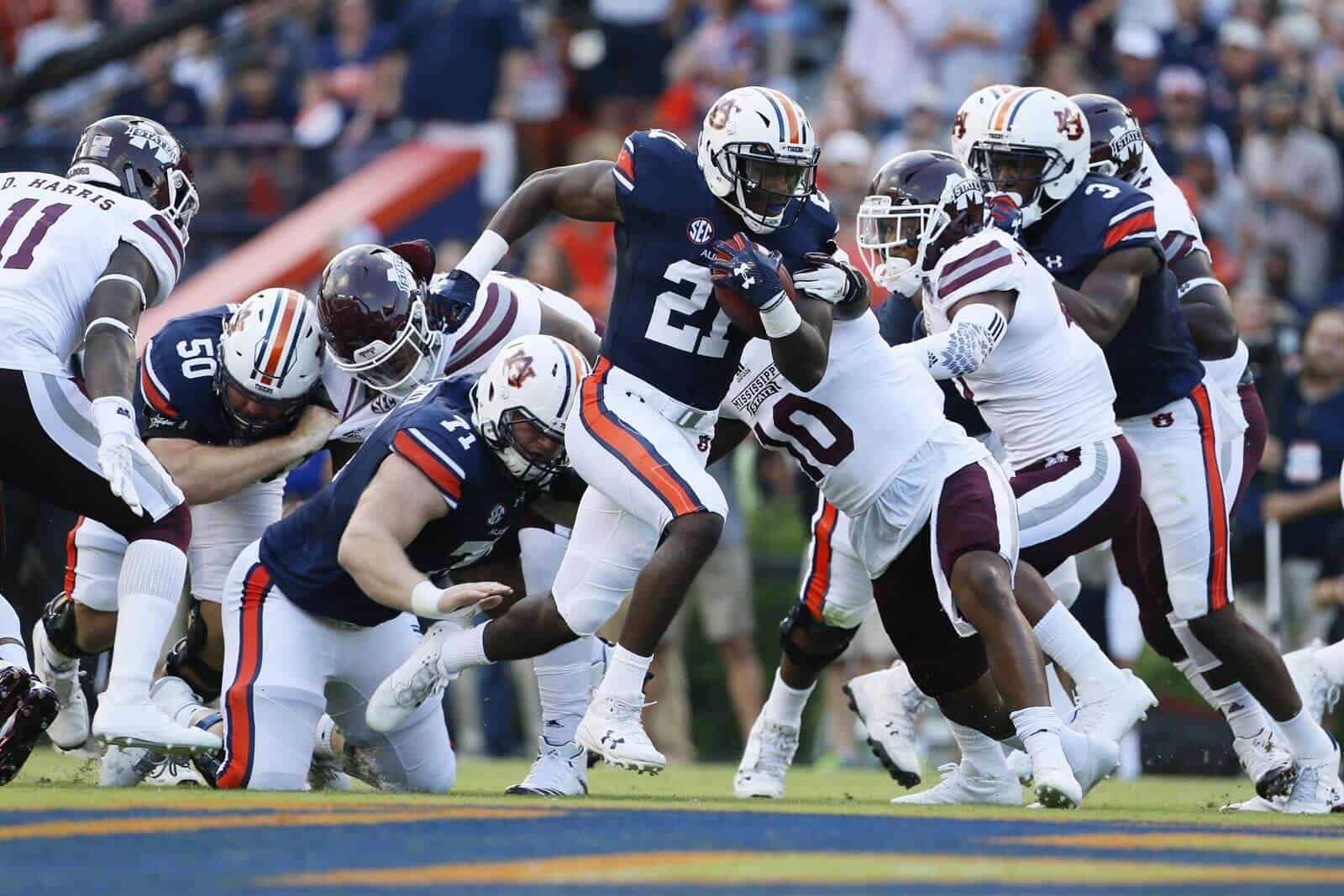 Welcome to Week 6 of 2017 SEC Football Predictions. Ole Miss gave up 66 points to Alabama. Butch Jones handed out donuts to fans inside and outside Neyland Stadium on Saturday against Georgia. The fans seemed much more excited for the free donuts given to them during SEC Nation on SEC Network than they did the one huge donut that never moved on the scoreboard the entire afternoon.

We originally thought the straw to break the camel’s back carrying Kevin Sumlin’s coaching career would be a loss in last week’s game at home against South Carolina. After another Aggies win, all straws were piled on Butch Jones’ camel and guess who comes to town October 14 after two weeks of “who’s our next coach going to be” talk? Yes. You are correct. The Gamecocks. This will probably be Butch’s final game as head coach of the Vols after a home loss.

SEC Football Predictions for Week 6 is not Fake News whether Butch Jones wants to believe it or not. This is our first SEC vs. SEC Saturday of the 2017 season. Every game counts this week.

Quick word of wisdom: Here we are again heading into October with Auburn gaining momentum after an extremely slow start to the season. Much of that slow start could easily be attributed to taking on defending national champion Clemson on the road with a new quarterback who was still getting his sea legs under him. Baylor transfer Jarrett Stidham appears to have a better grip on the offense or the offensive staff appears to have better grip or a little bit of both. Whatever the cause, it’s beginning to take hold.

Another theory for Auburn’s success is Missouri and Mississippi State. The Mississippi State win would have looked better had LSU not become the third best college football program in Louisiana. An Auburn win against Ole Miss and we are right back at wondering whether the Tigers are getting better or the competition is getting worse. Honestly, it’s not Auburn’s problem. Their job is to win the next game on the schedule and that’s all they’ve done each and every week that didn’t include Clemson as the opponent.
PREDICTION: Auburn 48, Ole Miss 10

Quick word of wisdom: The second team to rise to the top above the crop of somewhat disappointing conference is Georgia. This rank is temporary, but the Bulldogs appear determined to hold steady and possibly make a move toward Alabama’s three-year seat as king of the conference.

Vanderbilt is better than previous Commodore teams under Derek Mason, but they rank somewhere far below Alabama, but not that far from Florida. The Gators defeated Vanderbilt last week, but the Commodores were within one score much of the fourth quarter. Whether or not Vanderbilt can catch Georgia off-guard in an early 11:00 a.m. local kickoff in Nashville is a question that Kirby Smart and the Bulldogs hope to answer quickly.

Jake Fromm was not overwhelmed in South Bend or Knoxville, so it’s safe to say he will not contract a sudden case of nervousness inside a Vanderbilt Stadium that will more than likely be littered with Georgia fans. Nick Chubb and Sony Michel always help keep life steady for a quarterback. Fromm has yet to be called on to put the team on his shoulders and carry them to victory. He has a total of 40 attempts in the previous three games against Samford, Mississippi State, and Tennessee, respectively. He threw 29 times in South Bend and led the team downfield on the final drive for the winning field goal, so to say he can’t do it would be foolish.

Big game word of wisdom: No one outside of Gainesville (and probably inside) is excited to parade this Gators team around the country as the team to unseat Alabama in the SEC. On the other hand, no one anywhere believes LSU could be considered anything other than a colossal ball of doo doo. Florida may not be great at winning pretty, but they are great predicting easy homecoming wins. The college football world was collectively shouting “Oh no they didn’t!” when LSU was announced as Florida’s homecoming opponent. The rivalry took on new life when both schools treated rescheduling last year’s postponed game after Hurricane Matthew as if they were organizing and hosting the Olympic games.

LSU is not good and the season may mirror the 1998 Tigers team more and more each week. This team has talent, but that talent is not putting together anything close to winning football and the first Saturday in October is six weeks too late to turn the sinking ship around. Florida won’t win pretty, but that’s kind of their thing right now.
PREDICTION: Florida 24, LSU 14

Quick word of wisdom: Arkansas is coming off a win over New Mexico State and South Carolina is coming off a road loss to Texas A&M in a game the Gamecocks led 17-7 in the third quarter. Both of these teams are hard to read, but I think South Carolina will find a way to win at home Saturday. Don’t be surprised if Arkansas pulls out a victory, but I’m taking the home field for the win this week.
PREDICTION: South Carolina 20, Arkansas 19

Quick word of wisdom: A few weeks ago we were talking about how Kevin Sumlin’s last game at Texas A&M would probably be a September 30 loss to South Carolina. Heading into Week 6, the Aggies are in familiar October territory as they welcome No. 1 Alabama to College Station. Following the ugly UCLA loss and two ugly wins against directional schools, the Aggies are 4-1 overall and 2-0 in the SEC. The problem with this familiar territory is the entire season going up in shambles each of the last three years following a demoralizing loss to Alabama.

The 2017 edition could set up nicely for A&M to surprise Alabama, but it’s doubtful. Quarterback play is not at a level to beat an Alabama team who is so dominant that experts are questioning the strength of the competition. When the college football world believes you aren’t as good as you appear because your margins of victory are so lopsided, then you are doing football right.

True freshman quarterback Kellen Mond led the Aggies in rushing in Saturday’s comeback win over South Carolina. Mond was directly involved in 43 plays after throwing 27 times for 159 yards and running the ball 16 times for a net of 95 yards. The Aggies will need Mond to at least pose a threat as a runner on Saturday night if they want to have any shot at upsetting a ‘Tide team that has lost to three teams in the regular season since 2012. The first of those three losses came at the hands of Johnny Manziel and the Aggies.

Jalen Hurts seems to be reading the defense and making calls at the line of scrimmage for Alabama’s offense. He seemed to be a little slower in the first three weeks, but he’s now making great decisions with the ball. Add that to an offense and defense that is playing as physical as ever and you have a formula for domination. Bama may not score 66, but they should be able to demoralize Kellen Mond early enough to preserve a healthy blowout.
PREDICTION: Alabama 41, Texas A&M 14

Butch Jones should’ve just handed in his resignation as well. Been there 5 years & not much to show for it, good recruits too! I actually feel sorry for Vol fans & that is something I will never say again.
Even being an SEC homer, I was happy to see The Men of Troy beat LSU. Ed Orgeron was a mistake from the get-go! He was a good coordinator at USC but sucked being Ole Miss head coach. I thought it was a mistake when the fans & players wanted to make him head coach, I am not saying this just because they lost to Troy. I just don’t think he can hang as an SEC head coach, Florida wins easily.
I will take Arkansas over S.Carolina.
As for Kevin Sumlin, after A&M loses this game, this should not be held against him. No one can hang with Bama right now. Not sure what was worst, A&M having a big lead on UCLA & losing it or having the lead in the 1st place for the Bruins to comeback & win. A&M has a good team & will win many more games this year, Sumlin is a good coach but I will take Bama 33-14.

Good picks this week. However, I’m going with Florida 31-14. It’ll be a 7 pt. difference until the second half where that Gator running game (which has been unstoppable the past three weeks) will wear down the LSU defense. Franks may struggle some, but he’s definitely getting better.