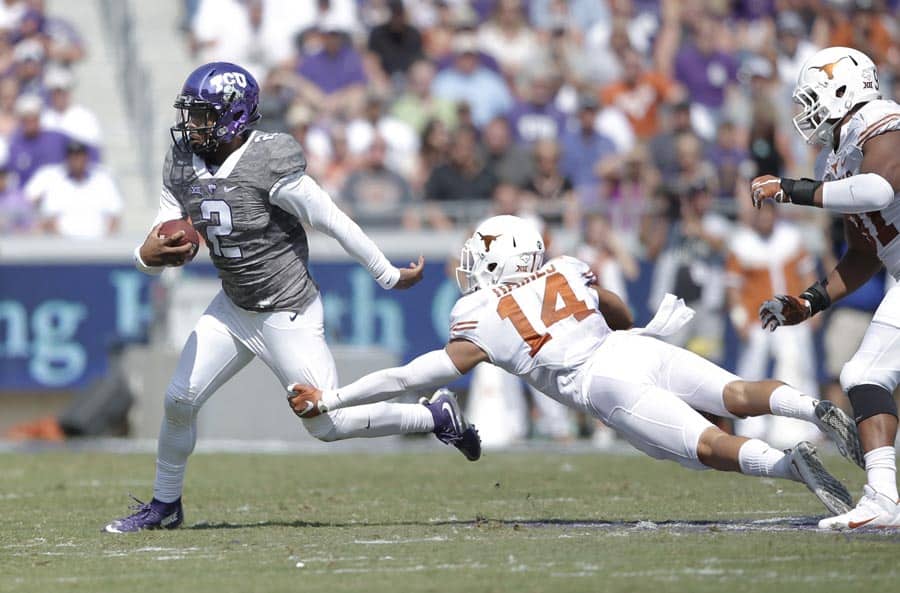 The Big 12 has announced two date changes on the 2016 football schedule – Kansas-Texas Tech and TCU-Texas. Both games were changed at the request of Big 12 television partners.

Kansas at Texas Tech was originally scheduled for Saturday, Oct. 1, 2016. The game has been moved up two days and will now be played on Thursday, Sept. 29.

TCU at Texas was originally slated for a Thanksgiving Day kickoff on Thursday, Nov. 24. The game has been pushed back one day and will now be played on “Black Friday,” which is Friday, Nov. 25.

The Big 12 Conference also stated today that television selections for the first three weeks of the 2016 season are due to the conference office by June 1.

Who is the Rocket Scientist that decided to rent out Jerry World to play the worst team in teh Big 12?

I get that you’re going to play KU, its on the schedule can’t really trade them in for, say,…a team with a winning record. But somebody please tell me Tech isn’t giving up ticket sales and paying rent for Jerry World to play a world class L O S E R.

Somebody please tell me Tech isn’t intentionally losing money on this game….

TT plays at the Jones AT&T Stadium in Lubbock Texas. That is where the KU-TT game will be played. I anticipate an audience of 10s

Did the UT games garner that terrible of ratings that they’re getting bumped from the (somewhat recent) traditional Thanksgiving evening slot?

Lots of factors going into this, to be sure. For one, yeah, Texas hasn’t been at their best so it wasn’t the ideal time to try to “amend” a tradition. Plus, I’m not sure the flipping back-and-forth between Tech and TCU and having it ON Thanksgiving is working that well anyway. Now that (former UT athletic director) Patterson is gone, I could see the administration seeing the reality of the situation: it worked well when you hosted a game every other year against a rival, but hosting the game EVERY year? As a Texas alum and fan, I’ve had to go from a situation where I could alternate between hosting Thanksgiving in Austin and attending the game and then following up with traveling to see other family and watching on TV… to a situation where I either miss half the games or piss off my family from ducking a family holiday to go to the game every year. I’d imagine that lots of the students, alumni, fans, and even the university and stadium staff are facing the same thing. So, personally, I don’t know if UT was going to argue with this too much. It would be far more ideal if the game was in Austin on thanksgiving semi-annually, but TCU and Tech are both even less prepared to host the game on turkey day.

Maybe it will be an every-other-year thing now…? But as you pointed out, even when we were playing A&M the game had often been played on black Friday…

I went to the 2009 game at A&M when I went to SHSU, I had a great time – but I am also a native Metro Detroiter, and the Lions game is of course a yearly tradition. I think something like that needs more time for people to become accustomed to, or a better time slot. With the Lions always playing the early game it worked out well if we attended the game and then did a family function, I can see how the evening UT slot made that more difficult.

Tech would get a 5pm kickoff on Sept 29 against Kansas. This seems really positive since they had no night games at home in 2015. All good right?