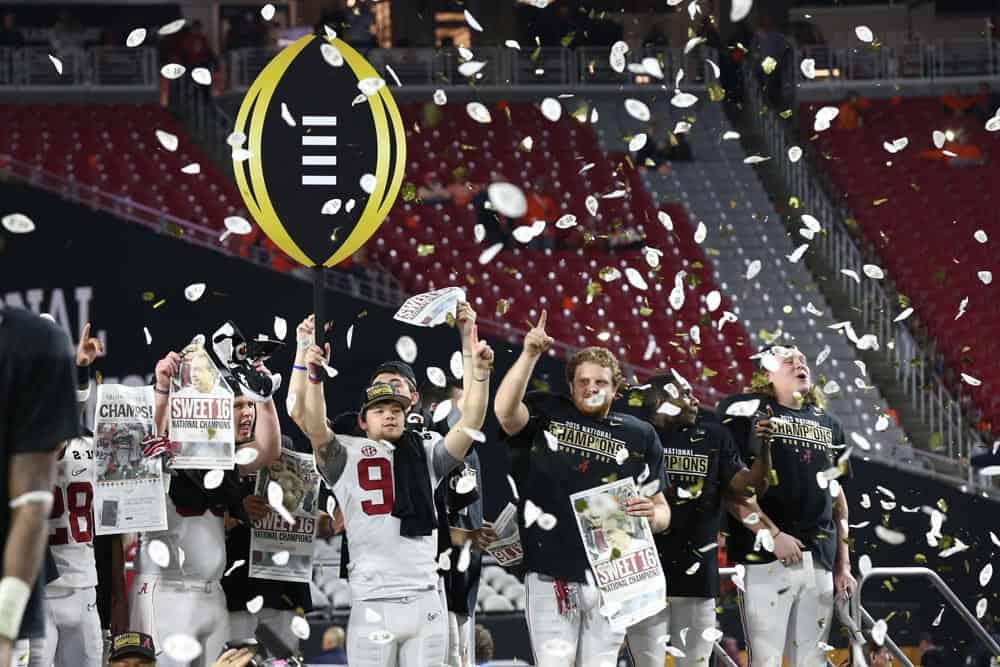 The 2016-17 bowl schedule is set to be announced today, including the College Football Playoff and New Year’s Six games.

Stay tuned — we’ll have more updates as they become available!

11:25am
The Bowling Green (Ky.) Daily News reports that the Boca Raton Bowl will likely match Western Kentucky and Memphis.  The report is a mixture of comments from WKU AD Todd Stewart and the requisite “source close to the program”.

11:59am
Add these to the list:
Las Vegas Bowl – Houston vs. San Diego State
Poinsettia Bowl – BYU vs. Wyoming

3:50pm
That’ll bring us to a close.  Thanks to everyone for following along, and for the updates.  Enjoy the bowl games!

McMurphy tweeted Houston vs SDSU in Vegas and BYU vs Wyoming

Hey, spirit of Beano Cook; Idaho is going bowling, Notre Dame is not…..

Idaho going bowling the year before the step down to FCS…

Yes Idaho goes down to the FCS, but that means that they can an official NCAA Football championship without a trickery CFP-Comittee, sponsored by ESPN, which help Ohio State info a CFP-Championship Game.

Oklahoma to the Sugar Bowl? Due to being the Conference Champ

the winner of the big 12 goes to the sugar bowl

Oddsmakers have the semifinal game times posted. Peach Bowl at 3:00 EST and Fiesta Bowl at 7:00 EST.

GO BLUE!!!!!!!
Btw we will beat y’all!! Ohio states should not have won they JT Barrett didn’t cross the line PERIOD

ESPN have the Army playing in the Armed Forces Bowl at 4:30 pm

I think that Itah playing Indiana and then Minnesota playing Washington State is kinda screwing the B1G.

Why, because both B1G teams will get crushed?

Why is Ohio state in?

Every time i get a blues feeling, i look at the 2016 CFP decision, and then i get happy. Ohio State in a good joke!