2015 SEC Football Schedule to be Released Tonight at 7pm ET 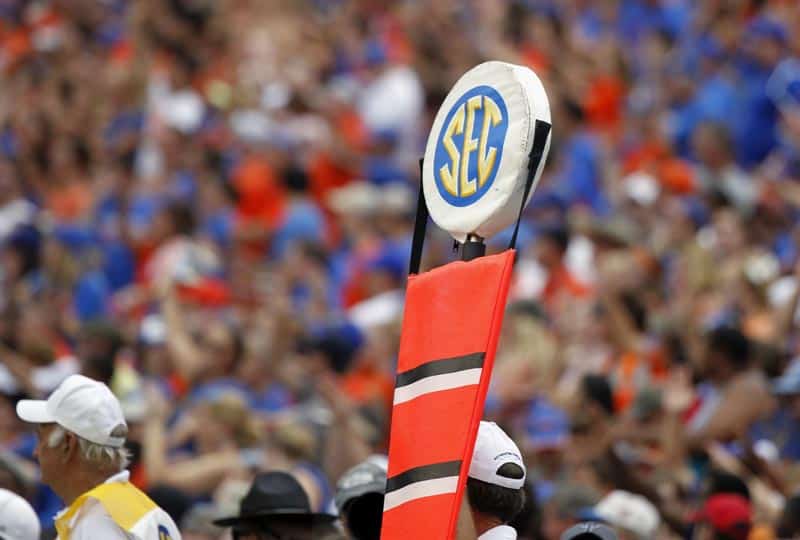 The 2015 SEC Football Schedule will be released tonight at 7pm ET on the SEC Network, the SEC announced this morning on Twitter.

Each SEC team already knows which conference opponents they will play every season through 2025 based on the future schedule rotation that was released in May.

Below are the 2015 conference opponents for each SEC team. For non-conference games, click the schedule link for the most current information. Some dates and/or opponents could change today or this evening.

Only one opponent changes and the other 7 stay the exact same.

Hopefully they revisit the 9 game schedule idea down the road…

Not having 9 games is stupid ,repeat stupid with 14 teams. On a 6-1-1 format with 14 teams you play 6 teams twice in 12 years while you play Wofford or some other cream puff more times in that period. Btw, guess what conference plays the least OOC P5’s ? The SEC b far with only 20% of games OOC vs P5’s. No other P5 conference plays less than 30% of OOC vs P5’s. Btw, guess what conf has the most team every year that don’t play any P5’s? The SEC. Miss St, Ole MIss, A&M are 3 of the SEC ranked teams that play no P5’s. So they essentially eliminate 1/3rd of the their season of having any chance of a lost and thus get an inflated rating playing limited schedule.

Btw, you do know that playing 8 games while 3 of the 4 P5 Conferences play 9 is statistically unfair for the ACC and SEC. Of course you do b/c you mentioned it indirectly in your post. P5’s should eliminate FCS games, all play 9 game conf schedules and have to play a P5 OOC. If you don’t play a P5 OOC you should be eliminated from the playoff.

Rumor has it that the SEC is looking at having only 4 conference games and 8 non-conference games in the future to assure all their members a more than good opportunity to go to a bowl game and to have 10 home games to generate the money they require. They feel the joke of the schedule they present now to all their fans is believed to be appropriate so why not take a couple steps further. Homes Games, Bowl Games, Making Money, that’s all the SEC cares about, Period!!!!

The people that really hate the SEC have a great way of stretching things out. I would think that any conference out there cares about homes games, bowl games & making money. If not then there would be no conferences or football teams at that matter.

Obviously a nerve was touched. Until the SEC starts scheduling up and scheduling road games, the national view of the SEC is less than it could be.

It’s no longer a “game” when the competition is too often inferior. It’s not a fair game when an unbalanced number of the games are at home.

If the SunBelt did not have the SEC’s nipple to hang on to, the SunBelt would be a FCS conference.

The regional bowls in SEC territory don’t care, But the playoff committee will keep in mind how the SEC purposely schedules to avoid/minimize outside competition (besides the inter-conference rivalry games).

The non-conference schedules for the two Mississippi programs are a joke.

No nerve was touched. The whole commit was ” Homes Games, Bowl Games, Making Money, that’s all the SEC cares about, Period!!!!” So your telling me that the other conferences don’t care about home games/bowl games or making money? That’s my point, they all do & always will, that’s what it is all about to them. It just seems like all is blaming the SEC for everything & not looking at other conferences. You do understand that SUN Belt also play teams from THE BIG 12, THE BIG TEN, THE ACC & hangs on their nipples as well. Sometimes the Sunbelt wins a few. The committee understands SEC strength of schedule within, as for “It’s no longer a “game” when the competition is too often inferior”. That was not true when Ga.Southern beat Florida, Jville St beat Ole Miss, La Monroe beat Bama/Arkansas & the other many close victories the SEC teams got over these “as all like to call them cupcakes”. Please take a look at NC State, Oklahoma St & Penn St future OCC schedules, they are also jokes.

First, other conferences are more concerned about fans and getting good games OOC and playing teams in conf regularly to maintain and build rivalries. P12 and B10 both cited that on why they are doing 9 game conf schedule. B10 specifically cited it as they know with 14 teams the cross division games of their top teams would be rare in a 6-1-1 format. B10 maximized the cross division games by doing a 6-3 format with parity. Parity mean the top teams play more, so for instance there will be 4 games between OSU and Nebraska in a 6 year span, top teams in the east such as MSU. OSU will play Neb and WI more frequently than they play cross games with Indiana for example The 6-1–1 format with 14 teams is stupid to put it bluntly. You play 6 teams in your conf(other division) twice in 12 years. It’s simple, you will see less Bama vs Georgia or LSU vs Scarolina cross overs than you will see the playing Wofford in 12 years. The fan base are getting screwed but they aren’t smart enough to see it. Take into account less big cross divsion games and the fact 1/2 of the SEC avoid home and home vs P5’s OOC and you get alot of [email protected] games for home fans.

Second. Penn State scheduled light OOC for the years under sanction which was suppose to be thru 2017. Even then the played UCF in 2013/2014( 2013 finished top 10 and won a BCS game). Penn State’s water down thru 2017 sanction years is better or equal to 4 teams in the SEC. After sanctionsthey have series with WV. Vtech, Pitt, and neutral site game with LSU. That’s better than 3/4’s of the supposed mighty SEC who are mostly cowards in general in not playing home and home series with P5’s

@Schoup: So because I have a different opinion then yours I’m clueless, I will have to remember that. Not sure how it is that when other conferences schedule easy opponents it is okay but when the SEC does it, it is coward? You failed to mention the rivalries with the SEC & ACC, Clemson/S.Carolina, FSU/Florida & Georgia/Gatech. I can understand where you come from at some points but not really sure why it bothers you this much with the SEC. People is general can always find something to complain about & I bet when the SEC does go to 9-conference games in the future somebody out there will complain about that as well. Most of the SEC does play at least one P5 opponent a year,(sometimes two) sometimes it is on a neutral field but they do. Penn St scheduling a bad OOC due to sanctions in my opinion is not an excuse unless the other P5 wanted out of contracts due to the sanctions. Not taken anything away from Penn St, great program. Please keep in mind that the home/n/homes series are not all there cracked up to be. I have nothing against them & like to see them myself from time to time but in the future all the conferences (including cowards like the SEC) as you say will figure it out.

This sums it up. I know as a Special Education Fan this is lost on you. The SEC plays the least P5’s OOC,,it’s not even close. Look it up. It’ not that other conferences don’t play soft OOC. but SEC blowhards like you are clueless. Yes clueless that they play the most. The SEC plays 2O% of OOC vs P5’s. No other conf plays less than 30%. The SEC had 4 teams that don’t play a P5 this year and that’s the most of any conference. The B10 had 13 of 14 play P5’s OOC and the only one was Penn State(who changed when sanctions came down or it would have been 14 of 14) The SEC cowards are having to force their teams to play P5’s by rule b/c annually they have 4 or more who. Again the most of any conference. Btw, yes home/home means something, it means you’re not a coward to play a real away game. Of course we know why the mighty such as Bama don’t…they are 1-4 in their last real away games vs P5’s OOC. I can give you other so called SEC powers who are also poor in real away games. The neutral site game is farce b/c they are virtual home games b/c the other team is traveling 1500 or 2000 miles and Bama and other SEC teams travel a few hundred miles from them to Atlanta or other southern places. They are utter cowards and yes their fans are really stupid to not pressure them to have them play a quality home game OOC instead of all cream puff pay games. Btw, while other conferences are reducing or getting rid FCS games(B10) the SEC cowards are doubling down on more while also being cowards not playing 9 games with 14 teams. It is utterly stupid to play 8 games with 14 teams. There is no logical argument to except trying to game the system and cowardice.

@Schoup: Special Education Fan & clueless. Great, now I see why people run from your post. Talking down to someone will never get your point across & I’m really sure with all you’re percentages/knowledge/facts on everything that this really upsets you, not sure why? Systems come & go all the time, I agree with you (being special ed & all) that the SEC plays a lot of ConUSA, Sunbelt. Just like the The BIG TEN plays a lot of MAC, PAC-12 plays MWC, ACC plays ConUSA/Sunbelt & (FCS), BIG 12 plays ConUSA & Sunbelt….You get my point? All P5 play the same (as you say “cupcakes & creampuffs”). In a couple of years when the SEC will go to 9 game conference & play one P5 & hopefully then all will be okay in the world. I don’t really think anyone is scared of playing home/n/home due to the past records. As of “right now” Neutral site games work, that is why you see & are going to see much more of them. That is a fact & maybe one day the neutral site games will fade away, you never know.

Some programs have a weak schedule due cancelled games, transition to new conference, or having difficulty scheduling home-and-homes with P5 opponents, etc.

But other programs consistently schedule weak by choice, including programs which avoid road games. That is the crux of the criticism.

Non-conference schedules which include TWO SunBelt/CUSA opponents AND a FCS opponent and only one road game is a WEAK schedule.

Overall the SEC has the weakest non-conference schedules of P5 conferences. And that is mostly by choice (Mizzo deserves some temporary slack due to the conference move).

Some of that will be rectified when the SEC requirement to play a minimum of one P5 opponent kicks in. But until the SEC begins scheduling more home-and-homes and decides to move to a 9-game conference schedule the criticism will continue to be well deserved.

Penn State OOC schedule was light b/c they thought they had sanctions. They cancelled several series when they went under sanctions. Post sanctions which they thought were thru 2017 they have series with Vtech, WV, Pitt, neutral site with LSU. Sanctions ended early.