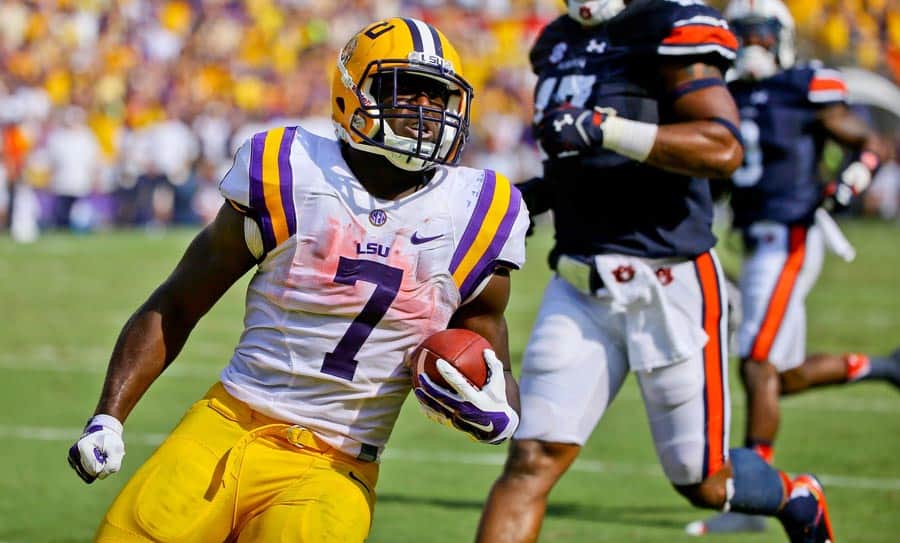 Welcome back to SEC Football Predictions. The Alabama-Ole Miss game is still in progress and Leonard Fournette is still running over and through Auburn defenders.

It was Black Saturday/Sunday Morning in the state of Alabama in Week 3 with both teams not exactly toting Heisman-worthy quarterbacks. Alabama looks like the teams everyone expected to see in 2009 when Greg McElroy was in his first season under center and 2011 when AJ McCarron became the starter.

Instead, Alabama won national titles both of those seasons. It’s still early in the 2015 season, but the Tide needs to lean much heavier on its running game if it expects to be anywhere near the Georgia Dome in December. Auburn just hopes to stop the bleeding at some point before the season becomes an absolute disaster.

Kentucky may never beat Florida again. Ever. This was their best opportunity to do it and the Wildcats defense even held the Gators to 14 points. The offense ran into a typical Florida defense and could only muster nine points.

The SEC is a jumbled mess and anyone’s guess is as good as another as to who will come out on top. Ole Miss is good, but is LSU better? Tennessee is good, but can they finally beat Florida? Let’s go to the prediction center and find out.

Quick word of wisdom: This would be a great time to fear a letdown coming on if you are a Georgia fan, except Southern is coming to town. Kudos to the athletic director and his staff for scheduling Southern as its sandwich game between South Carolina and Alabama. Alabama heads to Athens next week for a 3:30 p.m. CBS televised game, so expect the Dawgs to strike early and get out of the heat ASAP.
PREDICTION: Georgia 63, Southern 0

Quick word of wisdom: This Gamecocks team is in a spiral that only Auburn has a chance of matching at this point of the season. It’s weird writing this, but South Carolina seems to be catching the Knights of Central Florida at a good time. UCF is without a win in three tries (including a 16-15 loss to Furman), but when you are a midst the aforementioned spiral as the Gamecocks are, no game is a sure thing.
PREDICTION: UCF 28, South Carolina 21

Quick word of wisdom: LSU, Georgia and Ole Miss appear to be the class of the SEC — for this week. The SEC is the class of college football — until Toledo beats Arkansas and Auburn needs overtime to defeat Jacksonville State. Don’t fall asleep on Syracuse. Les Miles’ biggest enemy is success. LSU has proven they can’t handle it all too well in recent years. Syracuse is allowing just 1.7 yards rushing per carry, but they have yet to face Leonard Fournette. Syracuse causes a few eyebrows to raise as the score comes across the ESPN crawl during the early session of games Saturday, but the Tigers should have enough run power to get the win in the dome.
PREDICTION: LSU 35, Syracuse 20

Big game word of wisdom: The premier game in the SEC this week takes place at Florida Field in Gainesville — a place that first-year head coach Jim McElwain is trying to rebuild to be known as The Swamp again.

Tennessee is trying to end a losing streak to the Gators that stretches all the way back to 2005. Florida has won 10 straight years and Tennessee needs a win to destroy ten years of terrible history against the Gators and to create endless hope for the future of the program — especially in the short-term future of 2015. Losing to Oklahoma in double overtime after dominating three and a half quarters two weeks ago put a wet blanket over a passionate fire in Knoxville, but a win in Gainesville on Saturday will ignite a forest fire of passion in Big Orange Country. Get the matches and gasoline if you are in the Volunteer State.
PREDICTION: Tennessee 24, Florida 13

Quick word of wisdom: ULM hopes to be partying like it’s 2007 at the end of this one. Alabama hopes to find a consistent offense to go along with a great defense.
PREDICTION: Alabama 59, Louisiana-Monroe 0

Quick word of wisdom: The Aggies are only favored by 7.5 points in this neutral site game that has become a fun annual tradition now that this rivalry counts again since A&M joined the SEC West in 2012.

Arkansas lost to Texas Tech last week, 35-24 (SEC Football Predictions had TTU winning 34-24), and it doesn’t look promising for the Hogs as A&M’s defense has more sacks than a grocery store. John Chavis made a smart move to College Station because he’s basically tasked to hold the opposition to under 30 points each week. His defensive unit will do that this week and that 7.5 point spread becomes laughable.
PREDICTION: Texas A&M 44, Arkansas 24

Quick word of wisdom: Remember when Vanderbilt beat Ole Miss three consecutive years in 2010, 2011 and 2012? Then there was the epic season-opening game on a Thursday night at Vanderbilt where the Rebels scored in the closing minute to win, 39-35.

Vandy has actually won 6 of the last 10 in this series. Ole Miss dominated last year at LP Field, 41-3, and even with a hangover from last Saturday night’s/Sunday morning’s Trounce In Tuscaloosa, this one will look eerily similar to last year’s meeting.
PREDICTION: Ole Miss 35, Vanderbilt 6

Quick word of wisdom: I’m not a gambling man, but is it considered gambling when Vegas hands you free money? Auburn is a 2-point favorite and, other than home field advantage, the biggest reason is the expectation that fortunes will change with Jeremy Johnson being benched in favor of redshirt freshman quarterback Sean White. If White can bring any consistency and reliability whatsoever to the quarterback position Saturday night, Auburn very well could get the win. Expect an entertaining game between two teams desperate to avoid beginning the season 0-2 in conference play.
PREDICTION: Auburn 31, Mississippi State 28

Quick word of wisdom: Again, I apologize for becoming Danny Bettaducci here, but Kentucky is favored in this game. I’m sure Mizzou head coach Gary Pinkel won’t happen to mention that to the players at some point so he can play the “no respect” card.

Actually, is there anyone in the history of college football — or at least the SEC — that has a more legitimate reason to utilize the “no respect” card than Missouri? Missouri has been in the SEC since 2012. They have more experience as the defending SEC East champion than they do coming into the season as a team that didn’t finish first the previous season.

So how does the college football world show our respect for a team than has two more division titles in three years than Vanderbilt and Ole Miss have combined in 23 years? We write off the Tigers and say this is the week it all comes to end. Then we all order large plates of crow at local Atlanta restaurant and eat it in front of all the Missouri faithful there to watch Missouri in the SEC Championship yet again.
PREDICTION: Missouri 23, Kentucky 9

no love for #BBN

The solid best teams in the SEC are LSU, GEORGIA & OLE MISS right now. I will only disagree on one this week & that is the UCF game. Gamecocks do not look good this year but I do see them beating Knights. I also think the MIzz vs Kentucky is up in the air as well.

LSU won’t have a chance come time when they play Ole Miss,Bama,Geogria because that whole offense relies on that stud rb(I don’t know how to spell his last name)so all they will have to do is load the box and stop him

Really the refs help Auburn? You are smoking something.
The game can be won by AU due to being at home and playing a new QB. If the game was in Starkville I would say they have a very slim chance but at home it is possible. One game between 2 teams is never an indication of the outcome between 2 other teams. Last year Auburn beat Ole Miss, Ole Miss beat Alabama then Alabama beat Auburn. Anything can happen.

Well poot fire and save matches, I’d be as happy as Jim Hayes opening up a brand new carton of Doral 100’s unfiltered if the Vols could pull it off. Unfortunately I expect the back up DB that is replacing Tabor to finish the game with 4 picks and 2 fumble recoveries returning at least 3 of the turnovers for a TD. I also expect nothing less than the Vol defense to end Grier’s day early forcing the third string QB into action at which time he will vault to the top of the heisman race after completing 32 of 33 for 367 yards and rush for 215 in the 2nd half alone. Other things to look for include a freak weather front moving into the Gainesville area minutes before kickoff as well as an Arian Foster and Jon Crompton guest appearances in the game to fumble multiple times on the one yard. Why do I expect these things you might ask, well simple because it is FL vs UT and some weird doodoo is bound to happen. Signing off with a little Holy, Holy, Holy!

Edwin,
Your vulgar posts need to be edited for radio. Poot and doodoo are inappropriate words that we will not tolerate in the comments section. However, Jim Purple Hayes loved him some Doral sticks. He could really drag those babies clean, man. He could really drags those babies clean. And the Tennessee-Florida game… I nearly predicted that exact scenario, but thought I needed to step away from the obvious script and throw crazy talk amongst it… Like such as… Tennessee giving Florida the business… and like such as. Always good to hear from you, Eddie Van Hollis. Your vocals are sweet as a Swisher and royal as an inn. Please keep me updated on the date of our annual Top Gun beach volleyball scene reenactment with Dr. Oakley and Jim Fields. You’re gonna love the new jeans I bought for it. They are cooler than the other side of Pitbull’s dress shirt collars.

Maybe Vols, Vols, Vols. Ha. Ha! Never count your chickens before they hatch! The Vols is a pretty good team. But don’t knock them down before Bama even gets up!!!! We might fool you! It needs to be done because big heads need to be put down!!