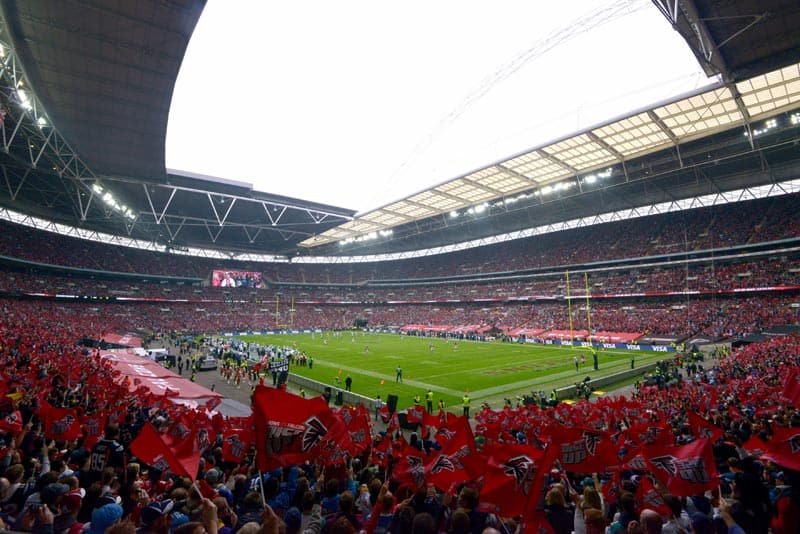 The NFL has announced the 2015 International Series games that will be played at Wembley Stadium in London.

Kickoff times and television coverage for the 2015 International Series will be announced at a later date.

Buffalo, Kansas City, and the New York Jets will each be making their first appearance in London. Jacksonville will be playing their third game in London. The Jaguars, who face Dallas in London this Sunday, also return to Wembley in 2016.

Detroit will be playing their second game in London after defeating Atlanta 22-21 earlier this season. Miami will be making their third appearance following games in 2007 and 2014.

“We are very appreciative of the outstanding support from our fans in the UK, not only for the games at Wembley, but for all of the related NFL events we have hosted throughout the city,” said NFL Executive Vice President of International Mark Waller. “We believe we have a great 2015 schedule that will continue to attract new fans to our sport and strengthen the bonds with our existing fans. To provide UK fans the opportunity to see games on consecutive weekends, to see new teams, and to attend a division game, which feature some of the most passionate rivalries in our sport, are signs of the growth and depth of our UK fan base.”

Due to an increase in popularity of the International Series, the NFL added a third game last season.

Earlier this season in London in front of over 83,000 fans, Miami beat Oakland 38-14 and Detroit rallied to defeat Atlanta 22-21. Jacksonville hosts Dallas this Sunday at 1pm ET on FOX.

this America’s game let London and the rest of Europe suffer through the one – nil thrillers from the lads on the pitch they are unworthy of our game.

You should have the international series in santa Clara

I cannot envision any benefit to the NFL playing in London. It is unfair to the teams and the American fans. London has their soccer, and we have our football. They are unrelated and does not benefit either country’s sport to play in each other’s country.

No more international games and no more thursday night games….

At James : That has to be the most idiotic response I’ve ever seen. How old are you? My guess would be 9 or 10. The Nfl international series needs to stop after 2016. Why should teams have to forfeit a home game? I’m sure Chiefs fans are real happy about that.

plenty of other venues to try….why three at Wembley? Amsterdam Arena and two Dublin stadiums are options–Madrid, Barcelona, Rome, etc.

Loads of Americans live and work in London….plus we speak the same language …( almost) :) plus its not much further to fly than say Patriots V Oakland.

Mark my words…this is a lead-in to a Pro Football Team being created in Europe, most likely the UK.

Not a doubt in my mind the NFL wants the stature of the World Cup.