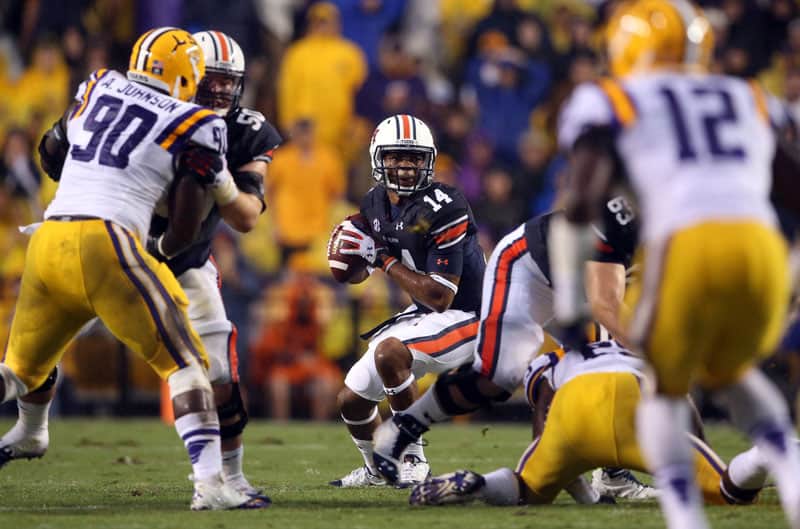 Looking at the national schedule, it’s easy to point in anticipation of November 8th where Alabama travels to LSU, Texas A&M makes the trip to Auburn, and Michigan State and Ohio State  play in a rematch of last year’s Big Ten Championship Game.

Even with Braxton Miller out, the Buckeyes should have a quarterback that will basically have a season under his belt by this point and it will still be a game that could determine who plays in Indianapolis on the first Saturday in December. However, this is an SEC-exclusive schedule breakdown, so what weekend of this season will be the best?

October 4
The prospect of the season’s best weekend usually appears after the first three or four games, but it’s August and it’s fun to look at the schedule and daydream about which weekend will have us exhausted from mind-boggling, big-game drama. A significant factor tilting the scales in favor of October 4th is that this is the only weekend of the season where all six games are SEC vs. SEC.

Applying the additional assumptions below about what makes a conference weekend intriguing, we determined October 4th is the best weekend of the 2014 SEC football schedule.

A “Circle This Game On The Calendar” Matchup
LSU at Auburn
This is Auburn’s only “revenge” game of the 2014 season. Few remember that LSU actually beat Auburn in 2013 for the only blemish on the Tigers’ schedule until the BCS Championship Game loss to Florida State in Pasadena.

Not only did LSU win 35-21, but the game was really never that close. Auburn will tell you that they were unaware that Nick Marshall was the best cornerback to ever play quarterback at this point of the season and based on how the season finished, it’s hard to prove they are wrong.

LSU wants to prove the dominant win was much more than just the luck of impeccable schedule timing. It’s also LSU-Auburn, and this game is always a war.

A Team On The Upswing That Could Quickly Become ‘Playoff Contender With Win
Alabama at Ole Miss
Alabama ruined Ole Miss’ 3-0 start in 2013, which included a win over Texas in Austin, with a 25-0 win in Tuscaloosa. If the Rebels come into this game undefeated once again and can find a way to beat Alabama in Oxford, they will be on the inside track to their first SEC Championship Game and a spot in the inaugural College Football Playoff.

A Traditional Rivalry Involving Two Teams Trying To Get Back To Elite Status
Florida at Tennessee
This is just one of those games that has enough hate involved that it becomes a big game within itself, even absent of any national or conference championship implications. The winner of this game will more than likely not win the East, but it is important to note that this is the latest point of the season this game has been played since 1991 (not counting 2001 when 9/11 forced the game to be played on December 1st). This was the last season of non-division play in the SEC. The Vols and Gators have played every year since then and that’s when the rivalry really took off.

This game is normally played on the third Saturday of September, which usually served as the opening conference game for both teams. In essence, the losing team has been eliminated from the SEC East race before the end of September. With an early October kickoff, this game will now be a true springboard to midseason for the winner.

The pressure will be on Tennessee, who’s trying to avoid losing the 10th in a row in this series. The Vols’ last win came in a thriller in 2004 when James Wilhoit missed an extra point from 20 yards late in the fourth quarter before getting a chance at redemption from 30 yards further out and nailing the kick with :06 remaining. A Volunteer victory over Florida could provide as much momentum as the five-game losing streak-ending win did in 1998.

No, a win over Florida may not lead Tennessee to an undefeated season and national championship, but it could wipe out a slew of back-riding monkeys. The loss for Florida could open Will Muschamp’s office door, giving those same monkeys a new prospective home.

The Other Games
Texas A&M at Mississippi State
The Bulldogs should be 3-1 at worst, and with an upset win over LSU, they could be on fire and coming off a bye week. This A&M team could be in the midst of proving Kevin Sumlin naysayers wrong. Sumlin did wonders with Case Keenum as head coach of Houston and he will now have to prove his chops PJ (Post Johnny). It’s not out of the question that A&M wins the opener at South Carolina and beats Arkansas in Arlington on September 27th, sending the Aggies into Starkville with a 5-0 record.

Worst case scenario, this game will be a Separation Saturday type of game. Even if both teams come in with a couple of losses each, this game will be one of those that gives hope for a salvageable season to the winner and doom and despair to the loser.

Vanderbilt at Georgia
There aren’t many times in the history of the SEC where one of the elites of the conference plays in a game where they want revenge, but Georgia finds itself in that situation on this October 4th weekend.

If the Bulldogs allow Vandy to make it two years in a row, the SEC East will be as wide open as the Commodore wide receivers were the vast majority of last year’s game on the wet and rainy turf of Dudley Field.

South Carolina at Kentucky
Speaking of teams that could make the jump from really good and very promising to elite in 2014, Steve Spurrier has the Gamecocks poised to claw its way to Atlanta and sneak into the College Football Playoff.

We’ll know more about South Carolina and Georgia by this point of the season than basically any other team in the conference. The Gamecocks will have already played Texas A&M (August 28th), East Carolina (September 6), Georgia (September 13th), at Vanderbilt (September 20th) and Missouri (September 27th). The best news for Carolina–four of their first five games are at Williams-Brice Stadium.

This game may just be the prime game for an upset if Mark Stoops can take advantage of South Carolina as they are looking back and admiring/second-guessing the previous five games. Remember the 2010 SEC East Champion Gamecocks that beat No. 1 Alabama and lost to Kentucky in Lexington the next week? Remember the 2011 Gamecocks that were 4-0 and on their way to the first 11-win season ever in Gamecocks history before losing to an awful Auburn team in Columbia? They fell apart inside the meat grinder of back-to-back weeks at LSU and at Florida in 2012 for their only two losses of the 2012 season. Then there’s 2013 Tennessee.

In other words, 2014’s Head-scratcher Carolina Game of the Year could be right here in Lexington.

Excited for October 4th yet?

OK, so this is the best SEC weekend… which is the best overall weekend (all games)? Is it week 1? Rivalry week? Championship week? Besides those 3 weeks, which would be the next best week? Inquiring minds want to know – maybe you could rank ALL of the weeks from best to worst!

Stay tuned. I’m writing a 43,000-word article ranking the best weekends over the next three years. All 52 weekends.

Nice T! Hokie – the best SEC weekend determins which SEC team goes to the championship to win it all, so this may be the weekend you are inquiring about. Last year they were just represented by chumps that had their shoes tied together.

Sure… just like the SEC won it last year, right?

You know, they say dinosaurs once ruled the earth, too…

Sorry, nobody offers to write about the MWC. :(

I see yet another fan has fallen asleep watching SEC football.
No OFFENSE intended.

Jinzzzzzzzzzzzo brining the heat. A nice repeating of the Z with the trailing ellipses… Very well done. Great style and delivery.

Tennessee beats Florida in a embarrassing way. Needless to say, it will be the game that decides the fate of Will Muschamp…