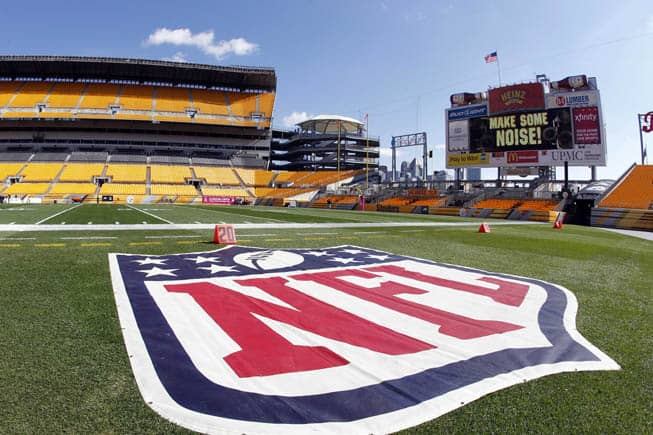 UPDATE: The 2014 NFL Schedule will be released on Wednesday, April 23 at 8pm ET.

The 2014 NFL schedule appears to be set for release on Wednesday, April 23 or Thursday, April 24, several sources have indicated.

Today was reportedly the target date for the release according to ProFootballTalk, but they now indicate a Wednesday or Thursday release.

Another source indicated to FBSchedules.com that the schedule release could come tomorrow (Wednesday).

Earlier this month, NFL spokesman Greg Aiello indicated in an email to PFT that the league was aiming for a “normal target” for it’s annual schedule release. That target is usually mid-to-late April.

While we don’t know the dates of the 2014 NFL games, we do know the opponents for every team. You can also view those opponents on each team’s 2014 schedule (see below).

The 2014 NFL schedule already has three matchups set — the International Series at Wembley Stadium in London, UK. Miami will face Oakland on Sunday, Sept. 28, Detroit will face Atlanta on Sunday, Oct. 26, and Dallas will take on Jacksonville on Sunday, Nov. 9.

The Super Bowl XLVIII champion Seattle Seahawks will also host the season-opening game against a team to be determined on Thursday, Sept. 4.

The 2014 NFL Preseason Schedule was released on April 9.

I look forward to the big release! Any guesses on who the Seahawks will open up the season against? Personally, I think that it will be a rematch of last year’s Super Bowl and it would be a great opportunity as well as a ratings bonanza for the NFL & NBC because the opportunity for the Super Bowl Champion and Super Bowl runner up to start off the regular season doesn’t happen very often.

Matt, looks like Denver, Dallas, Green bay, or San Fran will be the 1st game. All are high ratings for the NFL

I agree. I thought the same thing. My dad does not think it is going to happen. I have no idea. I love this day.

Probably not the Broncos. Broncos play their last preseason game on the road, Seahawks/Broncos already play in Week 1 (preseason) anyway, and they’ve only started the season with a SB rematch (1970, Chiefs/Vikes in merger season) anyway.

I’d say they do it either opposite World Series Game 4 (although Sounders’ regular season finale is previous day at CL so that’s a bit iffy) or the Sunday before Thanksgiving. I’d go with the latter.

BTW, the coaches in the last SB rematch before this one? Mike Holmgren (GB) vs. Pete Carroll (NE). Highly appropriate the Hawks are in the next one

I’m gonna go either Cowboys or Pack with Cowboys winning out. Jerrah has successfully lobbied the league to put the Cowboys on national TV (either on SNF, national late game, or the opener) every year since realignment–with the exception of a regional early game against TB in 2009. Packers/Hawks would have the SB 45 and 48 winning QBs but you know that the “Fail Mary” hype would overshadow it all–nevermind that with Golden Tate and M.D. Jennings either gone to or elsewhere in the NFC North it’d be difficult.

Whoa, Broncos week 3 and only a CBS late game? First SB rematch since 97 and it’s only a DH game?

Other than that, bring it. RW vs RGIII/LOB vs D-Jax on MNF? let’s rock

Yeah. I thought that Broncos @ Seahawks would have at least been a Sunday Night Football game if it wasn’t going to be on opening night.

I haven’t kept track but Broncos vs Seahawks will meet 3 times in the calender year 2014: Super Bowl , Preseason, Regular season.