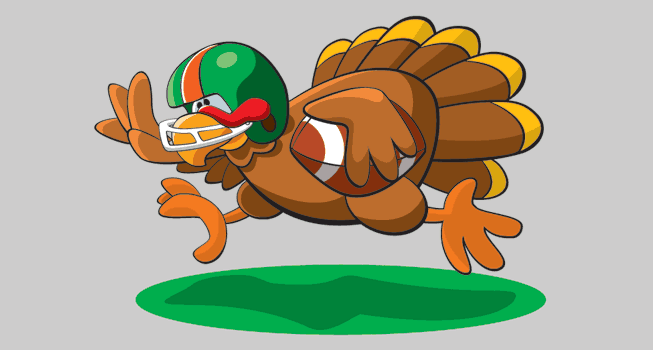 Some of the top college rivalry games this week include Clemson at South Carolina, Ohio State at Michigan, Oregon State at Oregon, Florida State at Florida, Georgia at Georgia Tech, and Washington at Washington State.

ESPN Gameday will broadcast live from Auburn, the site of the match-up between the top-ranked Alabama Crimson Tide and the fourth-ranked Auburn Tigers.

There are also some great NFL games this week, highlighted by three Thanksgiving Classic games: Green Bay at Detroit, Oakland at Dallas, and Pittsburgh at Baltimore.

Listed below are the games with time, TV network, and online streaming. For college games, the current BCS ranking is listed in parentheses.

Bout Time II﻿ Thanksgiving Day dinner is in the works and here are some of the games we will be showing throughout the weekend.
Tonight (Tuesday)is Karaoke,
WEDNESDAY: is Crown-N-Down,
THURSDAY: we open @ Noon and Serve a FREE Thanksgiving Dinner about 1pm until it is gone so be here early (SEE EVENT FOR MORE DETAILS,
FRIDAY: is the BLACK FRIDAY ESCAPE PARTY,
SATURDAY is the ever famous ART & WINE Showing 4pm-8pm, where you can get some great Christmas gifts.+ throughout it all some great football, and social time with some friends you might not have lost track of in for the weekend.
SUNDAY: The Lone Star Bear Toy Drive 4pm-8pm along with $1.50 on certain Draft +$5 pitchers
Thank You for your business during this exciting weekend!
You can also plan your Christmas Party’s or any other event for the holidays @ Btii Austin﻿
512-419-9192

Idaho at New Mexico State has been dropped by Aggie Vision. It will not have any TV broadcast or online streaming, outside of radio, available.

Games on FOX can be watched on the FOXNOW app