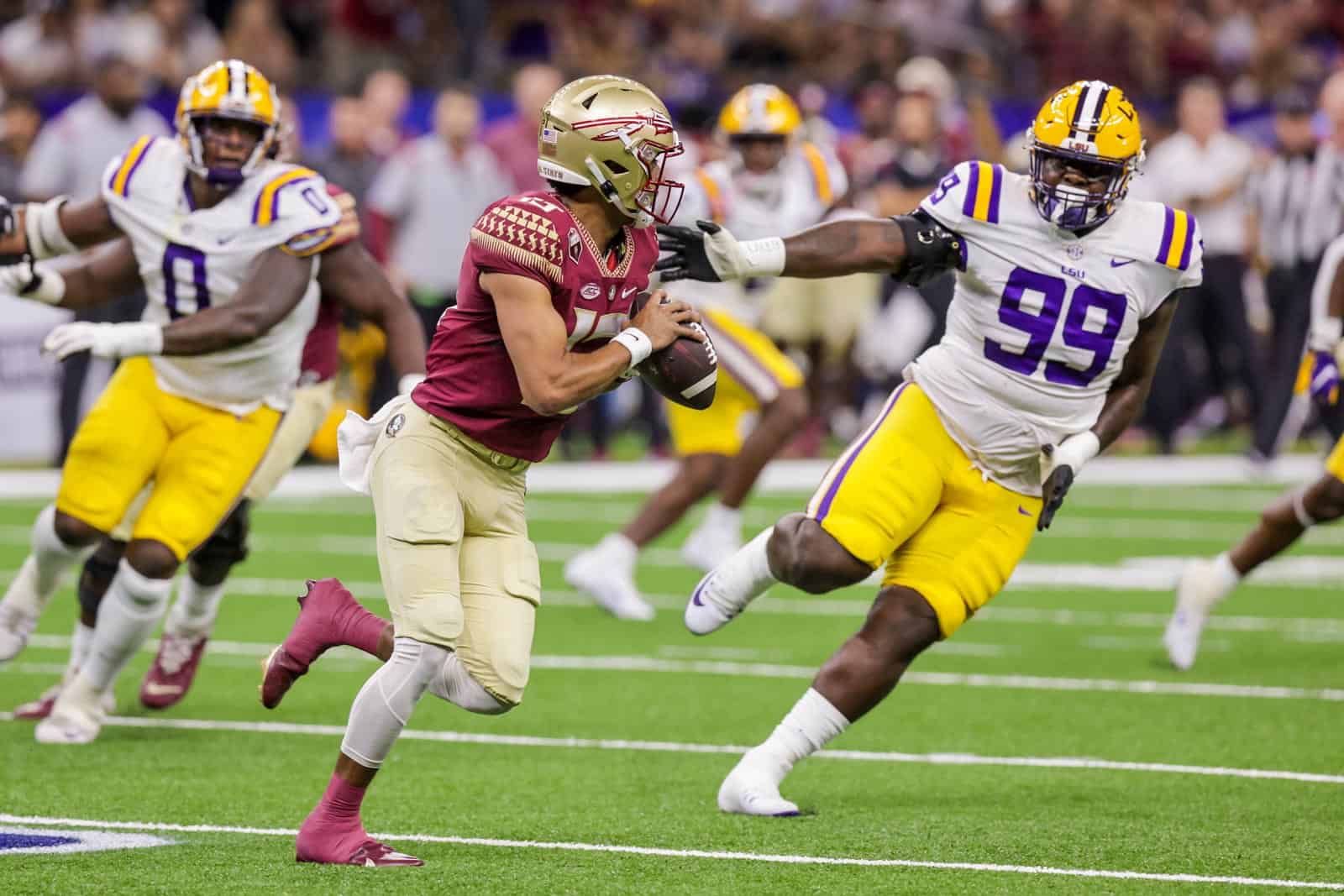 And just like that, the 2022-23 College Football Playoff National Championship is in the books and we’ve all suddenly become NFL enthusiasts.

But before you bid a fond farewell to the fairest sport in the land, feast your eyes on the following handful of matchups, a cornucopia of non-conference goodness that lies just seven months into the hazy future.

Deion Sanders in his first non-conference game as an FBS head coach vs. 2022’s version of Cinderella, aka the guys who fell one pummeling vs. Georgia short of shocking the entire world. Tune in to this one to see not only who has the most to prove, but who can back it up on the field. These two have only met once previously, in last season’s opener – before Sanders was even an afterthought in Boulder and when the Horned Frogs were still picked to finish No. 7 in the Big 12 – a 38-13 win for TCU.

More than just a battle of the Carolina’s, these two both have what it takes to be mentioned in the preseason Top 25, meaning this could be one of the first ranked vs. ranked battles of 2023. The duo has met 59 times previously, most recently in the 2021 Duke’s Mayo Bowl. The Tar Heels lead the all-time series 35-20-4 but the Gamecocks have won four of the last five. The two shared membership in both the Southern Conference (1922-52) and the ACC (1953-70). They have plans to meet again in 2028/29.

The renewal of a long-lost rivalry that vanished when Penn State relinquished its independence for membership in the Big Ten in 1992, the Mountaineers and Nittany Lions met annually from 1947-92 and haven’t played since. Overall, they’ve clashed 59 times making the series the third-longest in Penn State’s football history behind Pitt (100) and Syracuse (71). The Nittany Lions hold a commanding 48-9-2 and have won four-straight. The two will meet again next season, this time in Morgantown.

This matchup marks only the third time in history – and the first time since 1987 – that the two Miami’s of the FBS have clashed on the gridiron. All three previous meetings were played in Miami, Florida, with the Hurricanes coming out on top. And though the most recent game was a decisive 54-3 win for the Floridians, the other two games – played in 1945/46 – were 27-13 and 20-17 decisions respectively. But wait! There’s more. While the ‘Canes are a perfect 8-0 all-time vs. the current membership of the MAC, the Redhawks haven’t beaten an opponent that was an ACC member at game time since upsetting then (14) Virginia Tech 24-17 in Blacksburg in 1997.

While this one feels like it might be a better matchup if it were still the 1990s, the prognosticators over at ESPN have both of these clubs ranked in the Top Ten in their Way-Too-Early Top 25, making this pairing Week 1’s official blockbuster. A rematch of the 1968 Peach Bowl, the Seminoles and Tigers have met ten times previously most recently clashing in last season’s opener, a narrow 24-23 decision in favor of FSU in New Orleans. Florida State also holds a commanding 8-2 advantage in the all-time series, LSU’s only wins coming in the 1968 contest and in a regular season game in Baton Rouge in 1982.

While we know that Alabama’s Bryce Young and Will Anderson, Jr. won’t be back, Nick Saban is back, Steve Sarkisian is back, and Arch Manning will, at long last, be not back, but there. Does that mean Texas will finally be back? Like it or not, this one should be a ranked vs. ranked matchup. Texas and Alabama have met ten times previously with the Longhorns holding a commanding 7-2-1 lead in the all-time series. The Tide’s only two wins came in the last two meetings – the narrow 20-19 decision in Austin last year, and a 37-21 victory in the 2009/10 BCS title game.

After beginning 2022 ranked No. 6 and No. 16 respectively in the preseason AP poll, the Aggies and Hurricanes combined for a uber disappointing 10-14 record last season. It makes this matchup a litmus test for whom, if anyone, has righted their ship during the offseason. The duo has met four times previously, most recently last year, a 17-9 win for A&M in College Station. The series is deadlocked at two wins apiece.

Not only did these two yard-getters finish last season ranked in the top 25 nationally in total offense – they both landed in the bottom half of the FBS in total defense. They’re also both mentioned in ESPN’s Way-Too-Early sweepstakes, the Ducks at No. 9, and the Red Raiders at No. 23. Prepare to be entertained! The pair have met twice previously, a home-and-home in 1991/92 – both wins for Oregon – and will clash again in 2024, this time in Eugene.

A rivalry clash that we haven’t seen since 2012, Cincinnati and Pitt play for the Paddlewheel Trophy in a game that’s called the “River City Rivalry.” Both labels pay homage to the shared connection as major cities on the Ohio River. The trophy was introduced in 2005 when the Bearcats signed on with the Big East, joining a Panther program which had been a member since 1991. The duo clashed eight consecutive times as conference foes, each squad taking home the Paddlewheel four times. The active rivalry ended in 2013 when Pitt joined the ACC and Cincy migrated to the American. The trophy itself – a functional ship’s telegraph that lights up with the annual winner’s logo – is a whopper, standing four feet tall and weighing in at almost 100 pounds. The Panthers lead the all-time series 8-4 but the Bearcats have won four of the last five. The two will meet again in 2024 in Cincinnati.

While the Utes – aka the reigning Pac-12 champs – open 2023 with a visit from Florida, its Week 2 trip to Waco to play Baylor might be the better half of what’s perhaps the toughest opening combo in the Power 5 ranks. Both the Utes and Bears are up-and-comers and contenders who rarely get the hype and headlines they’ve earned. This is Utah and Baylor’s first-ever football affair, they’ll meet again in 2024 in Salt Lake City.

With both clubs mentioned in ESPN’s Way-Too-Early rankings – Tulane at No. 19 and Ole Miss at No. 20 – this could be one of the more intriguing early-season Top 25 matchups. It’s also a clash between two old rivals with 70 previous meetings including consecutive games from 1950-65 and 1978-92. The Rebels and Waves shared membership in the Southern Conference from 1922-33 and the SEC from 1933-65 when Tulane declared its independence. The Mississippians lead the all-time series 42-28 and have won ten straight including, most recently, a 61-21 tour de force at home in 2021. Tulane last won in 1987/88. They have plans to meet again in 2025 in Oxford.

For this blockbuster to be everything it can be – a Top Ten matchup with a jolt of upward trajectory awarded to the winner – Notre Dame must beat Navy in Ireland and then down FCS Tennessee State and Central Michigan while Ohio State opens with wins at Indiana and then vs. FCS Youngstown State and Western Kentucky. A rematch of the 2005/06 and 2015/16 Fiesta Bowls, the Irish and Bucks have met seven times previously with Notre Dame’s only two wins coming in the first two games of the series – a home-and-home in 1935/36.

What this matchup lacks in curb appeal it makes up for in historical significance. Though Army edged Missouri 24-22 in the 2021 Armed Forces Bowl, it hasn’t visited an SEC opponent since 2011, falling 44-21 at Vanderbilt. It hasn’t tasted victory at an SEC venue in 33 years, or since 1990 when it, again, made the trek to Nashville, this time scoring a 42-38 win over the Commodores. For LSU it’s only the second time in history that it’s played one of the three service academies. The only other action came 93 years ago, in 1930, when it visited West Point and got blanked 20-0 by Army. This season’s rematch with the Black Knights is the Tigers’ opportunity to not only score their first win in school history over Army, Navy, or Air Force, it’s also a chance to score their first-ever football points vs. one of the FBS academies.

Not only should this be one of the better late-season non-conference fixtures, it’s the final opportunity to see these two play in the regular season until 2027/28 (and then 2031, 2034, and 2037). A rematch of the 2020 ACC title game and the 2018 Cotton Bowl, Notre Dame and Clemson have met seven times previously. The Tigers hold a 4-3 advantage in the all-time series but the two have split the last four.

ARMY vs. NAVY – in Foxborough, Mass.

According to the Military Officers Association of America, in 2023 Massachusetts becomes only the seventh state to host Army/Navy.

Navy leads the all-time series 62-54-7 but Army has won five of the last seven including last season’s game, a 20-17 victory in double overtime.

Don’t see much to get excited about, really.

“… and we’ve all suddenly become NFL enthusiasts.”
IMO,
that phrase was the most entertaining part of this Way Too Early kristall Ball 🏈 Article about interesting Non-conference Games in 2023.

No Backyard Brawl or Colorado-Nebraska? Definitely excited for those.

I’m excited to see BYU in Fayetteville on 9/16!

Me too. We don’t have 11.5 Years of Trust Five Conference $$$$$, Facilities, Trust Five recruit Testimonials, Results like our Rival Utes do. We’ll see what big Boy Competition is after Sam Houston State U. transitioner & Southern Utah U. 63 Scholarship home Field $$$$$ Games are complete.

How “dominant” will UFL play outside their protected SEC Backyard?

No games were missed. These are 16 games the writer selected and it’s not a Top 16.

Not nearly as many good games next year.

That would be a conference game, not non-conference.

Just a heads up, Virginia Tech was actually in the Big East in 1997.

App State rematch with UNC. One of the best games in all of 2022