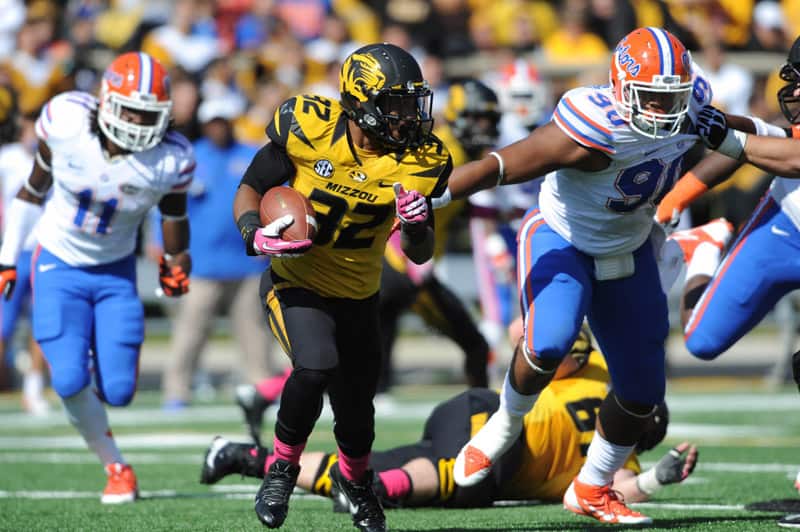 Did you know that Missouri, Illinois and Baylor all lay claim to staging the very first homecoming festivities?

Though each of the three FBS schools may be able to legitimately say they were the first, none can say that their 2014 edition of the 100-year old tradition is the best—Missouri hosts Vanderbilt on Oct. 25, Illinois hosts Minnesota on the same Saturday and Baylor celebrates by welcoming Kansas on Nov. 1.

The three matchups reflect the tendency that many schools have in scheduling homecoming celebrations— do it when the football team is playing a game that they will win.

Though nothing delights the home crowd like sweet victory, what might be even better is a big-time game against a formidable foe. Instead of a sure win, why not fire up the returning alumni with a true test of football readiness?

Following is a list of the 12 best homecoming games of 2014, contests that reflect a certain swagger on the part of the event planners.

Though not anywhere near a “game of the year” candidate, Stanford vs. Oregon State is a solid divisional matchup that could prove meaningful in the race to represent the North in the Pac-12 title game. Plus, it’s another go at watching David Shaw’s swarming defense trying to contain Mike Riley’s prolific passing attack.

Stanford hosted UCLA for its homecoming festivities last season, a game it won 24-10.

Ole Miss and Tennessee have been squaring off since 1902. Even though the Volunteers lead the all-time series 44-19-1 they have only beaten the Rebels once (2009, in Oxford) in the last 14 tries. There’s lots to like about this one: two up-and-coming coaches leading programs who are underdogs in their respective divisions, both needing a conference win and both counting this one as achievable. Plus, the two haven’t met since 2010.

Ole Miss welcomed Auburn to Oxford last season for homecoming and suffered a 30-22 defeat to the Tigers.

If you like a cocktail of yards mixed with revenge, Oklahoma State–West Virginia is for you. Not only does this homecoming celebration pit two offensive-minded coaches against each other, it’s the Cowboys chance to make right what went wrong last season. Oklahoma State was ranked No. 11 in the nation when it traveled to West Virginia in Week 5 as 19-point favorites, only to leave with a 30-21 loss that dropped them to No. 21.

Oklahoma State planners were equally ambitious last season when they invited TCU over for homecoming, a game it won 24-10.

Charlie Strong’s first homecoming at Texas will feature a matchup between his Longhorns and the Mountaineers, a team that has only visited Austin twice in history (2012 and 1956) and won on both occasions. Though Strong is more defensive minded than his predecessor at Texas, look for this one to still feature lots of points—the two averaged 40-plus points each per game in their last two meetings.

The Longhorns had it much easier last season at homecoming time, drawing Kansas and winning 35-13.

Chris Petersen’s homecoming debut at Washington will come against Arizona State, a legitimate contender in the South that beat three ranked teams and went 10-4 last season. The Huskies are 0-8 against the Sun Devils since 2002 and last scored a win in Seattle in 1999 when they won 28-7.

TCU’s homecoming festivities with Oklahoma State come straight off a two-game run vs. Oklahoma and at Baylor, so if nothing else it will be well-seasoned by the time the parade gets underway. The Horned Frogs haven’t beaten the Cowboys since 1992 when they won 13-11 in Fort Worth.

TCU invited Kansas to homecoming last season and won 27-17, despite being 24-point favorites.

You’ve got to give whoever schedules games at Kansas State a lot of credit. Not only do they continue to book quality non-conference games (2014 Auburn, 2012 and 2011 Miami Fla., 2010 UCLA) they invited Texas for homecoming this season. K-State is 3-0 against Texas in Manhattan since 2006 and hasn’t dropped a home game to the Longhorns since 2002 when it got nipped 17-14.

The Wildcats welcomed West Virginia to its homecoming party last season and beat the Mountaineers 32-12.

Another homecoming parade with a revenge themed float, LSU’s date with Ole Miss is a chance for the Tigers to make right the 27-24 loss they suffered to the unranked Rebels last season. Ole Miss hasn’t won in Baton Rouge since 2008, but four of the last five games have been decided by a touchdown or less.

LSU’s homecoming plans with the Rebels are a huge improvement over last season’s festivities which were anchored by a thrilling 48-16 win over FCS Furman.

If you want to see a divisional race decided and go to a homecoming dance, book a reservation for Miami Gardens to see Miami play North Carolina. By the time Nov. 1 rolls around both the Hurricanes and Tar Heels will have played Virginia Tech, the other top contender in the ACC Coastal. This game could decide who represents the division in the conference championship.

The schedulers at Miami did an equally good job of setting up something tasty for its alumni last season when Virginia Tech visited for homecoming. Unfortunately the No. 14 Hurricanes dropped that game 42-24.

Though Pac-12 North enthusiasts will be looking two weeks down the road from this game to when Oregon hosts Stanford for all the divisional marbles, don’t forget about Washington. The Huskies will have already faced Stanford (Sat, Sept. 27 in Seattle) and if they engineer an upset (they lost by three points last season and won by four in 2012), this game becomes huge. The Huskies haven’t won a game in Eugene since 2002, but their coach—Chris Petersen—led Boise State to a 37-32 victory there in 2008.

What better venue to come home to in all of America than the stunning Rose Bowl? That’s precisely where Arizona will visit on Nov. 1 hoping to knock UCLA—preseason ranked No. 7 in the Coaches Poll—off its pedestal. Don’t think so? Well, the Wildcats have managed upsets over top 10 teams in each of Rich Rodriguez’s two seasons at the helm—last year over No. 5 Oregon (42-16) and in 2012 over No. 10 USC (39-36).

Last season the Bruins invited Colorado to town for homecoming and won 45-23.

Florida hasn’t won a homecoming game since 2012 when it jumped off the parade float long enough to edge UL Lafayette 27-20. Last season’s celebrations were marred with a 34-17 loss to Vanderbilt, the first to the Commodores since 1988. This season it has Missouri, last year’s surprise SEC East champ and a key step in this season’s road to redemption. The game is scheduled between Florida’s clashes with LSU and Georgia (after a bye week) and marks a must win for the Gators.

Florida lost 36-17 to Missouri last season, but the Tigers have never won in Gainesville, their only visit coming in 2012 when they lost 14-7.

I don’t think it is scheduling against a team they can beat as much as scheduling against an opponent that may not sell out otherwise. Some schools like Texas, Florida, LSU and Oregon sellout for the season anyway; but UCLA and Miami always have a tough time drawing a crowd and prefer not to have homecomings against their top opponents. Usually it is the weakest conference opponent on hte part of the schedule while classes are in session.

This is an interesting list, should be really good games to watch for the majority case (hopefully). Missouri @ Florida might prove to be one of the better games of the season and a determining factor for the SEC East but that’s still a big maybe, Florida still has a lot of questions to answer after last seasons disaster but I expect major improvement this season going from 4-8 in 2013 to 8-4 or 9-3. We’ll see happens. Missouri is what interests me more, after a not so impressive first year in the SEC East to a fantastic 2nd that saw them nearly win the SEC title and edge out former rival OK State (who also had a pretty good season) they could be primed to take the East again or at least make the top dogs earn it. One thing though for Mizzu is that they play UCF at home earlier in the season and the result of that game could have a huge impact on the rest of their season for a loss to UCF won’t look to good on the resume.

Ole Miss didn’t host Auburn last year, they faced them on the road.

I would pick Minnesota over Illinois and think closely about Vandy-Mizzou. I am not sure that it is fair to call those easy wins.

Now, I am a Vanderbilt fan, and we host FCS Charleston Southern for homecoming. Now that is an easy win.

The article says that West Virginia has only visited Austin twice, and lost on both occasions. Actually, the Mountaineers WON both trips to Austin.