Would an undefeated Houston make the Playoff over one-loss Oklahoma? 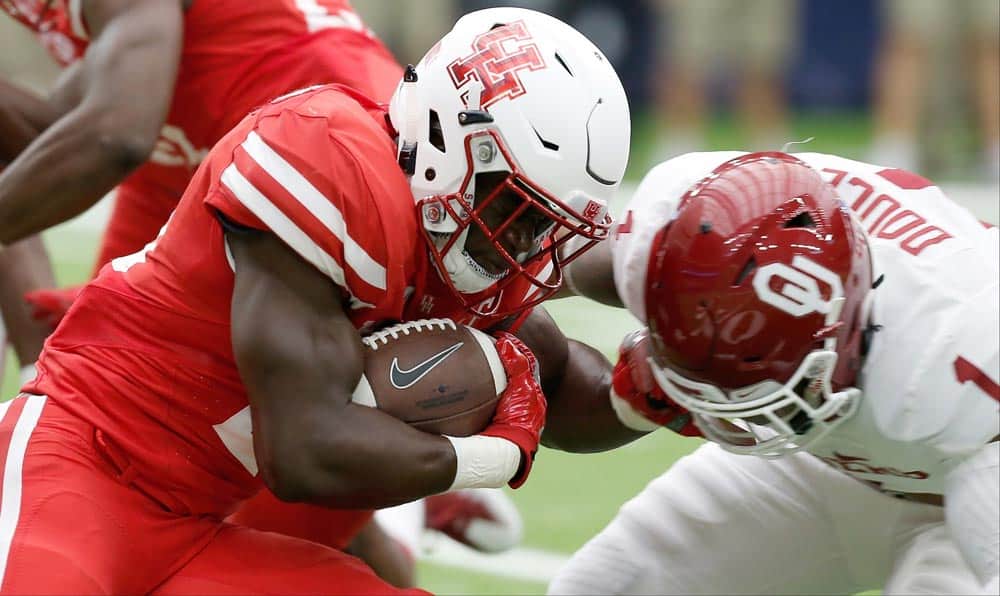 While there is no doubt that Houston deserves the accolades it’s garnered for upsetting No. 3 Oklahoma, is the Cougars’ 2016 schedule seriously worthy of a Playoff slot?

In ESPN’s Heather Dinich’s opinion, “If the Cougars go undefeated, there’s no question the selection committee would seriously consider them for the top four.”

Let’s say, for instance, that Alabama wins the SEC by running the tables and Florida State topples Clemson and breezes through the rest of its ACC slate and bests Florida. Then, Michigan beats Ohio State and wins the Big Ten and Stanford captures the Pac-12, but suffers losses to Washington and Notre Dame. Over in the Big 12, Oklahoma roars back after its Week 1 loss and strings together 11 consecutive wins to finish 11-1.

Alabama, Florida State and Michigan are in. Stanford is out. The final slot comes down to the one-loss Sooners and Houston, which also runs the table and posts a 13-0 mark after beating Cincinnati in the American Athletic title game.

Who gets the nod?

The committee has been clear about the criteria it will use to make its decision—“Championships won. Strength of schedule. Head-to-head competition. Comparative outcomes of common opponents.”

So, the Cougars get one point for beating Oklahoma straight-up. Both get a point for winning a conference crown. Since the two programs don’t share any common opponents this season, it will come down to strength of schedule.

First, the Sooners will play five times, think about that, five times more Power opponents than will the Cougars. If both teams are playing at the same level, it means, theoretically, that Oklahoma has a five times greater chance of losing in 10 of the 12 weeks than does Houston.

The Sooners earn another difficulty point by not playing an FCS school. This while Houston squares off with the Lamar Cardinals, a program that’s only posted a winning record once in the last 16 tries.

Other than the Sooners, the only other currently ranked team that the Cougars will face this season is Louisville at No. 13 in the latest AP poll. That game doesn’t happen until Nov. 17, after the Cardinals host No. 3 Florida State and travel to No. 2 Clemson. It’s reasonable to assume that unless Louisville is a Top 5 team in hiding, it will move down in, if not out of, the rankings before making the trek to Houston.

As of now, the Sooners will face five additional ranked teams including No. 4 Ohio State and No. 11 Texas. In total, it’s at least three times as many Top 25 foes as what Houston will have by season’s end.

The message is clear: Oklahoma’s schedule is more difficult.

So, based on the committee’s own criteria, the two schools—13-0 Houston and 11-1 Oklahoma—would be tied.

Many would rightly argue that the tie had already been settled, on the field, in the head-to-head game in Week 1. But, don’t forget that committee set a precedent on straight-up wins in 2014. The only difference is it decided a series of rankings as opposed to a Playoff spot.

Baylor outlasted TCU 61-58 in Week 7 of the 2014 season. By the time the first CFB Playoff rankings were first released in Week 10 both teams were 6-1 but, despite the head-to-head win, the Bears came in at No. 13 while the Horned Frogs were No. 7.

This went on, TCU ranked higher than Baylor (despite even records), until the Week 16 rankings, the final standings coming into the Playoff. The Bears (now 11-1) were fresh off beating No. 9 Kansas State and the Horned Frogs (also 11-1) had just blown out Iowa State. This prompted the committee to move Baylor up one spot to No. 5 and TCU down three to No. 6.

It was an empty victory for the Bears, who fell just out of the top four and therefore didn’t make the Playoff (Ohio State’s shut out of Wisconsin in the Big Ten title game propelled it into the coveted No. 4 slot).

The series of choices set a precedent—strength of schedule trumps head-to-head wins in the rankings that decide which teams make the playoff. It was what compelled the committee to rank Baylor lower than TCU even after the head-to-head win, and ultimately what that kept the Bears out of the Playoff.

So, what would the committee do in the case study of Oklahoma vs. Houston?

Though the Cougars would likely be considered, seriously, it’s unlikely that the CFB Playoff brain trust wouldn’t use schedule strength to justify what would be advertised as a “paper thin” verdict for the Sooners.

Their body of work would be arguably more impressive as would winning the Big 12 vs. winning the American Athletic.

If you’re still not convinced, think back to TCU and Baylor. The Bears beat the Horned Frogs, on the field, and were still ranked lower, by the committee, for six consecutive weeks. Given that the two schools play in the same conference, their schedules were very similar. The big exception was that Baylor didn’t play a Power team out of conference while TCU played Minnesota. That was enough to give the Horned Frogs the edge with the committee.

Houston and Oklahoma, on the other hand, are almost on different planets from a scheduling standpoint. It affords the committee an easy way out, because the disparity is so obvious and they’ve gotten away with it before.

Conveniently, the wide gap in schedule strength would also serve as the perfect cover-up for another, even more controversial issue. Like in the case of Ohio State vs. Baylor, Houston is a less-attractive partner financially for the Playoff. In other words, Oklahoma draws more national viewership and has a bigger fan base more prone to travel.

This silent point, never to be listed in the committee’s criteria, goes to the Sooners.

Strength of schedule is why it is unlikely that any Group of 5 will ever make it into the CFB Playoff. That is, until there are more than four slots to fill.

It’s both a justification and an excuse.

“It’s both a justification and an excuse.”

Yep, What’s the point of Houston playing an Oklahoma, winning by 10, going undefeated the rest of the season, winning they’re conference & conference championship & not making it to the CFP? It really depends on how (if) Oklahoma can run the table, how they win their games, scores, did they struggle…etc. The eye ball test will play a big factor in this at the end of the season, if Houston can beat their opponents by 30+ a game & beat a very good Louisville team, they still have to over come the other conference champions & favoritism from the Bama’s, Sooners, Clemson…etc, fans that will travel like the article says but if the Cougars loses then it is over for them anyways.

Excuse me………………..the Buckeyes will take the seat you are talking about.

It won’t matter. Oklahoma will have more than one loss before the season is over.

The question is would a 12-0 Houston get in over a 12-1 Stanford, Washington, Florida State, Michigan, say Georgia or take your pick from Baylor/Oklahoma/Texas/TCU winning the Big 12.

The answer is no. Houston’s SOS require OU to run the table and Louisville to be a 10 game winner, and for the SOS of all those P5 to be well below norm. That wont happen. The SOS will kill UH as will the lack of quality opponents. And even if they manage to be 3rd or 4th in the polls the committee and computers will push UH to the 5th slot.

The entire system is designed to lock out a hot G5 school like Boise State under Petersen (now UW coach) or Houston under Herman (who’s P5 coach will he be in January?). That wont change.

3. I’d take more stock in this article if it wasn’t authored by a Big XII team supporter.

“First, the Sooners will play five times, think about that, five times more Power opponents than will the Cougars. If both teams are playing at the same level, it means, theoretically, that Oklahoma has a five times greater chance of losing in 10 of the 12 weeks than does Houston.”

So every P5 school is 2x as difficult as every G5 team? Gimmie a break. Yes, they’re in no question.

yes, to a 13-0 Houston team being above Oklahoma in the CFP….but not over a 5 loss SEC squad….

I’d say the committee can say the same thing they said before. Houston, you won a Conference Championship Game. That’s an extra data point. The XII doesn’t have a conference championship game, and that matters.

One thing to think of is the human element. While the stats regarding SOS may back up your point, the committee may take Houston instead due to the critical backlash (and potential political backlash) that would occur in this scenario. Remember that when Utah was left out of the BCS, Senator Orin Hatch got involved to press the case which eventually led to changes in G5 access. With the committee now in place, do they risk a similar situation.

Head-to-head win should have much more weight.

Indeed Yang, a better what if scenario would be a conference champion Texas with one loss vs. an undefeated Houston. Who goes then, when there’s no head to head?

Sorry, no. If Houston is perfect and Oklahoma lost to Houston, Houston should go and Oklahoma should learn to take their non-conference games more seriously.

schedule doesn’t matter as much as head to head takes care of it…And this is biased. Power 5 team doesn’t automatically mean good. There were 5 teams ranked in the top 25 from the AAC last year. That doesn’t come easy as voters always want teams to prove it if your from the G5 (unlike teams like Florida who get gifted rankings). By the end of the Year USF will also be ranked and high too so that’s another ranked opponent Houston faces. No way Oklahoma hops Houston (assuming Houston goes undefeated and OK runs the table).

ou should end up with at least 3 loses…..Houston, Ohio St and TEXAS….so none of this will be an issue

Don’t think your plan accounted for Louisville crushing FSU 63-20. If both remain undefeated UofH can knock off 2 top 5 opponents. That should be plenty to give them a much deserved shot at the playoffs.