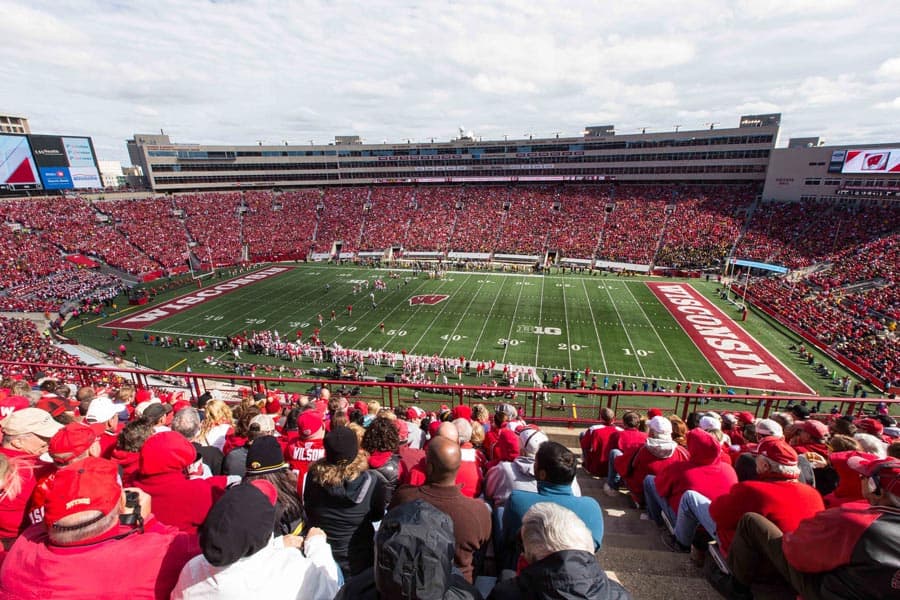 The Wisconsin Badgers will host the Western Kentucky Hilltoppers to open the 2018 season, the school announced on Tuesday.

Wisconsin will host WKU at Camp Randall Stadium in Madison on Sept. 1, 2018. The game will be only the second-ever meeting between the two schools following a 24-6 Badger win at home back in 2001.

As part of the contract, Wisconsin and WKU will also play a home-and-home series in basketball.

“You have be creative in what you’re doing with scheduling – to fill your schedule and match the open dates with someone else,” UW Director of Athletics Barry Alvarez said. “Sometimes you have to do these things to make it all work.”

In Big Ten action, Wisconsin will host Nebraska, Illinois, Rutgers, and Minnesota and will travel to Iowa, Michigan, Northwestern, Penn State, and Purdue.

“This is an exciting series for our football and men’s basketball programs,” WKU Director of Athletics Todd Stewart said. “We are actively attempting to improve our men’s basketball non-conference home games and hosting one of college basketball’s top programs will make Diddle Arena the place to be on December 12, 2018. Camp Randall Stadium is one of the nation’s best and most historic football venues, and our trips to Madison for football and basketball games present unique opportunities for our fans to see us compete against an outstanding Big Ten program in a terrific environment.”

Western Kentucky now has two non-conference games announced for the 2018 season. The Hilltoppers are also slated to visit Ball State on Sept. 22.

If this were an SEC team we would see 10 post about cupcakes. Go Toppers whip the Small 10!

No we only deride the SEC schools when they schedule the Div I-AA schools. Hasn’t the SEC dubbed the third weekend in November, “Div I-AA Weekend”? They are actually marketing that I think.

WKU is not I-AA. They are a quality mid-major.

People truly do need to make up their minds, when Bama schedules W. Kentucky they get bashed, meanwhile Wisconsin does it & now they’re considered a quality mid-major….what gives? Once again, when any conferences schedule these types of games, not one word but when the SEC does, they get bashed….amazing. Hilltoppers just won the Conf. USA title & they have been proven in the past they’re not fun to play against.

Wrong, people are critical of Bama not wanting to play home-and-home series – I even mentioned how Bama bought out of the MSU series. Even if the semifinal was a joke, it’d be a much more difficult game in EL. https://fbschedules.com/2014/06/alabama-western-kentucky-2016-football-schedule/

Look at it this way, moving forward …

Shep, may be this is the reason no one is listing because you don’t have your facts straight. Alabama did not BUY OUT the series, it was mutual, Bama ask to end it & Michigan St agreed. Wrong, how would’ve of it been more difficult in East Lansing? If Bama is 5 touchdowns better then the Spartans then that score would’ve happened anywhere, now you’re are making excuses on how the semifinal was a joke. The same people that want H/N/H games don’t even attend them, it does not matter where the games are played. The best team is going to win.

It was mutual because Bama wouldn’t hold-up their end of the agreement – http://www.mlive.com/spartans/index.ssf/2013/09/source_michigan_state_didnt_wa.html

I never said MSU would win at home nor did I give any excuse for the playoff game. I was there, trust me, I’m well aware of how it went. But it all boils down to Bama not wanting to play in EL, plain and simple.

Hawaii,
Looking at it your way I still see all conferences playing one FCS game, whats the point? Not all conferences are created equal, bashing the SEC for playing smaller schools in November, great but you’re are not bashing the conferences for playing the same smaller schools in September? If does not matter when you play them, you still play & no, I don’t think the SEC is marketing the 3rd weekend in November as Div 1-AA weekend but if that makes you feel better then hey….enjoy.

Scheduling Western Kentucky is more than a quality team to schedule with what else the Badgers have on their 2018 (BYU and nine conference games). Some of you SEC fans trying to bash this or compare it to Georgia’s recent scheduling of UMass and 1-AA Murray State need to stop drinking your Kool-Aid. Western Kentucky won Conference USA last year and their bowl game, finishing with a 12-2 record. As well, WKU has won over two-thirds of their games in the past four season going 35-17. Mean while, UMass has won no conference title or even appeared in a bowl game in the past four seasons and have totaled a 8-40 record (not so good), and as for 1-AA Murray State in the past four years we have no playoff appearances and a record of 17-29 (Hmmm?????). Not a fan of Barry Alverez and his tactics, but scheduling Western Kentucky is far superior to the recent Georgia added games.