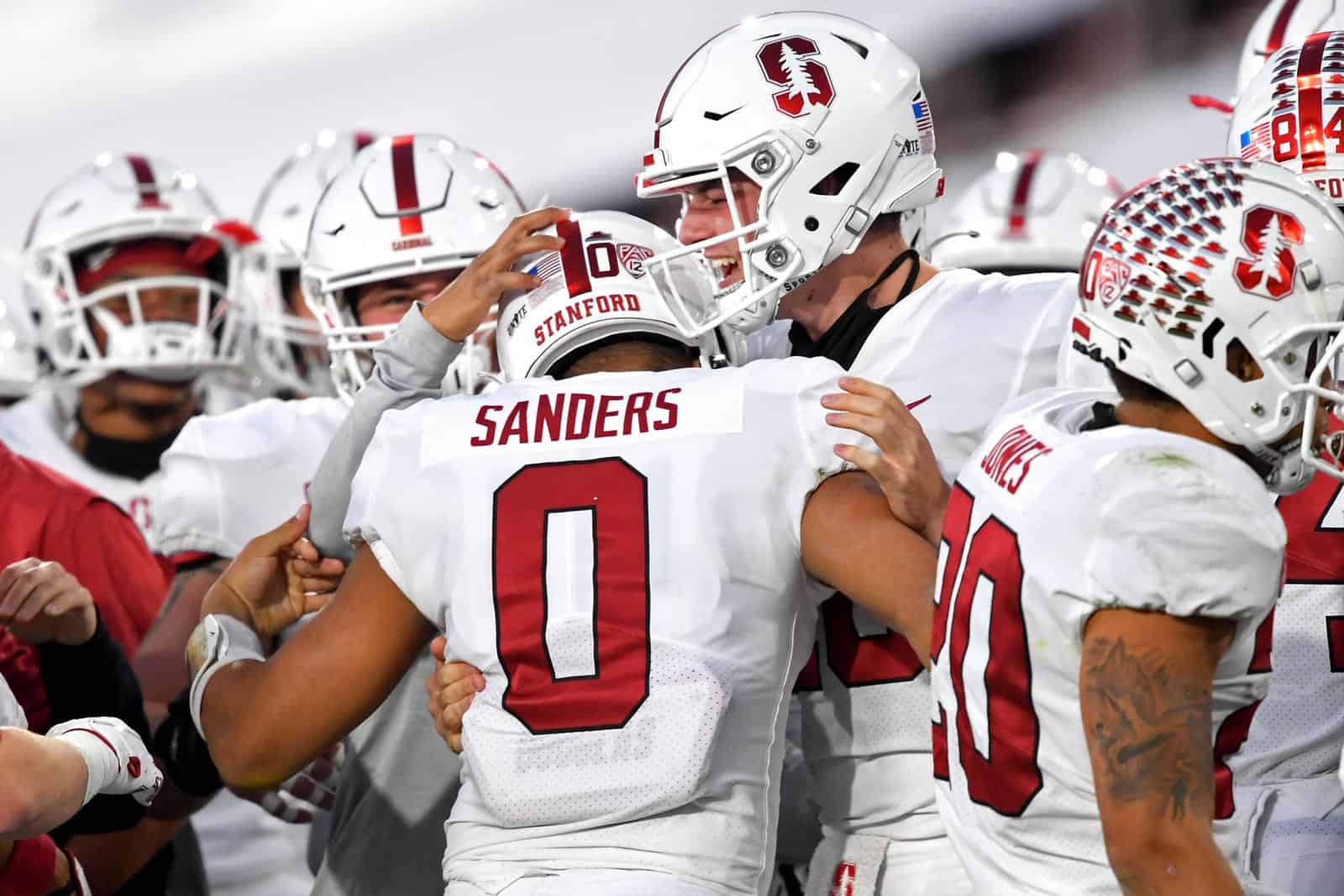 While Stanford’s on-field performance may have taken a hit recently – it hasn’t finished a season ranked since 2017 – it’s scheduling department is a clear No. 1 in 2021.

The Cardinal posted a 4-8 mark in 2019 and managed a 4-2 record in last season’s mini campaign. It’s a far cry from earning eight-plus wins from 2009-17, a run that included six double-digit finishes and seven appearances in the postseason Top 25 (four of which were Top Ten mentions).

Can Stanford make it back into the national conversation? While there are many ways to approach that question, one thing is for sure – the boys over in scheduling aren’t going to make it easy.

What if I told you that the Cardinal are the only FBS program in 2021 that will play all 12 of its regular- season games vs. a Power 5 opponent?

That’s right, not only will Stanford play the rest of the Pac-12 North (Oregon, at Washington State, Washington, at Oregon State and Cal) along with it’s cross-division opponents from the South (at USC, UCLA, at Arizona State and Utah) it will add in a Big 12 foe, an SEC team and the biggest, baddest, independent in the land.

First up, it’s Kansas State in the opener (not at home but instead in Arlington, Texas), then it’s a Week 3 roadie at Vanderbilt and then it’s the season-finale vs. Notre Dame.

If you’re thinking, “well, at least it’s not Texas, Georgia and the Irish” that’s a good point. But it’s also not FCS Montana, Michigan, and Arkansas State – which is precisely Washington’s non-conference lineup in 2021.

Will some weeks be easier than others for the Cardinal? Absolutely. That said, there will not be that “exhale” week when a Group of 5 or FCS program comes to town – the Saturday you have the luxury of thinking “at least we’ll win this weekend.”

Nope. That situation has been upgraded (or downgraded, depending on how you look at it) to “well, I hope we can beat Vanderbilt.”

To put Stanford’s scheduling feat into perspective, it – the playing of 12 regular-season games vs. programs that are currently Power 5 members (plus Notre Dame) – has only happened three times since 2006 – when the regular season was expanded to 12 games.

That’s not to say that other programs haven’t gotten close by playing 11 such opponents. In fact, that’s happened 58 times over the past 15 seasons. Not surprisingly, certain programs have consistently over-scheduled, making a practice – or at least an on-and-off habit – of playing 11 Power opponents.

The preeminent member of the scheduling hall of fame is USC – which has played 11-plus current Power 5 members (plus Notre Dame) 11 times in the last 15 years – that’s 73%. Next up, drum roll, is Stanford which has scheduled 11 such opponents nine times since 2006 (60%).

That leaves Boston College, Georgia, Georgia Tech, Ohio State and West Virginia, all of which have scheduled 11 current Power 5 opponents once since 2006.

The Pac-12 clearly leads the way in over-scheduling claiming nine of the 19 total teams (or 47%) listed. Of the only three Pac-12 members not to hit the 11-Power opponent mark two – Colorado and Utah – didn’t join the conference until 2011. That leaves Arizona as the only long-term member to not make the list.

What’s left are four ACC members, three from the Big Ten, two Big 12 programs and a singular representative from the SEC, Georgia which had 11 Power foes in 2009. That year the Bulldogs added a roadie at Oklahoma State (which was No. 9 at the time) and a visit from Arizona State to go along with their annual clash at Georgia Tech. The only non-Power opponent that season was FCS Tennessee Tech. Georgia finished 8-5 that year, the second-worst outcome of the Mark Richt era.

Other than this year’s Stanford team, the only other program to hit the 12 Power regular-season opponent mark since 2006 is USC which has done so on three occasions. What helps is that the Trojans – like the Cardinal – have a standing date with Notre Dame. That said, other programs have annual clashes with non-conference Power rivals and continue to just meet the minimum scheduling requirements by either inking two Group of 5 foes or a Group of 5 plus an FCS program.

In 2006, USC added games at Arkansas and vs. (19) Nebraska to its fixture with the Irish. In 2008, it was a roadie to Virginia and a visit from (5) Ohio State. The Trojans most recently played all its regular season games vs. current 5 Power members in 2011, adding Minnesota and Syracuse into the mix.

Compare that to the team that finished first in each of those three seasons. In 2006, Florida was No. 1 in the final AP poll. It went 11-1 in the regular season after playing eight SEC opponents, Florida State, two C-USA members (Southern Miss and UCF) and FCS Western Carolina. In 2008 it was, again, the Gators at the top of the charts after an 11-1 regular season vs. eight SEC foes, Florida State, Miami Fla., Hawaii (then a WAC member) and FCS The Citadel. In 2011, it was Alabama as the top dog, posting an 11-1 record in a regular season that included eight SEC opponents, (23) Penn State, North Texas (then from the Sun Belt), Kent State and then FCS Georgia Southern.

Seriously friends, that’s a long way from an apples-to-apples comparison. It’s reasonable to think that if USC would have dropped one Power foe each season (or played an eight-game league slate) it may have earned another national championship.

This year, Stanford’s first-ever with 12 Power 5 opponents, a mere three teams will be one game behind the Cardinal with 11: Colorado (nine Pac-12 foes plus Texas A&M, Minnesota, and FCS Northern Colorado), Purdue (nine Big Ten foes plus Oregon State, at Notre Dame, and at UConn) and West Virginia (nine Big 12 foes plus at Maryland, Virginia Tech and FCS Long Island).

Lest we not forget, when the dust settles on the 2021 season, that while all participated, not all did so at the same level.

I will commend the Cardinals for such a great schedule.12 Power 5 Games in a single year. I will cheering for them to get the honor play #13, 14 & 15!

This article pays more homage than the games against K-State and Vandy deserve. Are they playing Vandy’s men’s team or women’s team?

Although Purdue’s game with UConn is counted by the Big Ten, in no way is UConn a Power 5.

The article didn’t say that UConn was a Power 5 program. It pointed out that Purdue plays 2 non-conference Power 5 games against Oregon State and Notre Dame. Add those to their 9 B1G games for a total of 11 Power 5 games.

Stanford’s schedule is soft serve vanilla……K-State is trending down,Vandy is not a Power 5 program and Norte Dame is a paper tiger. But hey,you gotta meet a deadline I guess.

I mean not all P5 opponents are equal and in the year 2021 there are how many top-notch G5 programs?

there are numerous group of 5 teams far better than K-State and Vanderbilt……and playing a PAC12 conference schedule is hardly a murderers row.

Indeed. Even give Stanford Auburn’s “supposedly light” schedule. Play Alabama, Georgia, LSU, and Texas A&M *every* year. Get back to me especially in years where they rotate into Florida. Auburn would gladly play a PAC12 conference schedule, and throw in K-State and Vanderbilt.

I agree, too. K-State and Vandy are no better than Memphis and Marshall. I’m not really a fan of these articles that seem to disparage all G5 teams as if they’re all cupcakes.

This article suggests all G5 teams are a step down every year to every P5 team. Not true at all. How many G5 teams could have beaten that special 4-8 Stanford team in 2019? The answer is MOST of them. Heck Eastern Michigan, a team that regularly finishes in the lower half of the MAC, has beaten a G5 team EVERY YEAR since 2017 (2020 notwithstanding due to the conference only schedule). The best thing to say about Stanford’s recent scheduling method is that it likely has saved them from what the author of this article would call an embarrassing loss, and what I would call another lesson in why the labels the NCAA seems to insist we all use make no sense.