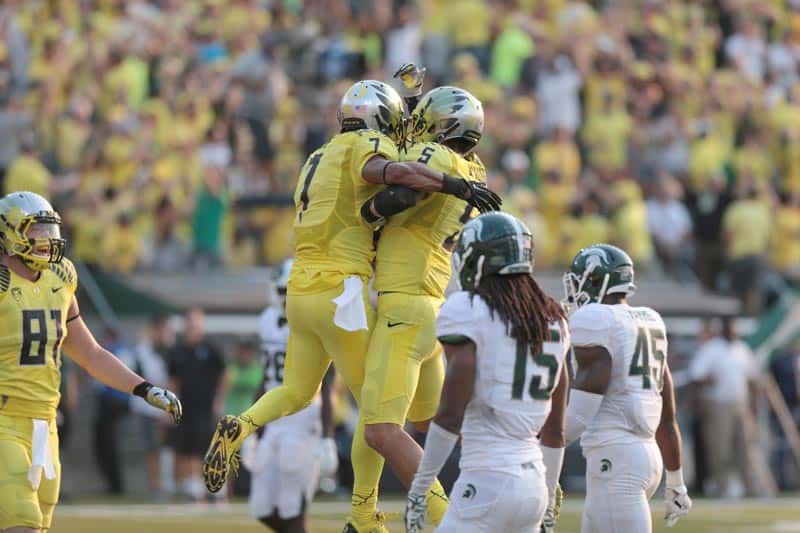 Even though college football doesn’t technically have a preseason, the first four weeks of play aren’t anything like the rest of the season when league games dominate the schedule.

The best early-season, non-conference games are those which feature power-five conference teams squaring off in what feel like bowl matchups. These are the level of competition that the SEC and ACC will require members to participate in, at least once, starting in 2016 and 2017 respectively.

Through four weeks of play this season, there have been 26 non-conference games between the 64 power-five programs (and Notre Dame), only four pitted one ranked team against another.

Here’s a look at how the power-five conferences fared against the best-of-the best in the 2014 early-season, preseason.

In the plus column for the Big Ten in 2014 are Maryland’s win over Syracuse, Indiana’s triumph over No. 18 Missouri, Iowa’s win over Pitt, No. 24 Nebraska’s victory over Miami (Fla.) and Rutgers win over Washington State.

If not for the addition of Maryland and Rutgers this season, the Big Ten would have a mere three wins over power-five teams.

What you can say about the Big Ten is that it steps up to plate in scheduling early-season games against power-fives. Here’s the tally of non-league, power-five games for each of the 14-member conferences thus far in 2014: The Big Ten—16, the ACC—9 and the SEC—7.

With no regular-season games remaining between Big Ten members and power-fives from another conference, the league won’t have an opportunity to improve on its low mark.

The Big 12’s only triumphs out of conference in 2014 came via No. 4 Oklahoma’s win over Tennessee, TCU’s victory over Minnesota, West Virginia’s narrow win over Maryland and Iowa State’s upset of Iowa.

What makes the Big 12’s performance a bit more digestible is that it lost to four of its six games to top-ranked teams: No. 20 K-State fell to No. 5 Auburn, Oklahoma State lost to No. 1 Florida State, West Virginia fell short against No. 2 Alabama and Texas lost to No. 12 UCLA.

The Big 12, like the Big Ten, doesn’t have any games remaining against power-five, non-conference foes.

The ACC deserves a lot of credit for the quality of its four wins against power-fives: No. 1 Florida State knocked off a pesky Oklahoma State squad in the opener, Boston College ran all over No. 9 USC, Virginia Tech upset No. 8 Ohio State and Duke destroyed Kansas.

As for the losses, they were quality as well: No. 16 Clemson fell to No. 12 Georgia, Syracuse got handled by Maryland, Miami lost to No. 24 Nebraska, Pitt fell to Iowa and Virginia nearly upset No. 7 UCLA.

The all-powerful SEC has only lost twice to power-fives this season: No. 18 Missouri’s shocking loss to Indiana last weekend and Tennessee’s understandable loss at No. 4 Oklahoma in Week 3.

What’s most impressive is the fact that four of the five non-conference games featuring two ranked teams involved SEC programs that went on to win: No. 5 Auburn beat No. 20 K-State, No. 13 LSU beat No. 14 Wisconsin and No. 12 Georgia beat No. 16 Clemson.

The only such game without an SEC representative was No. 7 Michigan State at No. 3 Oregon.

The SEC still has a chance to capture the top spot with games remaining between Georgia and Georgia Tech, South Carolina and Clemson, Florida and Florida State and Kentucky and Louisville—all on Nov. 29.

The winner of the 2014 college football preseason, the Pac-12’s only early missteps came via No. 9 USC’s shocking loss to Boston College and Washington State’s loss to Rutgers.

Though there are plenty of reasons for Pac-12 supporters to celebrate, it’s worth noting that of the six, non-league, power-five wins only one came against a ranked opponent—No. 3 Oregon’s comeback win over No. 7 Michigan State.

The other five wins came against unranked Virginia, Texas, Michigan, Illinois and Northwestern.

The Pac-12’s opportunities to improve on its 6-2 mark and stay ahead of the SEC come down to a trio of dates with Notre Dame: Stanford travels to South Bend on Oct. 4, Arizona State hosts the Irish on Nov. 8 and USC closes out its regular season against Notre Dame at home on Nov. 29.

I understand the cleanness of using just schools that fill the future SEC/ACC requirement for this comparison, but it provides an inaccurate picture. When you also include the rest of D1 football, the picture of where the various conferences stand become a lot more clear.

This may not be the intent, but this article really just looks like a piece of rich boy propaganda.

“Rich boy propaganda” is a new one for me.

Look, the author writes the pieces from a certain angle, uses stats, and doesn’t interject much opinion.

Including the rest of college football would be a totally separate angle because lower FBS teams and FCS teams would have to be included. I don’t see the folly in writing a piece about with power conference did the best against other power conferences through the first month of the season.

I agree that there is no real problem in it. But the idea of P5>G5>FCS is a narrative formed by powerful media outlets that interesting smaller media outlets such as this site has fallen in line with to a certain extent. Like I said, I don’t think Amy intended it as “rich boy propaganda” but you can see why I interpreted it that way.

So what you’re saying is the BIG 10 and SEC won the same number of games against other “Big 5 Conferences”.

Sounds like the SEC has been eating too many cupcakes this September!

Yes, right now. The Big Ten front loads all of their non-conference games, whereas the SEC spreads them throughout the season. SEC-ACC matchups still to be played include Georgia-Georgia Tech, Florida-FSU, Clemson-South Carolina, Louisville-Kentucky, etc.

Stop the press!!! The Pac-12 has played a single ranked opponent this year outside conference!!!

Or are Pac-12 fans still celebrating Washington’s 1-point win over Hawaii or the crushing blow that USC delivered to Boston College – oh wait….

I expect this post to get deleted, but will see…

Generalizing the the first four games of the season across ‘Power 5’ conferences and referring it to as the “pre-season” is plainly irrational.

For example, in this so-called ‘pre-season’ compare the FBS opponents…

Some programs had two byes whereas others had zero byes.

(Almost all FBS programs play one FCS program during the season, so until that changes, let’s leave those games out of any analysis).

The point is a much larger sample size is needed to even begin to make any useful or informative comparison across conferences. This fluff article was not even close to comparing apples to oranges, More like comparing Pluto to Earth.

Like the many similar recent articles showing on this site, this article provided offer no substantive analysis or unique perspective and appear to be just trolling the readers. Such posts are authored with only two purposes, to create controversy to gain comments and to gain/maintain positioning in search results. Good sports journalism? Not even close. Better this site stick to future schedules. Or are these fluff pieces really what Kelly, the site publisher, wants fbschedules.com known for?

The article only compared games against other power five opponents, not those others as you listed.

This article is not:

This is a football schedule website that otherwise would not have much going on. These articles are researched and written to provide users something else to look at in addition to schedules which don’t change much.

And there is nobody here named “Kelly.”

Apologies for misspelling your last name Kevin. However I stand by my other comments. As for including FCS programs in the “analysis” I was referring to my example listing. I appreciate your attempt at giving ‘something else’ for your readers to read, but as a member of the FWAA you should be able to do better, or at least motivate your new sidekick (interns?) reporters do better. As far as research, leading to insightful analysis I just don’t see it. Hope this was short enough. Good luck.

Being a member of the FWAA doesn’t classify one as an award-winning writer. Read their “about us” or wiki entry to learn more about what their goal is.

There are no interns here, only people who like to write about sports and make a little money also. I myself am not a great analytical writer, so look around and you’ll notice I mainly do the schedule and press releases.

In the future if you have any more personal issues with me or a writer, please use the contact form or send them an email directly. Thanks.

A comparison of performance (and SOS) in non-conference games needs re-examined when the full slate of OOC games are completed.

Some other SEC matchups still to be played:

But it is unclear if the non-conference schedules for Vanderbilt (Temple, Mass, Old Dominion, Charleston Southern) and Missouri (Indiana, UCF, Toledo, So Dakota St) will provide the same benefit.

And the Florida-Idaho game was cancelled. Florida benefits by that game not counting towards its SOS. Only if some other programs were so lucky.

A comparison of performance (and SOS) in non-conference games needs re-examined when the full slate of OOC games are completed.

The article was about the “preseason,” i.e. the first 4 weeks of the season where most games are non-conference. It stands on its own and doesn’t have to be re-examined at the end of the season if the writer chooses not to. Why? Because at that time there are plenty of computer indexes that decipher the season’s date and presents a good interpretation of the season its entirety.

We should keep in mind the Baylor Bears remain 0-0 against P5.BCS OOC opponents this DECADE. P.T. Barnum would be proud of Art Briles.

I wonder if ND beating Michigan counts a one of the 11 losses.

However a useful analysis would include ALL non-conference losses.

Include Vandy losing to Temple and WF losing to Utah St and ULM, and both VT and NC losing to NC. And WSU losing to Nevada, and Colorado losing to Colo St. And Virginia and Texas losing to BYU. And Iowa St losing to No Dakota St (FCS).

This ‘pre-season’ analysis does not consider any of those games. Someone please tell the author a ‘pre-season’ does not exist in college football.

I don’t get that. ND isn’t in a conference but being treated like they are. How fair is it that the ACC, PAC 12, Big Ten gets penalized to losing to a Independent but don’t get credit for beating one. ND maybe a elite program, but they are not a part of a Power 5 Conference.
If they include one independent then you have to include all of them. Otherwise it showing favoritism towards other Conferences that don’t play the Independents.