Which new CFB Power head coach has the toughest opening game in 2018? 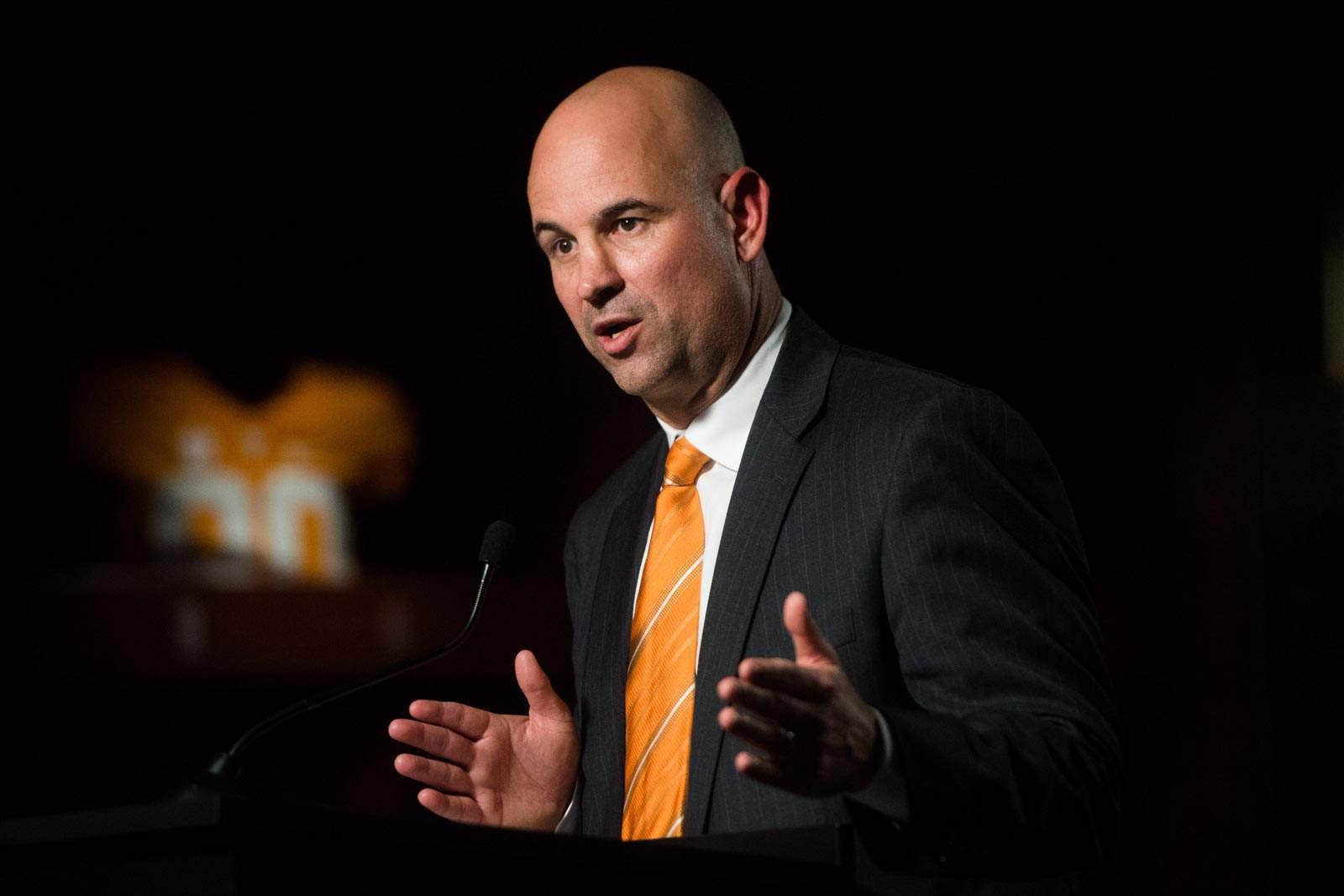 Of the 21 FBS head coaching changes coming into the 2018 season, 13 are at a Power Five school.

Which of these new leaders will get their coaching era off to the best start? Which will be challenged in Week 1? And finally, who will have an opponent so difficult it may make fans question their school’s decision to hire the new guy?

Jimbo Fisher, who comes to College Station after eight seasons at Florida State, gets the easiest opener of any of the new Power head coaches. The Aggies are set to kickoff against Northwestern State, a squad that finished 2017 at 4-7.

Fisher is 9-0 vs. FCS opponents as a head coach. He hasn’t opened against an FCS foe since he led FSU in back-to-back wins over Murray State and Savannah State to start the 2012 season. Texas A&M hasn’t lost to a team considered a “non-major” since falling 18-7 to the football team from the Naval Air Station at Corpus Christi, Texas in 1942. It hasn’t played an FCS opponent to start a season since 2007 when it beat Montana State 38-7.

Joe Moorhead takes over at Mississippi State after spending the past two seasons as the offensive coordinator at Penn State. Prior to that he led his alma mater, Fordham, to a 38-13 mark from 2012-15.

Moorhead will make his debut as the head coach at the FBS level vs. Stephen F. Austin, which finished 4-7 last year. Mississippi State also opened last season against an FCS opponent, beating Charleston Southern 49-0. The Bulldogs haven’t dropped a game against an FCS school since falling 9-7 to Maine in 2004.

Dan Mullen’s 69-46 mark in nine seasons at Mississippi State was enough to earn him the head job at Florida. He’ll get things started by hosting Charleston Southern, a squad that finished last season at 6-5. Ironically, it’s the same opponent he faced to open the 2017 season, a game the Bulldogs won 49-0. Mullen is 9-0 as a head coach against FCS foes.

The matchup marks Florida’s first action vs. an FCS team since 2014. The Gators fell to such an opponent the season before, in 2013, losing 26-20 to Georgia Southern, then a member of the Southern Conference. They haven’t started a season against an FCS team since 2009.

This is Arkansas’ second-straight opener against an FCS foe after beating Florida A&M 49-7 last year. The Razorbacks haven’t lost to a “non-major” since falling 10-3 to The Citadel in 1992, also a season-opening game.

Mario Cristobal was the head coach at FIU from 2007-12, amassing a 27-47 record in six seasons. From there, he served as the offensive line coach at Alabama (2013-16) before landing at Oregon as the co-offensive coordinator in 2017. He’ll get back in the head game against Bowling Green, which sputtered to a 2-10 finish last season, its worst mark in seven years.

This is Oregon’s first-ever game vs. a current member of the MAC. Bowling Green is 0-2 all-time against the Pac- 12, falling to Arizona in 1987 and Washington in 1986.

One of the more interesting hires coming into 2018, Herm Edwards hasn’t held a coaching job in nine years, last serving as the head man of the NFL’s Kansas City Chiefs from 2006-08. Though he also held the head job at the New York Jets (2001-05), he’s never been a college head coach. His only collegiate experience came as the defensive backs coach at San Jose State from 1987-89.

Edwards’ opener hosting UTSA marks the back-end of a home-and-home series that started in 2016 with a 32-28 Sun Devil win in San Antonio. The Roadrunners are 0-4 all-time vs. the current membership of the Pac-12.

Scott Frost returns to his alma mater after posting a 19-7 record in two seasons as the head coach at UCF, including engineering a perfect 13-0 run and a No. 6 finish in the final AP in 2017. He begins the next step in his coaching career with a game against Akron, a team that went 7-7 last season and earned a spot in the MAC Championship Game.

It’s Frost’s first-ever action as a head coach against a MAC member. Nebraska is 1-0 all-time vs. Akron (a 59-14 win in the season opener in 1997) and 5-1 against the current membership of the MAC. The only loss came last season, a 21-17 defeat to Northern Illinois.

Chip Kelly rejoins the college ranks after two stints as an NFL head coach, leading the Philadelphia Eagles (2013-15) and the San Francisco 49ers (2016). He got to the pros after earning a 46-7 mark at Oregon from 2009-12. Kelly will open against Cincinnati, a team that is fresh off back-to-back 4-8 campaigns, most recently under first-year head coach Luke Fickell.

The Bruins have never met the Bearcats on the gridiron and are a surprising 7-8 all-time vs. the current membership of the American. The most recent action came last season when they traveled to Memphis and got nipped by the Tigers 48-45 in a barnburner.

Kevin Sumlin didn’t take the head coaching job at Arizona until mid-January, almost two months after being fired by Texas A&M. He went 51-26 over six seasons in College Station, including a 25-23 mark in SEC play. Sumlin will get started in Tucson with a visit from BYU, a team that went 4-9 in 2017, its worst mark since 2003. He has never faced the Cougars as a head coach.

Matt Luke is one of only four new Power head coaches who will kick off the season against a Power opponent. He came to Ole Miss as an offensive coordinator in 2012, a post he held until the 2017 season when he was named the interim head coach after Hugh Freeze stepped down. Luke played center at Ole Miss from 1995-98. This is first head coaching role at any level.

Luke and the Rebels open with a neutral game against Texas Tech, a team that finished 6-7 last season. Ole Miss is 3-2 all-time vs. the Red Raiders, winning the last meeting, in the 2008-09 Cotton Bowl, 47-34. This is only the third regular-season game between the two schools.

Willie Taggart has slowly climbed the rungs of the coaching ladder with mixed results. He led his alma mater Western Kentucky to a 16-20 mark from 2010-12 earning him the same role at USF, where he went 24-25 from 2013-16. That was enough to propel him to Oregon, where he led the Ducks to a 7-5 finish last season. He took the Florida State job in early December of last year.

Taggart is one of only three new head coaches in the Power leagues to open against a team that ESPN has ranked in its Way-Too-Early Top 25 for 2018 and the only one to kick off with a conference game. Virginia Tech comes in at No. 14 after posting a 9-4 record in 2017. Taggart is 2-15 as a head coach vs. ranked teams and has never faced the Hokies. Florida State is 23-12-1 all-time vs. Virginia Tech, but the two have split the last four.

Jeremy Pruitt comes to Tennessee after three stints as the defensive coordinator at big-time programs – Florida State (2013), Georgia (2014-15), and Alabama (2016-17). He’ll have his hands full in the opener with high-scoring West Virginia, who ESPN has at No. 10 in its early sweepstakes.

This is Pruitt’s first go as a head coach. Tennessee and West Virginia have never met in football. The Volunteers are 9-8 vs. the current membership of the Big 12. The Mountaineers are 25-25-2 against the SEC.

The new head coach with the biggest challenge on opening day is Oregon State’s Jonathan Smith. Not only is top-ranked Ohio State his first-ever game as a head coach, he’ll be leading a program that went 1-11 last season and hasn’t posted a winning record since 2013. He’s also the only new Power coach who opens with a true road game. Smith comes to Corvallis after four seasons as the offensive coordinator at Washington. He played quarterback at Oregon State from 1998-2001.

Ohio State is No. 3 in ESPN’s early rankings. The Beavers and Buckeyes haven’t met since the 1984 regular season, a 22-14 win for Ohio State.

That Arkansas-The Citadel game in 1992 is the one that famously got Jack Crowe fired on the spot.

SEC & Pac-12 just cleaned house with coaches, did not realize how many had left.