Which conferences will meet most often during the 2017 regular season? 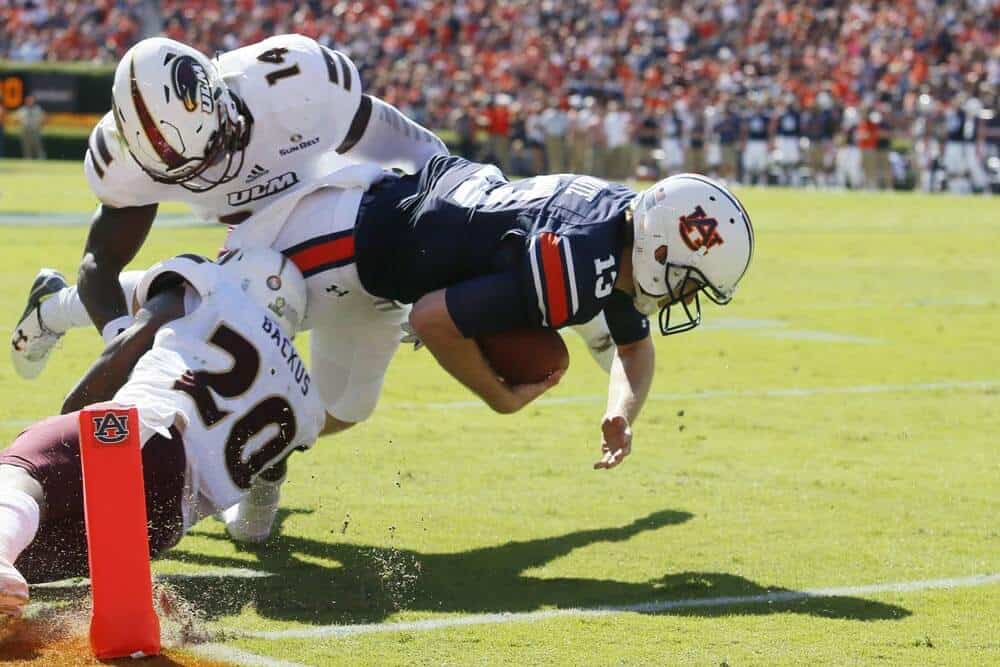 Whether it’s geographic convenience, history or a long-standing rivalry – conferences tend to have favorites when scheduling non-league opponents.

Following are the seven most-frequent matchups between FBS conferences in 2017. Of these, the SEC and C-USA are both listed three times, meaning their scheduling efforts are the most concentrated.

The only conference not mentioned is the Big 12, with only 10 members playing three non-league games each it had lower totals across the board.

The only matchup you won’t see at all in the 2017 regular season is a Conference USA team playing a Mountain West member.

American Athletic vs. C-USA: Cincinnati vs. Marshall, Houston at UTSA, Houston vs. Rice, Navy at FAU, SMU vs. North Texas, Tulane at FIU, and UCF vs. FIU

Of the seven American Athletic-CUSA matchups only one has significant history – SMU and North Texas – playing 36 times since first meeting in 1922. The two have met five times since 2006 and consecutively since 2014. The Mustangs lead the all-time series 30-5-1, but the Mean Green have won two of the last five.

The only first-ever matchup is Tulane and FIU.

Marshall gets its two MAC opponents early in 2017, hosting Miami (Ohio) in the opener and then Kent State in Week 3. Both are long-standing series. The Thundering Herd have played the Redhawks 43 times since 1905. They’ve won eight of the last nine, but are behind 12-30-1 in the all-time series. They’ve hooked up with the Golden Flashes 36 times since 1952, the series is tied at 18 wins apiece.

The SEC-CUSA matchup with the most history is Vandy-Middle Tennessee. The two schools have clashed 17 times since 1915. The Blue Raiders have only won three meetings – scoring consecutive wins in 2001, 2002 and 2005. This year’s game is in Murfreesboro, where it’s been played only twice previously, in 1920 and 2015.

The most frequent regular season non-conference combo involving two Power leagues, the ACC-SEC continues to thrive because of its four annual, in-state rivalry games. Beyond that, Clemson, Florida State and Georgia Tech each play an additional SEC opponent in 2017. From the other side of the aisle, South Carolina doubles up on ACC foes this season.

The oldest matchup in the bunch is Georgia Tech-Georgia which kicked off 124-years ago in 1893. The Bulldogs lead the all-time series 65-40-5 and the visiting team has won the last three. The two schools shared membership in the same conference (the Southern Intercollegiate Athletic Association/the Southern and the SEC) from the turn of the century until the early 1960s making the meetings from 1897-1963 all league games.

The matchup with the most history is Clemson-South Carolina which has been played 113 times since 1896. The Tigers lead the all-time series 67-42-4. Like Georgia Tech-Georgia, the two schools played as conference rivals from 1915-1970, when the Gamecocks left the ACC to become independent (they joined the SEC in 1992).

The Big Ten-MAC (like the Pac-12-Mountain West and SEC-Sun Belt below) is all about the Power conference in one geographic area hosting opponents from the nearby non-Power league. It’s the big brother-little brother and/or David vs. Goliath scenario.

It’s also one of only two frequent matchups (along with the SEC-Sun Belt) that will be exclusively be played at the Power school’s home field.

Of the nine, the combo with the most history is Michigan State-Western Michigan, a 14-game series that kicked off in 1908. The Spartans lead the all-time series 12-2, the Broncos haven’t scored a win since 98-years ago in 1919.

With a whopping 10 matchups, the Pac-12-Mountain West combo is tied with the SEC-Sun Belt for the most regular-season meetings in 2017. Unlike the other big school-little school combos, three of the Pac-12 members will travel to the MWC team’s home field.

The most storied series in the bunch is Colorado-Colorado State, first played in 1890. The Buffaloes lead all-time 65-22-3 and have won seven of the last ten. The longest-awaited reunion belongs to UCLA-Hawaii – which haven’t clashed since the 1939 Poi Bowl in Honolulu, a 32-7 win for the Bruins.

Of the 10 SEC-Sun Belt fixtures, six include either Arkansas, Auburn or Ole Miss – all doubling up on Sun Belt opponents in 2017. Overall, the SEC teams hold a 30-1 all-time advantage in the matchups. The only loss came in 1996 when UL Lafayette upset (25) Texas A&M in Lafayette, La.

The matchup with the most history is Auburn-ULM, the two schools meeting 10 times since 1994. The oldest is Missouri-Idaho, a two-game series which dates back to 1958.

First-ever meetings are Arkansas-Coastal Carolina (which moves up into the FBS ranks in 2017) and Ole Miss-South Alabama.

What about SEC & SoCon?

What about SEC vs. Southland?

Considering that the SEC only plays on team from the Southland Conference in 2017, it did not make the list. Sorry to disappoint you.

So the SEC is playing 25% of their non-conference games against FCS schools? I know someone will share, but could I ask what percentage the other P5 schools are each playing FCS schools in 2017? Thank you.

??? Umm… CUSA and Sun Belt are both FBS conferences.

I really wish I knew the answer to that Billy. Unfortunately, I don’t.

ULM beat Alabama in 2007, so the Sun Belt has at least two wins against the SEC

People still salty about SEC playing FCS. Well remember when App St (then FCS) beat Michigan? Yes I agree I would rather watch more SEC matchups against FBS opponents. Not every conference has 12 teams where only 4 teams (Big 12) relevant enough to talk about. Ohio St, Michigan, Nebraska, and MSU. Everybody else are easy wins.

Leonard, You share a game from 2007 for your reference point? Come on. My question I posted last week was 25% of SEC non-conference games are against FCS school, what percentage of non-conference games are other P5 schools playing against FSC schools? It’s a simple question and not one to knock on the SEC unless you are choosing to do so. As well, where do you come off saying only Ohio St., Michigan, Nebraska, and MSU are tough games whereas “everybody else are easy wins.”? I don’t think Wisconsin, Penn State, Iowa or even Minnesota or Northwestern would like to hear that. If the Big 10 is only 4 deep, how deep do you think the SEC is?