What if the 2021 Sweet Sixteen was played by football teams? 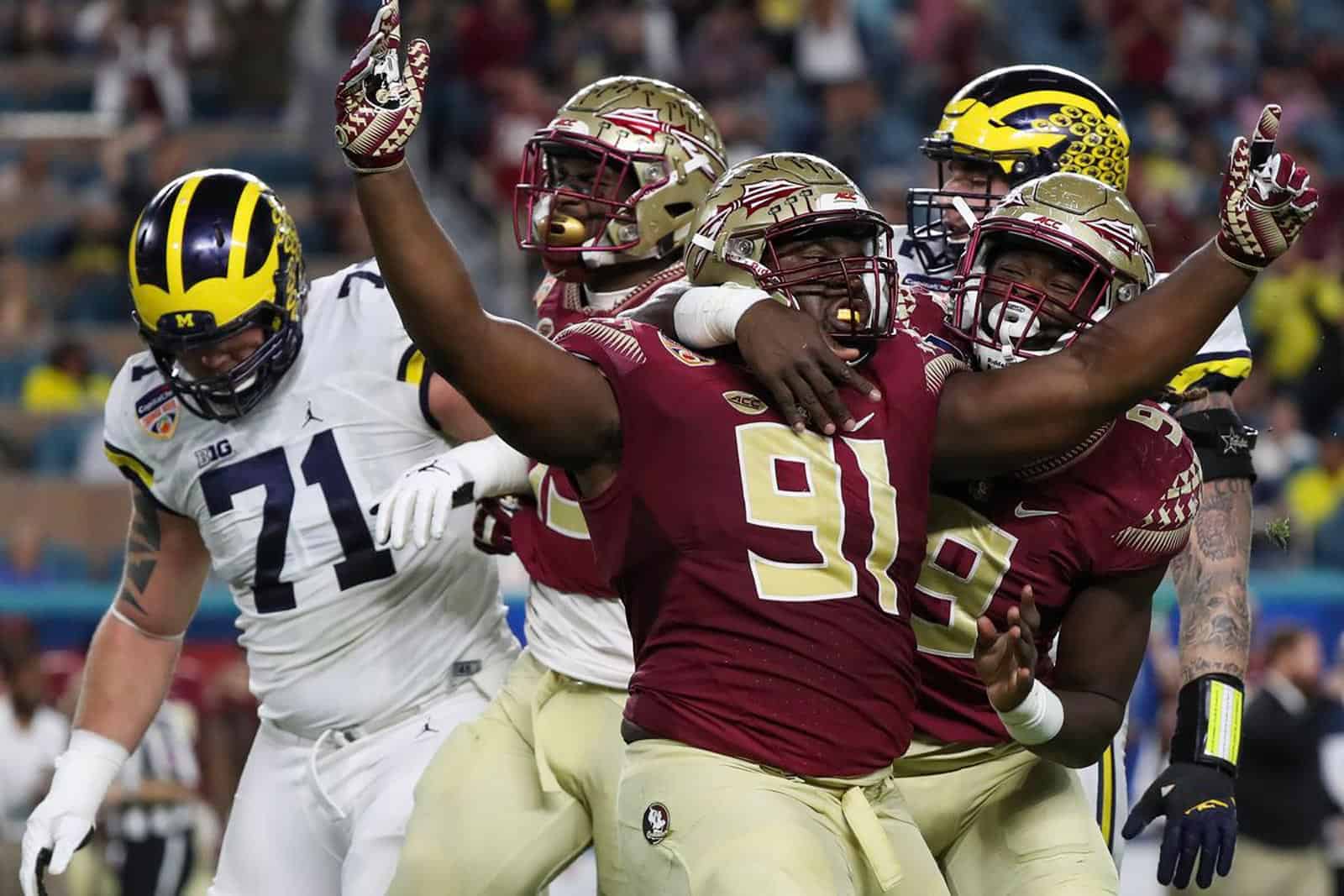 While there has been much ado about expanding the CFP bracket to include more teams, what if the NCAA Men’s Basketball Tournament magically morphed into a football affair?

Indeed, what if, when the bracket was down to 16 teams, each school’s football counterpart leaped in and played out the remainder of the basketball tournament not on a court but instead on the gridiron?

These two have met four times previously in football but not since 1957. Villanova played as a football independent from 1894-1980, which covers each of its football meetings with Baylor. The Wildcats are currently members of the Colonial Athletic Association, the league they represented when they went 14-1 and captured the 2009 FCS National Championship with a 23-21 win over Montana.

Despite their campuses being located a mere two hours apart in neighboring states, the Razorbacks and Golden Eagles have never met in football. That’s because Oral Roberts, which was founded in 1963 in Tulsa, Oklahoma, has never fielded a football team.

Like Arkansas-Oral Roberts, the Ramblers and Beavers have never met previously on the gridiron. But where the Golden Eagles have never fielded a football team, Loyola Chicago participated in the sport from 1892-1930. Loyola – which was originally called St. Ignatius College – disbanded its program because the administration felt that “collegiate football was becoming too centered on celebrity and entertainment and not enough on the amateur nature of the students.”

Loyola Chicago fields 15 Division 1 sports in the Missouri Valley Conference. Besides capturing the 1963 NCAA men’s basketball title, the Ramblers also won back-to-back national championships in men’s volleyball in 2014 and 2015. While they haven’t had a varsity football team in 91 years, they did win the 1971 club football national championship.

The Orange and Cougars, one of only four FBS matchups in this year’s Sweet Sixteen, have met twice in football. The most recent action came in the 1996 Liberty Bowl, a 30-17 win for Syracuse. The Orange – led by sophomore QB Donovan McNabb – finished that season 9-3 and ranked No. 21 in the AP.

The first meeting came in the 1970 season opener in Houston, a 42-15 win for a Cougar team that was ranked No. 15 in the preseason AP and had RB Robert Newhouse on the roster. Both teams were independents at game time, U of H didn’t sign on with the Southwest Conference until 1976 and Syracuse didn’t ink a deal with the Big East until 1991.

The only Sweet Sixteen pairing not to feature an FBS school, Gonzaga and Creighton – who have never met on the gridiron – both shut down their football operations at the beginning of World War II and never resumed play. The Zags fielded a team from 1892-1941, highlighted by a 5-3 campaign in 1922 which ended with the programs’ only bowl appearance – a 21-13 loss to undefeated West Virginia in the San Diego East-West Christmas Classic.

The first of three juicy Power 5 matchups in the Sweet Sixteen, USC-Oregon is the only in-conference game in the bunch. The Trojans and Ducks have met 62 times in football since first kicking off the series in 1915. The most recent action came in last season’s Pac-12 title game when unranked Oregon traveled to (13) USC and scored a 31-24 win. The series also includes an international meeting, the 1985 Mirage Bowl (later referred to as the “Coca-Cola Classic”), in Tokyo, Japan, a 20-6 win for the Trojans. A neutrally sited late regular season booking as opposed to a postseason game the Mirage Bowl was played annually from 1977-93.

USC leads the all-time series 38-22-2 but Oregon has won two-straight and four of the last five. The two aren’t scheduled to meet again during the regular season until 2023.

A rematch of the 2016 Orange Bowl (a 33-32 win for Florida State), these two powerhouses have clashed three times in football. The first meeting came 35-years ago during the 1986 regular season in Ann Arbor, a narrow 20-18 win for then (5) Michigan – led by senior QB Jim Harbaugh – over a Florida State squad ranked No. 20. The game also marked the only time that Bo Schembechler and Bobby Bowden met as head coaches.

Next up was another regular season meeting in Ann Arbor, this time in 1991, when then (1) Florida State destroyed (3) Michigan 51-31. For the Seminoles it was the fourth victory in a ten-win streak that ended with a thud via a 14-9 loss in the regular-season finale at (5) Florida. For the Wolverines, it was the only regular-season loss in 1991. After edging (9) Texas A&M in the Cotton Bowl, FSU finished No. 4 in the final AP while Michigan landed at No. 6 after falling to (2) Washington in the Rose Bowl.

Like Michigan-Florida State, the Bruins and Crimson Tide have also clashed three times in football, once during the postseason and then twice during the regular season. The first meeting dates to the 1976 Liberty Bowl, a 36-9 win for (16) Alabama – led by head coach Bear Bryant – over (7) UCLA. The Bruins only other missteps that season were a 10-10 tie at (8) Ohio State and a 24-14 loss vs. (3) USC in the finale.

The most recent meetings came via a home-and-home series in 2000/01, both games were played as the season opener for both squads. The front end was a shocking 35-24 win for an unranked UCLA team playing host to an Alabama program ranked No. 3 in the preseason AP. The Tide went on to finish 3-8, which remains the worst outcome for the program since 1957, a 2-7-1 mark the season before Bear Bryant took over the reins.

The 2001 contest was played in Tuscaloosa, a narrow 20-17 win by (17) UCLA over (25) Alabama in what was the first year of the two-year Dennis Franchione era. The Tide improved to 7-5 that season, still five years from the Nick Saban football revival show coming to town.

Oh the dream of a 16 team football D1 tournament with 10 conference champs and six at large teams. Then Amy could write an article about how they do if the Basketball teams played instead.

Before I read the column the answer: ALABAMA!

The real story here is that the NCAA forms an ‘elite’ selection committee whose purpose is supposed to be to avoid an outcome of 9 of the ‘sweet sixteen’ teams (the outcome we got) from being within that number. Let’s remember this i early December, when we are all told that the college football selection committee ‘got it right.”