What if non-Power opponents counted as less than a full win? 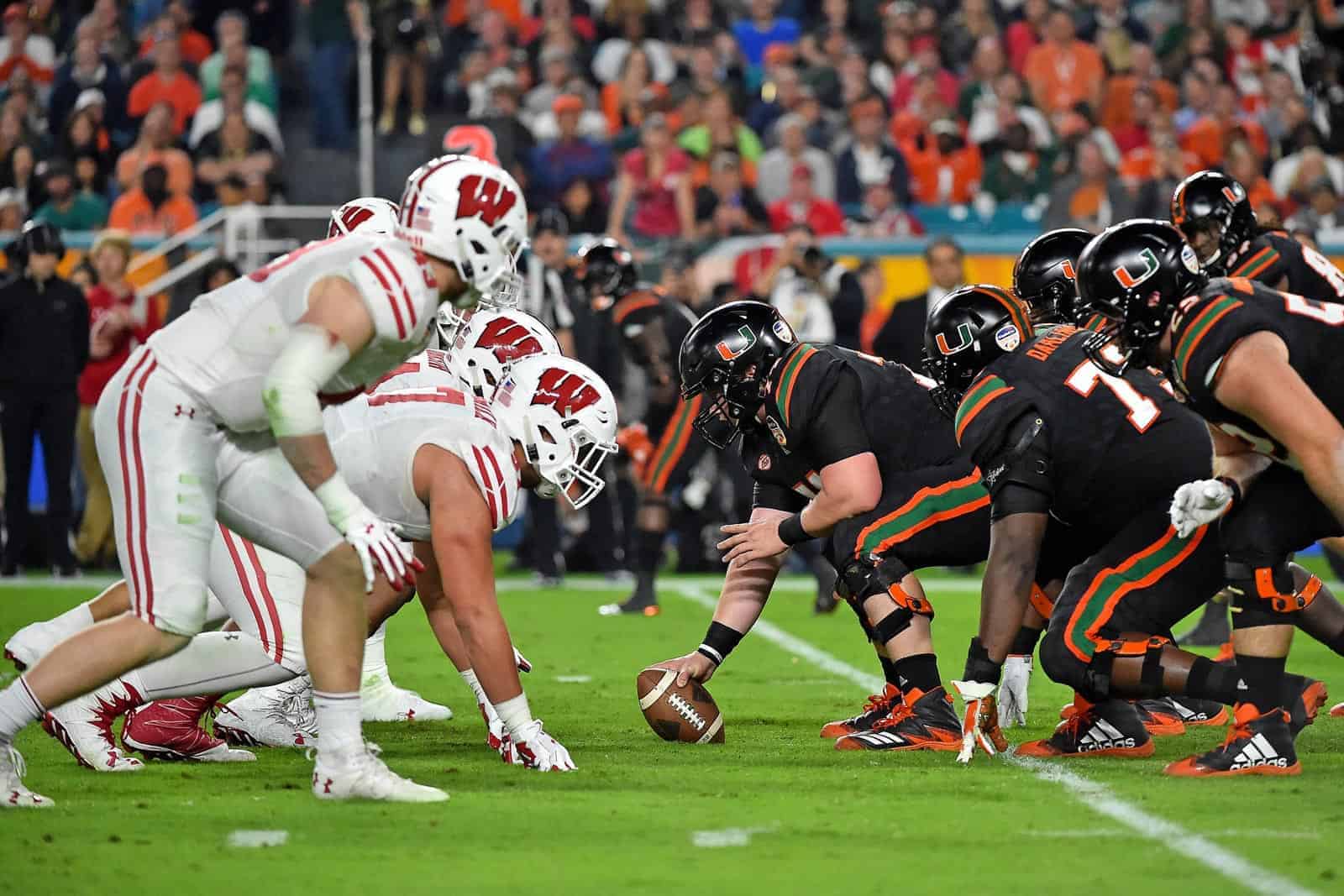 One of the core issues with scheduling is that there aren’t any real and/or consistently applied consequences. It’s true whether a program attempts, year in and year out, to book the best set of opponents it can, or, on the other hand, for those who try to get away with meeting the bare minimum requirements.

From a national perspective, this is further complicated by conferences each having their own scheduling dictates.

It means that when the College Football Playoff committee reviews potential resumes in December, it’s never going to be an apples-to-apples comparison. This gives it the flexibility to pick who is most “desirable” rather than the most “deserving.”

What if programs were unilaterally rewarded, or penalized, by reflecting scheduling choices in the win/loss column?

Let’s say, perhaps, that programs are awarded ¾ of a win for a victory over a non-Power FBS foe (a Group of 5 member) and ½ of a win for an FCS opponent.

Could it transform the way teams approach scheduling?

Let’s apply this “adjusted” approach to the Top 10 teams in the final CFP poll from last season and see what happens. These were the rankings that came out just after the conference championship games – they seeded the bracket and decided which teams would, and wouldn’t compete, for a national title.

Clemson beat ten Power opponents in 2018, finishing the regular-season with a win over (2) Miami Fla. in the ACC championship. Its non-Power wins came over Kent State (3/4 of a full win) and FCS Citadel (1/2 of a full win).

Oklahoma also beat ten Power opponents in 2018, including knocking off (10) TCU in the Big 12 title game. Its Group of 5 wins came over UTEP and Tulane. The lack of an FCS foe gave the Sooners a .25-win advantage over Clemson and Georgia.

Like Clemson and Oklahoma, Georgia beat ten Power foes last season. What cost the Bulldogs vs. Oklahoma was a win over FCS Samford. Their Group of 5 win was over Appalachian State.

What hurt Alabama is that it only beat eight Power opponents vs. Clemson, Oklahoma and Georgia’s ten. This is completely due to the Crimson Tide’s scheduling blueprint: eight SEC games and a four-game non-conference slate that includes one Power opponent, two Group of 5 teams and an FCS foe.

Comparatively, the Sooners benefited from the Big 12’s nine-conference game format. Though the ACC and SEC both use an eight-league game scheme, Clemson (Auburn and South Carolina) and Georgia (Notre Dame and Georgia Tech) both booked two Power foes out of conference.

Despite playing a nine-game conference schedule and winning the Big Ten championship game over (5) Wisconsin, Ohio State only won nine games over Power opponents in 2018. The difference for the Buckeyes were losses to (5) Oklahoma and the beatdown at unranked Iowa.

Adjusting Wisconsin’s record is complicated by its win over BYU, an independent that’s not unilaterally considered a Power program like Notre Dame. Since the Big Ten counts the Cougars as a Power opponent, the Badgers technically beat ten Power programs last season.

Add in ¾ wins from wins over Utah State and FAU and Wisconsin earns 11.5 victories.

Despite falling at (16) Washington State and at (13) Notre Dame, USC still managed ten wins over Power opponents last season. That’s because 11 of the 12 Trojan’s regular-season opponents hailed from Power 5 conferences and they beat (20) Stanford in the Pac-12 title game.

The only non-Power program USC played in 2018 was its opener vs. Western Michigan.

Like Penn State, the Hurricanes beat eight Power programs. The difference is, they played an FCS foe (Bethune-Cookman) to go along with its win over Toledo. What further cost Miami was the cancelled game vs. Arkansas State due to Hurricane Irma. A win in that game would have bumped its win/loss total to 10-2.

If this approach was adopted – clearly a long, long shot – Power programs would be highly motivated to reschedule cancelled dates. If not, teams suffering weather-related cancellations like Miami did in 2017 should have a way to earn the win back.

Here’s what the rankings would look like based solely on the adjusted win/loss totals.

T1. Oklahoma and Wisconsin (previously 2 and 6)

The biggest loser is Alabama, who it would be hard to justify making the playoff using this approach. Had the Tide not lost to Auburn, thereby picking up another full win, and ascended to the SEC title game, where another win was available, they would have finished at the top. They also would have benefited by following suit with Clemson and Georgia who both scheduled an additional Power opponent in the regular season (and were duly rewarded by the adjusted win/loss scheme).

The biggest winner is Wisconsin, which benefited from the Big Ten’s format of nine-league games and picks up a questionable full win over BYU. If conference championships were fully honored as advertised by the CFP committee, you could make the case for USC leapfrogging the Badgers.

That would result in the champions of the Big 12, the ACC, the SEC and the Pac-12 making the Playoff. Ohio State’s two losses to Power opponents – combined with it playing just one Power foe in non-conference play vs. USC’s two – would cost it a slot.

The other question would be whether to apply the same logic to losses to non-Power programs. If it worked both ways, which in an ideal world it would, suffering a defeat to a Group of 5 member would count as 1.25 losses and those rare cases where a Power team fell to an FCS opponent would count as 1.5 losses.

Utilizing this approach would also mean that Group of 5 members would lose the opportunity to ever make the bracket. Though unfortunate, it would highlight the need to have the non-Power conferences break off and form their own division where 100% of the teams competing had a legitimate path to a national title.

In 2017, UCF, which came it at No. 12 in the final CFP rankings, would have its 12-0 regular-season finish amended to a 9-0 mark. The Knights beat ten Group of 5 opponents (including beating No. 17 Memphis in the American conference championship game), a single Power 5 foe (Maryland) and an FCS school (Austin Peay).

Though the Knights won all 12 of their games, it can’t be argued that their slate was the same caliber of any Power league member. Though this could be considered an insult to UCF and its achievement, instead it illustrates the need for change that would eliminate the possibility of it happening again.

Overall, the approach would make great strides in leveling the playing field in scheduling. The more Power opponents you choose to schedule, the more-full wins that can be earned.

It changes the discussion about what to do about FCS opponents, teams that choose not to schedule Power teams out of conference play and how to reward programs who double-up on tough non-league foes.

It also may change the minds of the brass at the ACC and SEC, who have stuck with an eight-league game format vs. the Big 12, Big Ten and Pac-12’s nine-game blueprint. In this scheme, the ACC and SEC would suddenly be at a one-game disadvantage.

Ultimately, though it’s got plenty of flaws and it’s unrealistic to think it would be adopted, it’s a concrete, palpable reward for programs who choose to schedule the best set of opponents they can. On the other hand, it’s a harsh consequence for those teams who schedule at, or below, the bare minimum.

I could never quite figure out how points to give the losing team (losing a hard fought game to Oklahoma is still better than beating a mediocre MAC team. In real life it matters if you win by 30 points or win by 3 and some games won by 10 points are really close and some are not close at all. Last is a Neutral site big win worth 9.5 points? Winning on the road is more impressive, winning at home is a little less impressive. Conference games vs non conference games, how should that figure into it?

Maybe can take this germ of an idea and move it forward.

In review of the current article I think it does not go far enough. Beating Ohio St at home is not reward more than beating Kansas for Oklahoma and it should, Beating a FCS team should not be more valuable than losing to Oklahoma and in this case it. The only thing worse is that all wins count as one point no matter the score or who you play, especially when you pick who play for 1/3 or 1/4 of your season.