What if the 2017 Sweet Sixteen games were football matchups? 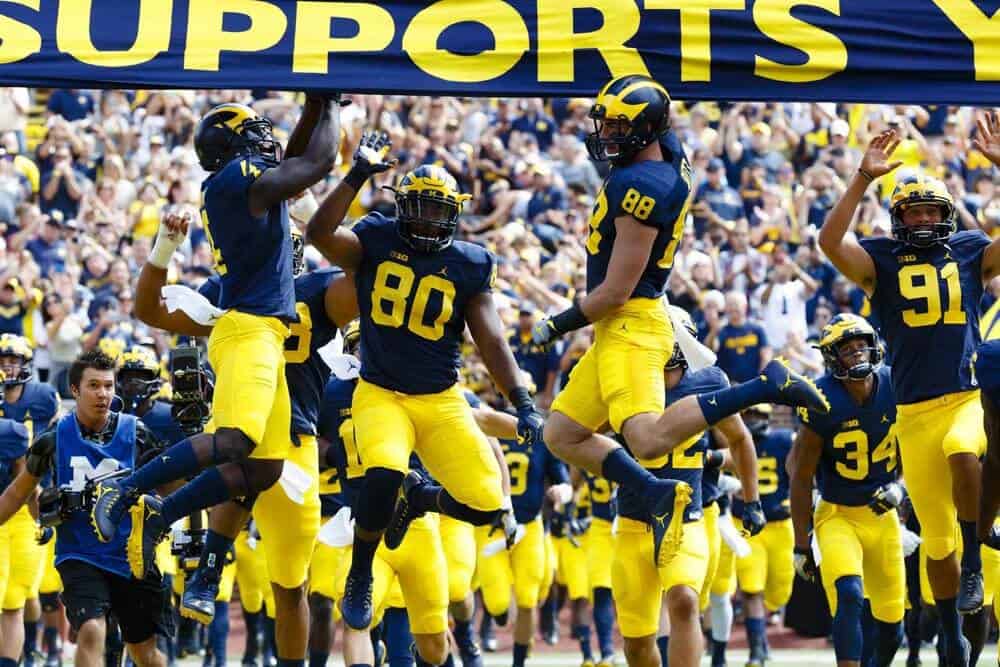 What if, for one round only, basketball squads took the night off and subbed in their football team to play for an opportunity to advance to the Elite 8?

Following are the next eight games in this year’s NCAA Men’s bracket – ranked not by how attractive they are on the court, but on the gridiron.

The rankings provided are from ESPN’s Post-signing day Way-Too-Early 2017 Top 25.

It should come as no surprise that Arizona and Xavier have never squared off in football as the Musketeers disbanded their program in 1973.

Ironically, Xavier’s biggest moment on the gridiron came at the expense of Arizona’s in-state rival, Arizona State. The Sun Devils lost 33-21 to the Musketeers in the 1950 Salad Bowl (in Phoenix). The victory capped off a 10-1 season for Xavier, the best in program history.

Gonzaga’s football program took a break for WWII in 1941 and never returned to the field. The final game in program history was a 59-0 loss to Washington State in Spokane on Nov. 22, just days before the Dec. 7th attack on Pearl Harbor.

Two decades before the war made Gonzaga a basketball school, the Mountaineers and Zags clashed on the gridiron – in the postseason no less – in 1922. The game was the San Diego E-W Christmas Classic, a contest West Virginia won 21-13.

The ’22 Zags finished 5-3, including a 77-0 win over Wyoming, it was enough to earn them their only bowl appearance in program history. As for the Mountaineers, they went 10-0-1 that season, the only misstep a 12-12 tie vs. Washington & Lee in Charleston. It marked the first double-digit win season in program history, the next would be 47-years later in 1969.

The only pairing between active FBS and FCS football squads in the Sweet Sixteen, the Tar Heels and Bulldogs would be a first-ever matchup.

North Carolina dropped a game to an FCS team as recently as its 1999 loss to Furman. Butler hasn’t beaten an FBS team since shutting out Ball State (13-0) 54-years ago in 1963.

Kansas and Purdue have been fielding football teams since 1890 and 1887 respectively and in all that time they’ve never played one another.

Another potential first-ever football meeting between two big-time schools, UCLA and Kentucky have avoided playing each other for almost 100 years.

Kentucky has only played a Pac-12 member twice in program history. Both meetings were with Oregon State (1968 and 1976) and both resulted in wins for the Wildcats.

Baylor and South Carolina haven’t clashed on the gridiron since 1976, a narrow 18-17 win for the Bears in Waco. The Gamecocks only win came the year before, a 24-13 upset of then No. 18 Baylor in Columbia.

The only other meeting between the two was in the 1949 season opener in Waco, a game Baylor won 20-6. That Bear team put together a 6-0 run and were ranked No. 6 coming into a Nov. 5 showdown at Texas. After falling to the Longhorns and then Rice in the finale, Baylor finished 8-2. It was enough to earn them mention at No. 20 in the final AP, their first postseason ranking in program history.

Another potential football blockbuster, Oregon and Michigan have clashed five times in history, all in the regular season. The first game dates back to 1948 (a 14-0 Wolverine win) and the most recent was in 2007 (a 39-7 Duck victory). All but one game was played in Ann Arbor.

Two of the three seasons Michigan beat the Ducks it finished with an undefeated record. The first, in 1948 was a 9-0 finish that earned the Wolverines their first-ever No. 1 rank in the final AP poll. The next was a 10-0-1 mark in 1973. The only misstep that year was a 10-10 tie with (1) Ohio State in the finale. That Wolverine squad finished No. 4 in the final AP.

Though Wisconsin-Florida sounds like a rematch of a BCS bowl game, the two have never met in their long, storied football histories.

The Badgers have won the Big Ten six times since 1990 while the Gators have captured an SEC title seven times over the same time period. If they had played in different conferences, perhaps the ACC or Pac-12, the two would  have a meaningful shared history.

Sort of surprising at how many big team schools have not matched up…the Purdue-Kansas was the biggest shocker. Now days a lot of football schedules also include games in other sports as part of the deal.