What can UConn expect from football independence? 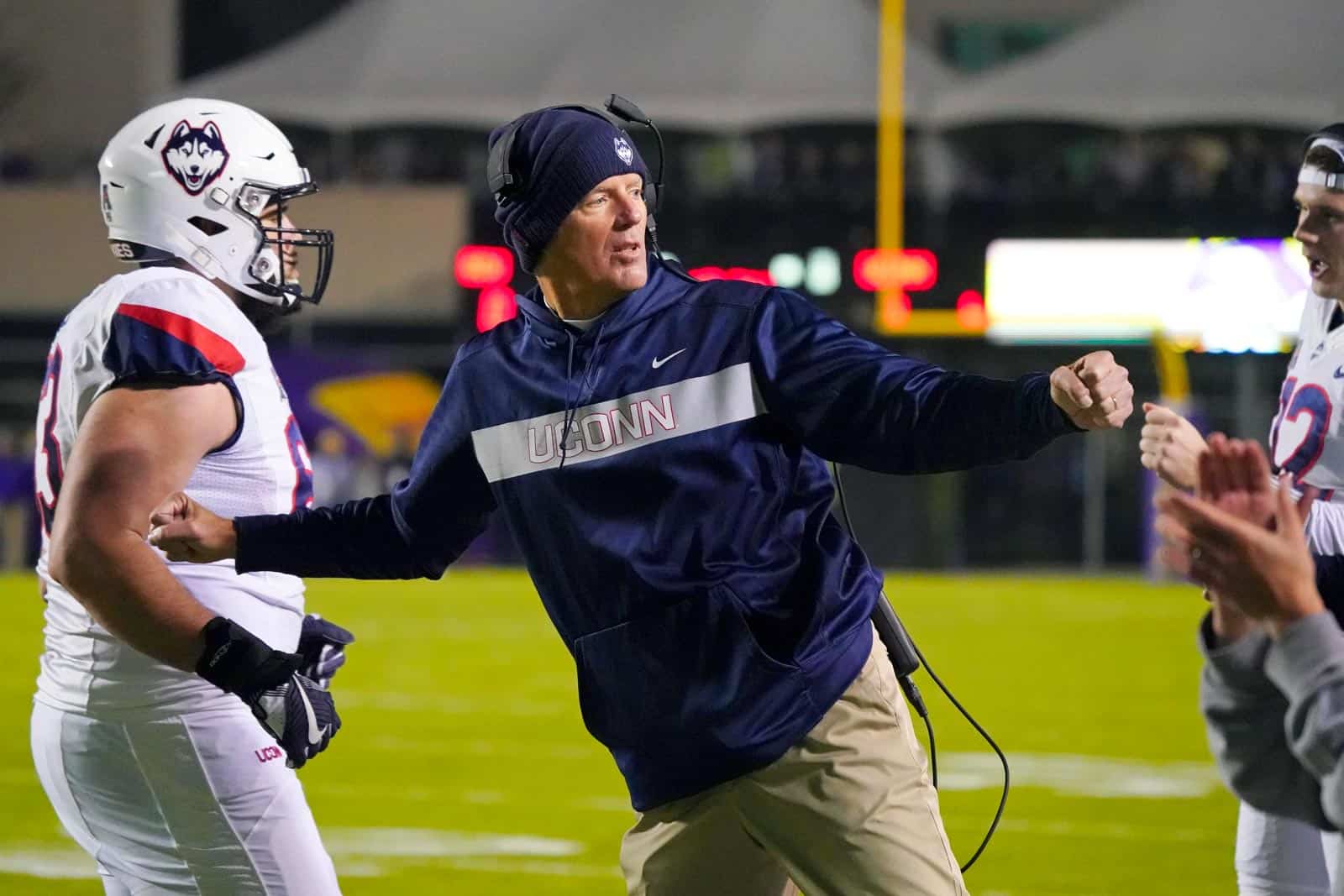 UConn’s departure from the American Athletic Conference to the gridiron-free Big East means a lot of things across its athletic programs, but for football it will result in it playing as an independent beginning in 2020.

The Huskies dabbled in independence as recently as 2000-03 when they transitioned from the FCS to the FBS, but other than that they’ve been members of a conference since they first began playing football in 1897.

While UConn will no longer be able to compete for a league title or enjoy the benefits of revenue sharing or bowl tie-ins associated with conference membership, it will gain complete control over its schedule.

As members of the American Athletic Conference, the Huskies played the required eight league games and therefore had just four openings to schedule freely. From 2020 onward they’ll have 12 opponents to book at their own discretion.

What will this mean for UConn from a performance standpoint? The Huskies have only won three total games over the last two seasons, posted a 20-65 record as AAC members (2013-19) and haven’t finished with a winning record since 2010 when they went 8-5.

Will an independent schedule allow them to improve – or – instead will it prolong the struggle even further?

Take a look at how independent status effected the last three FBS programs to go out on their own.

New Mexico State has only managed to post a winning record once since 2003. That came in 2017 – when it went 7-6 in its final season in the Sun Belt before going independent. If you throw that anomaly out, the Aggies haven’t gained or lost any momentum since leaving league membership behind.

The Minutemen moved up to the FBS in 2012 and spent its first four seasons as MAC members before going independent in 2016. The additional three wins they’ve managed since has a lot to do with the fact that they’ve played six total Power opponents over the last three seasons vs. the ten they faced from 2012-14, a list that included Michigan, Wisconsin, Kansas State and Penn State.

When comparing BYU’s performance, it’s key to keep in mind that FBS teams went from playing 11 to 12 regular-season contents beginning in 2006. So even though the Cougars won the same amount of games in each nine-year increment, they’ve picked up additional losses since going independent.

From a bigger picture perspective, BYU has lost ground since going out on its own, a fact that’s hidden in the long years on each side of the change. Included in the nine seasons leading up to independence is a 20-27 run from 2002-05 followed by a magnificent 43-9 mark from 2006-09.

BYU did manage a 10-3 mark in its first year of independence and it’s earned seven-plus wins every season since then apart from 2017 (4-9), but it hasn’t enjoyed near the national recognition.

The dip in performance is likely because the Cougars went from playing two Power opponents (in addition to their MWC schedule) from 2005-10 to playing four, five and even six such opponents consistently since 2011.

None of the trio of programs have enjoyed any significant gains, nor suffered any sizable losses in wins and losses since going conference-free. That said, BYU – the team of the three with the most upward trajectory – went from earning four consecutive AP Top 25 finishes from 2006-09 to not being mentioned in the final polling since.

Though we can’t accurately predict what will happen with UConn, recent history tells us that while independence won’t lead directly to an increase in wins, it won’t lead to a dramatic increase in losses either. It may though, like in the case of BYU, mean the Huskies lose the interest/attention of the Top 25 voters.

What’s also interesting about UConn as an independent is how it will be viewed by prospective opponents interested in boosting their own schedule strength.

The bottom line is, not all independent programs are perceived equally, and therefore each is considered a different type of potential scheduling target attracting its own unique set of dance partners.

First, there is Notre Dame which is unilaterally treated as a Power opponent despite it not being a full-time member of a Power 5 league (it is quasi-associated with the ACC). Next up is BYU, which vacillates between officially and unofficially, depending on what conference you call home, a Power foe. While this is confusing, Power teams generally don’t catch grief for having the Cougars count as their required Power 5 opponent outside of league play. This could and likely would all change if the said program was in the College Football Playoff conversation.

Next, there is Army, which shares “Power” status – almost weirdly – with UConn with the folks over at the Big Ten who subjectively came up with their own list.

That leaves Liberty (which just joined the FBS ranks in 2018), New Mexico State, and UMass – which are all considered Group of 5 opponents.

It’s logical to assume, that on this very fluid scale, UConn would fall a few notches below BYU and perhaps just above Army (which continues to deal, rightly or wrongly, with the legacy of only winning more than four games once from 1997-2015).

What it all amounts to is the Huskies being an attractive opponent for Power 5 members which means its schedule strength as an independent will be stronger than UMass’s. If UConn, like BYU, can obtain even unofficial “Power” status, even more Power teams could come calling.

While this would boost the Huskie’s own schedule strength and therefore make winning games (and returning to the land of .500) more difficult, on the plus side it would put them in a far better position in terms of negotiating TV revenues and bowl tie-ins. It amounts to an opportunity to regain some of what is naturally lost by not having a conference to partner with.

U Conn will have all their road games be the homecoming for the other school. They have about as much chance of success as an independent as Rutgers does of winning the Big 10 East

Never count anybody out. UConn was respectable for a few years in the old Big East. I have a feeling they will be respectable again.

Also I know that UConn can easily beat most ACC teams despite being rejected by the league on several occasions because outside of Clemson, the ACC was trash last year. Ohio State was still beat by Clemson despite playing a tougher schedule than them, and none of the other 13 ACC teams, including runner-up Virginia, deserved to represent the conference in the Orange Bowl. That spot should have gone to quasi-ACC school Notre Dame, who was kept out because they are not technically in ACC football and unlike the ACC’s minor bowls cannot represent the conference in the Orange Bowl. The ACC just didn’t deserve that Orange Bowl money last year.

Z-Man says:
“I know that UConn can easily beat most ACC teams”

UGONE beat Wagner 24-21 (who were @the worst team in the FBS – 1-11 & losing to a D2 (East Stroudsburg) and an FCS team in its first year (Long Island) and an AWFUL UMass team who broke UGone’s record set in 2018 for worst FBS defense ever.

ACC was not good outside Clemson but you are embarrassing yourself to think UGone ” can easily beat most ACC teams.
To not get blown out would be a victory.

So far UConn can not schedule well. They did get a few Home and Homes with Purdue, Maryland, Syracuse and Boston College, most of which are happy to be Bowl Eligible. They are also doing games with fellow independents Army and Liberty but really it is going to be tough to get football to one of the Big 5 Conferences.

They sure look Group of 5 in the future schedule and on the field results of the last few years.

I did not know the “Home Stadium” is a 28 minute drive on a good day from the College. That is a tough situation.

They can, and will, be respectable again if not better. If that happens then they very well might join the ACC.

UConn football is suffering from the Colavito effect. It is named after the fact that after the Cleveland Indians traded away star player Rocky Colavito, they went from being contenders to also-rans, and bringing him back did not reverse that trend.

The “Colavito” in question is coach Randy Edsall. After leading UConn to the Fiesta Bowl in 2010, he left for Maryland, and UConn hasn’t had a winning season since (the improvement to 6-7 in 2015 whilst losing a bowl turned out to be false hope), even after bringing Edsall back.

There have been exceptions to this rule. The Cleveland Cavaliers were contenders during LeBron James’ first tenure with the team, then after he left the first time, they became also-rans, but this was reversed when he rejoined the team for four more years including winning the NBA championship in 2016, but it happened again after he left for the Lakers in 2018.

But I digress. The point is things in sports are for the most part cyclical. UConn won’t be bad forever, and along those lines Clemson won’t be good forever. What UConn needs to do is hire a better coach than Edsall. I want Brian Kelly at UConn (based on his work at Cincinnati) but ND refuses to fire him or even realize they won’t win a national title with him as coach. Not even a 4-8 record in 2016 was enough to free him from ND’s control.

I understand Z-Man’s argument that 10 years ago UConn was a respectable football team, which might have been able to compete at the Power 5 level, but looking at the teams UConn is scheduling, and looking at their most recent results including their recruiting classes, the immediate future looks like a disaster. To say that the schedule will be a challenge is a huge understatement. I believe that absent a massive investment in the football program, UConn is being set up for failure, not success. However, we shall see, and I do wish UConn good luck.