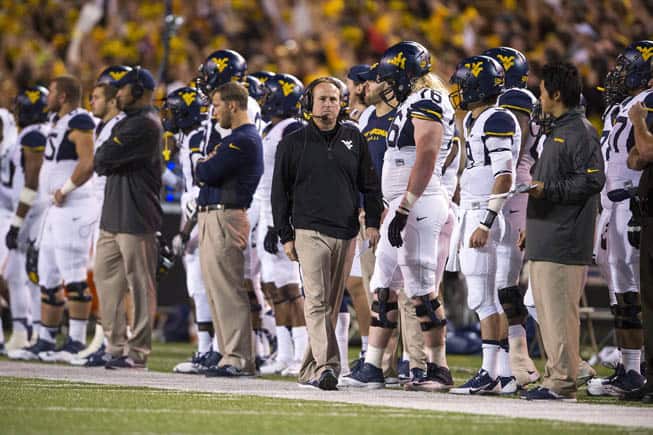 West Virginia athletics director Oliver Luck wants the Mountaineers to play an “NFL-like schedule,” and to that end he is finalizing a neutral-site game vs. Tennessee in Charlotte and may also play Virginia Tech in Washington, DC.

Luck also told The Charleston Gazette that they have reduced a six-game series against East Carolina down to two games. West Virginia will now host East Carolina in Morgantown in 2017 and will travel to face the Pirates at Dowdy-Ficklen Stadium in Greenville in 2020.

As previously mentioned, one of those neutral-site games is against the Tennessee Volunteers. Hammond said that they are “…close to finalizing a deal to play Tennessee in Charlotte in 2018.”

West Virginia is also in conversations about playing Virginia Tech in Washington, DC. That game would be played at FedEx Field, the home of the NFL’s Washington Redskins. West Virginia faces BYU there in 2016.

With the East Carolina series pared down to just two games, the Mountaineers now have more openings on their future schedules. One of those has been filled by Georgia Southern in 2015, according to the Gazette.

The Mountaineers have been busy the last few months with their football scheduling. WVU has added home-and-home series vs. Penn State and Virginia Tech and still remain close to to renewing the Backyard Brawl.

Good for them, even if the travel radius isn’t that large. That’s great for the fan base and their travel budget, and they’re still scheduling (anticipated at least) quality opponents. I just wonder how much longer Holgorson can hang on to the job and those tufts of hair. I can say that, I’m bald.

West Virginia should play Tennessee in Knoxville. Tennessee should refuse to play them in Charlotte.

Sounds like most of the games are trying to limit the fallout should they lose, LOL. ECU plays terrific football and Power 5 conferences have very little to gain by playing them. Win…well you should have since they are non-P5. Lose…and the embarrassment is headlined across the nation. Just ask UNC and Virginia Poly. Notice they certainly scheduled down in risk by playing Georgia Southern and it does not appear they will even have to travel to Georgia for a return game. Win,Win for WVU.

I would love to throw in my two cents, but enough of these neutral field games. College football was meant to be played in a big time college atmosphere. No matter where it would be at Morgantown or Knoxville. It would be an instant classic for people from WV. We love bigtime games with bigtime teams. And any team that can sell out a 100,000 seat capacity stadium is bigtime SEC football. This game is being played in NC, because of Politics smallatics. They need to play in Morgantown.