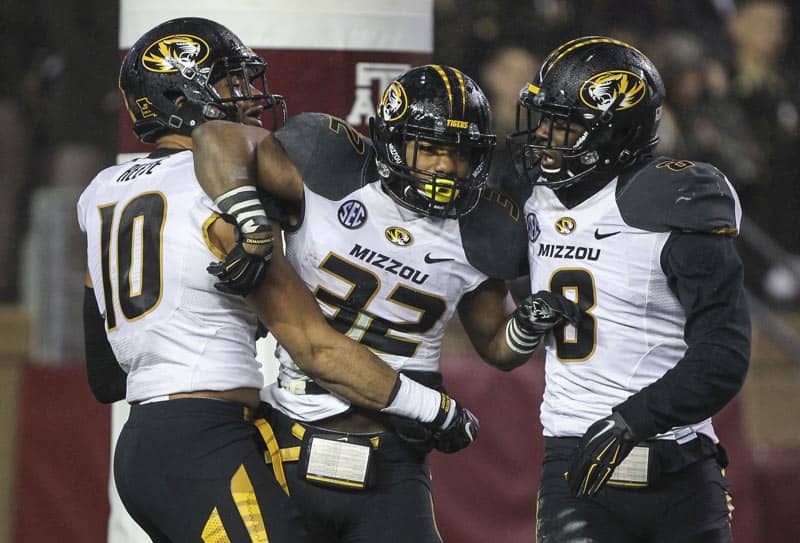 Eight Is Enough: Of all the weeks to have eight games, it’s this one. The marquee matchup for the weekend is Ole Miss at Arkansas. Sure, Arkansas just shut out LSU, 17-0, but the win was the Hogs’ first since 2012. Do the Razorbacks know how to follow up a win? I guess we’ll see.

Then again you have Tennessee and Missouri playing in Knoxville with ramifications for both teams. Missouri can’t clinch the East Saturday with a win, but Georgia can with a Mizzou loss. The Tigers win the East for the second consecutive season if they can beat Tennessee this week and Arkansas next Friday. In other words, Missouri will have won more Eastern Division titles than not since joining the SEC in 2012. That inaugural season would be the only year they did not make it to Atlanta.

The remainder of the conference slate is about to make a few athletics directors at smaller schools very happy. Alabama, Florida, Kentucky, South Carolina and Georgia play much smaller programs on Saturday and will pay high six figures or more to these schools to get a “guaranteed” win. Don’t ask Florida about guaranteed wins. It was this time last year when Georgia Southern went into The Swamp and handed the Gators the biggest loss in Florida football history.

If you’re going to lose, do it right: LSU has figured out how to come out completely flat and finish even flatter a week following its meltdown at home in the closing minute and overtime against Alabama. Not only did they lose to a team that hadn’t won a conference game since 2012, they went ahead and did it right, losing 17-0.

Did I understand correctly that the Arkansas athletics department honored the 2011 SEC Champion and BCS Runner-Up (21-0 loss to Alabama) at halftime? There’s word that Les Miles felt bad that Arkansas went to all that trouble to recognize his 2011 team that he called the dogs off in the second quarter. I’m not sure how you call off dogs when you are the one trailing 10-0, but Les can can do it better than anyone in the nation.

I would have Florida State at No. 1 and Alabama at No. 2 because FSU is undefeated. Then again, I get the reason Alabama is on top, but mix yourself up in some crazy when you try to judge teams based on more than just win-loss record. But Alabama beat No. 1 Mississippi State so they deserve to be there. But I think one logical way to look at it is to move Alabama up three spots to No. 2 and drop Mississippi State three spots to No. 4. But wait. FSU dropped two spots from No. 1 to No. 3 for winning, but not winning big enough.

I’ll bark the same response at those questioning FSU as I barked at “hatin’ haters” when they would question Alabama’s strength of schedule while being unbeaten ranked No. 1. How strong is anyone strength of schedule when you’re ranked No. 1? No team you play is ranked ahead of you. You’re considered head and shoulders above any and all competition and any victory less than a blowout is considered a letdown. All at once, you become a victim of your own success and fatigue sets in (see every writer and broadcaster not in love with the SEC). When fatigue sets in, the next best team becomes the best team. They become the “Karl Malone MVP over Michael Jordan” and backup quarterback all in one. It’s not that Florida State is worse than any team in the Top 4. It’s that they are worse than the 2013 Seminoles.

Does any of that make sense? Bottom line is this — once all conference champions have been crowned on the first Saturday night in December, clarity will reign victorious. It may not be popular, but the message will be clear. Conference championships are king in year one of the CFP. Mississippi State may get in, but it will require help if Ohio State wins the Big Ten. Mississippi State will suffer sitting at home on Championship Saturday while everyone has their eyes on the big stages and the big games. If Ohio State is impressive and everyone else wins out, Dan Mullen’s Bulldogs are forgotten for his old boss, Urban Meyer.

DUE TO TIME CONSTRAINTS, WE MOVE AHEAD TO FURTHER ACTION

WARNING: This prediction piece is loaded with SEC Bias.

Oh no, not again: The last time Florida played a team like Eastern Kentucky at this point of the season was last year when Georgia Southern pulled off the stunning upset. At first glance a casual fan will say, “Muschamp’s players won’t lose. They’ll play for their coach. They don’t want this to happen again.” Remember Phillip Fulmer’s last season in Knoxville after he was fired? They lost to Wyoming. Now Will Muschamp is finishing out the regular season as a lame duck coach here we go. Honestly, Florida has a better chance winning over Florida State than they do this game.

Eastern Kentucky has lost two games. One loss came to the best team in the OVC and one came to Tennessee Tech. Couple the early kickoff with Florida’s inability to really give a dang about much of anything beyond who the next coach will be and you have the makings of another upset. You can also add the pressure of knowing that it can happen to you. Sometimes remembering something in the back of your mind is great motivation. It can also hinder you from doing what you need to do win
FINAL SCORE: Eastern Kentucky 32, Florida 31

Football: This will be a football game between two teams from two different states. Be ready. It’s interstate action on the TV.
FINAL SCORE: South Carolina 34, South Alabama 14

Scoreboard watching: Georgia Bulldog fans may pull out the finest Tennessee Vols gear they can find for this one. I’m not sure they are as worried about this game as they are Tennessee’s game with Missouri and, quite frankly, neither are we.
FINAL SCORE: Georgia ALL THE POINTS, Charleston Southern NONE OF THE POINTS

All about that boss, hog: Not 100 percent sure how I can play this subheading into the prediction, but I thought it was catchy. You did, too? Awwwwwe. Thank you. You are too kind. Bless your heart.

Speaking of blessing your heart — bless the hearts of those Razorbacks that took LSU to the woodshed to treat them like a bunch of 2011 LSU players in the Superdome of the 2012 BCS Championship Game. I hear LSU did pass midfield in this one, so Brett Bielema has something to talk about and improve on in film study and on the practice field. Arkansas keeps it going versus Ole Miss Saturday, knocking the Rebels all the way out of contention in the West.

Here’s how Arkansas will win — Ole Miss has a great defense, but has a hard time stopping a physical run game. If Arkansas has anything, they have a strong run game. I predicted they would run the ball and the clock versus Mississippi State and win a low scoring game. I was dang near right. No more dang nears in this one. Watch for fans rushing the field after this one. It could get cray cray.
FINAL SCORE: Arkansas 19, Ole Miss 13

Nobody play, nobody get hurt: I know there may be people attending their first game Saturday that want to see their favorite players play and all that stuff. I get it. I really do. But wouldn’t you like to get a glimpse at the future of the program? Yeah. Of course you do. Nick Saban, you have my permission to sit the entire starting lineup so they can study and rest up for next week’s Iron Bowl. Thanks, Nick.
FINAL SCORE: Alabama A BUNCHA POINTS, Western Carolina NOT MANY POINTS AT ALL

Georgia loves them some Tennessee: Georgia can’t wait for this one. The Dogs are fired up and ready to go. Too bad they aren’t the ones playing in the game. Georgia has to rely on Tennessee or Arkansas to punch their ticket to Atlanta. Otherwise, Missouri is playing yet another SEC Championship. Their second in three years as an SEC member to be exact.

Bowling wins: If Tennessee wins, they are bowl eligible for the first time since 2010. A win this week and a win next week will more than likely put them in the Music City Bowl in Nashville. Either way, it looks like a state of Tennessee bowl for the Vols with the Liberty Bowl and Music City Bowl clamoring for ticket sales. Tourism dollars would fall a little for each bowl, but not by enough that they wouldn’t want Tennessee fans that are happy to be in the bowl game buying up tickets and food and possibly a hotel for a  New Year’s weekend. Start planning your New Year’s weekend, Vols fans.
FINAL SCORE: Tennessee 34, Missouri 31 | 1 Overtime

Just win, Statey: Dan Mullen lectured the media Saturday night in Tuscaloosa following the loss to Alabama because, unless you’ve been out there on the field, you don’t know how sick of a feeling it is to lose like that. Sure. You may be right, Danny, but let’s cut the “We ain’t used to losing” bit. Before 2014, your MSU teams were overrated, overinflated and mediocre at best. Now you win a few games in 2014 and this program doesn’t understand losing? Whatever. The good news for Danny and the fans is they won’t have to worry about that sick feeling this week.
FINAL SCORE: Mississippi State 34, Vanderbilt 10

I would not really worry that much about Florida losing to E.Kentucky, I just don’t see if happening. All the other predicts look pretty good but the Ole Miss vs Arkansas may be a toss up due to Arkansas coming off a shutout win against LSU.