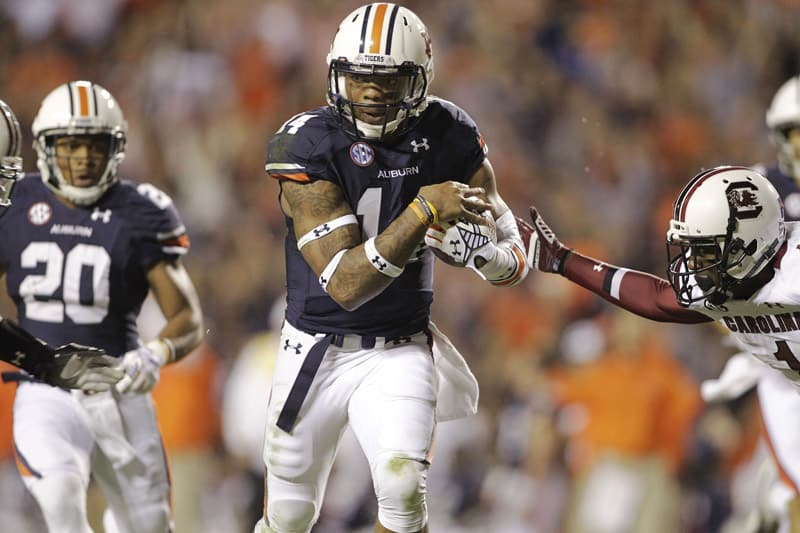 Hugh Jeez: Good job by Hugh Freeze selling out his quarterback after Bo Wallace threw the interception to seal the 10-7 loss to LSU when he should have never been on the field to begin with unless he can kick a 47-yard field goal. A quick way to go from the darling of the SEC and the nation to a coach who could lose his team all at once after a loss is to throw a player under the bus. Maybe Hugh isn’t accustomed to losing, but he returned to mid-season form in an instant. Maybe not. Regardless, the fans — and especially your quarterback — deserve better. One bad play from a guy who has elevated the university to its greatest ranking since Elvis’ skinny years deserves that privilege.

U. The answer is U: The sounds of “LSWho” were quite deafening following LSU’s 0-2 SEC start. They now have an answer. It’s LSU. No longer are we forced to Google “Who, LS” in hopes of figuring it out.

The Tigers won in true Les Miles fashion — a low-scoring, ugly game on a Saturday night in Baton Rouge, where yet another team’s dreams went to die. The dream may not yet be dead for Ole Miss, but at the least it is taking an extended nap under heavy sedation.

Still No. 1: Mississippi State survived their first game as the No. 1 team in the country beating Kentucky 45-31. The most we can take from this game is the Bulldogs — like most teams — are different on the road than they are at home. This is also just the beginning of life as king of the mountain for the Bulldogs. They still have Alabama and Ole Miss remaining on the schedule and both games are on the road. Basically, this is just another way of stating that SEC WEST WOOOOHHOOOOOOO!

College Football Playoff Selection Committee Top 25 Powered By Secrecy: The debates will get even more heated following the ESPN televised announcement of the committee’s top 25. The question is how much will the top four change each week and how much will the final selections for the CFP differ based on the eye test if No. 5 looks more impressive in a win than No. 4 in a win. The eye test is much more important now, but what good is a playoff if we continue to use perception and opinion to determine which teams will play. All of this will lead to one unanimous agreement which is eight is the perfect number for a playoff.

The voting will not be transparent and I can see, to a point, how that makes sense. But the best way to answer the critics following the final poll is to provide a running narrative of your selections each week. Tell why you moved a team from No. 6 to No. 4 or why a team stayed the same. You don’t have to tell why you moved Rutgers out of the top 25, but it can’t hurt to have reasoning behind each week’s picks so when we get to that final week fans and critics can, 1) Better understand why you came to that conclusion, or 2) See that you used completely different logic when selecting the final week’s top four.

Being 6-0 for the week AND getting many of the scores almost correct makes me feel a little more like a man every minute. Useless prediction (but I repeat myself) here, but I see the Top Four’s inclusion of three SEC (West) teams as a way the committee can show they were open to more than one SEC team — maybe even three — before restating and reestablishing that they give preference to conference champions while claiming the SEC received one team because you need all regions represented in this playoff.

No need to fret over the CFP rankings. It will all work itself out for the best after all the games are played…as long as my team and conference get proper preference from the committee.

Keep reading. I start talking about scores of football games that have yet to be played.

Make it stop: At this point of the season, I think A&M just wants the bleeding caused by the past two losses to at least slow to a trickle. There’s not much to say about this game other than the Aggies could fall flat if they try to come out and assume Monroe is there to lie down so they can feel better about themselves and become bowl eligible. A&M has gone from a top-five power to a team that may qualify for the Music City Bowl in the past two months. Momentum needs to begin to build and the bleeding needs to stop by the time this game is over Saturday or it’s going to be a long season for Kev and the Aggs.
FINAL SCORE: Texas A&M 34, ULM 28

If they lose this one: Georgia should be a lock to win on Saturday, which would be their fourth consecutive win in this series. I think that hasn’t happened since before Karate Kid and Back To The Future were released in theaters. Then again, Florida can get in the Bulldogs’ head just as much as they do Tennessee’s. Florida just has a way of playing their best football of the season in this game. In other words, if Georgia loses this one, there’s no telling what will happen in the East.

I still see the Dawgs getting their TCB on in this one (not the best yogurt in the country, but Taking Care of Business).
FINAL SCORE: Georgia 46, Florida 13

Ready to pounce: There’s Missouri sitting just behind Georgia in the SEC East in November. Actually, they are tied for first, but the tiebreaker goes to Georgia since the Bulldogs pounded the Tigers 34-0 in their head-to-head matchup. Regardless of that crushing defeat, if Missouri can win out and Georgia drops a game to Florida or Auburn (possible) or Kentucky (less likely), the Tigers could pounce on the SEC East lead and take home a back-to-back SEC East championship. There’s only one problem. I don’t think Missouri beats Kentucky at home. Oops. Now Kentucky is in position to win the East again. Football is being cray cray in 2014.
FINAL SCORE: Kentucky 28, Missouri 21

The biggest game of the year since last week: Every week seems to feature a huge matchup out of the Western Division and this week is no different. Not only is it the biggest game, it grew even bigger all in one small moment at 7:30 p.m. ET Tuesday night when the College Football Playoff Selection Committee released its rankings. Auburn is ranked No. 4 in the AP Poll while Ole Miss had dropped to No. 7. This game is now No. 3 Auburn versus No. 4 Ole Miss. CBS has to feel great putting that Florida-Georgia game in ink before the season started.

Uh Oh Miss: As much as I love this Ole Miss defense and have enjoyed watching the historic Rebels run, I’m afraid the loss at LSU might have turned this carriage into a pumpkin. I’m not saying Ole Miss is a Cinderella team, but there’s not exactly a stack of newspapers that would establish precedence. We can’t refer back to a few years ago when Ole Miss was in a similar situation this late in the season and “XYZ” occurred.

For the sake of my Ole Miss friends out there who suffered through so many bad coaches and mediocre success, I hope I’m sorely wrong. Unfortunately, I haven’t been wrong too many times this season, so…..
FINAL SCORE: Auburn 23, Ole Miss 17

Ummmmmm: I think Vandy has a chance to win, but I don’t think they will.
FINAL SCORE: Old Dominion 31, Vanderbilt 21

Sometimes the road is kinder to No. 1: Too many pats on the back can cause you to injure your sense of reality and, most importantly, sense of urgency. This State team appears pretty well grounded, but the air is thin at the top of the mountain and the weight of a No. 1 ranking gets heavier the longer you carry it. The Bulldogs have been great at home, but coaches don’t have to worry about all the pats on the back and other distractions that may get a player’s mind on something besides the game while the other side has laser focus as they’ve thought of nothing but this game versus the No. 1 team in the country.

Run the ball, run the clock: If Arkansas can do both successfully, we may have our first defeat of a No. 1 team this season. Florida State fell from No. 1, but it was because Mississippi State took over after its win over Auburn, not because the Seminoles lost.

I see Arkansas having a pretty good day on Saturday. The defense doesn’t have to stop Dak Prescott, they just have to slow him down enough to keep the run game relevant. The Hogs don’t want to get down three scores early. That will force them into the passing game which will just extend the game and play right into State’s hands.

The run game will be Arkansas’ best defense, and I expect they will run successfully enough to frustrate the Bulldogs by the fourth quarter. I expect this one to have a slight resemblance to State’s game with Kentucky, but Arkansas finds a way to shock the SEC, the world, and themselves as they end their 16-game conference losing streak by beating No. 1 Mississippi State on the road.
FINAL SCORE: Arkansas 20, Mississippi State 17

Missing quarterback located in Knoxville: The Vols have been hurting for a quarterback that felt more like an asset and less like a liability since Butch Jones arrived. It seems they spotted him on the field Saturday night against Alabama in a 14-point loss. Josh Dobbs used his feet to give Tennessee a chance to compete after falling behind 27-0 in the first quarter. His feet created some soft spots on the field to show off the arm and he did just that with 75 yards rushing on 19 carries and completing 19-of-32 passes for 192 yards and two touchdowns. For those of you who like to have math given to them, that’s 267 total yards as the leading rusher and passer while playing about three total quarters. Tennessee’s 181 yards rushing is the most Alabama’s defense has given up the entire 2014 season.

Out of ammo: South Carolina might have just exhausted all remaining ammo Saturday night in Auburn. Steve Spurrier’s Gamecocks put 35 points on the board, but it was still seven points short. Tennessee appears to be finding its identity and the Gamecocks are still trying to sort out the details after Texas A&M’s hit and run in Columbia in September. They’ve never recovered from that game — save the Georgia upset — and I think they used up anything they had left in Auburn last week. Tennessee, on the other hand, may run the table and end 2014 the way they plan on spending much of 2015 — winning much more than losing. Don’t forget — Tennessee found a way to beat South Carolina with a team that had much less to work with than this season’s edition.
FINAL SCORE: Tennessee 30, South Carolina 27

I don’t see Carolina losing to Tenneessee AT Columbia. Also,Tenn. is said to have a horrible OL–and that alleviates Carolina’s greatest weakness in 2014 (i.e. D L pressure and general effectiveness). But we shall see !

Those O-Line problems went away as soon as Dobbs stepped on the field. It’s easier to block when the defenders have no idea who’s blocking who and where the ball is going.

Absolutely. Dobbs provides that extra step that can force the defensive line and linebackers to back off just enough to stop the onslaught of much-better linemen flying around the ball. I like Tennessee’s chances the rest of the season. Georgia better hope they can take care of Missouri or ouch.