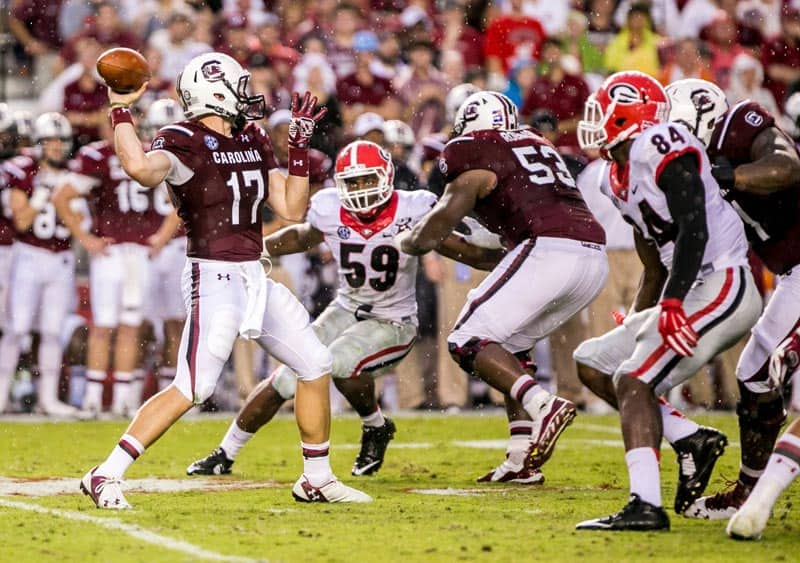 Let’s take a look at those contests, as well as few others, and see how we can categorize them to put the third week of college football contests in perspective.

The Gamecocks upset victory over the Bulldogs is my week three “Best of the Best” contest. Nobody really expected South Carolina to win, but of course, one should never count out the Head Ball Coach and his magical tricks he can pull off. Dylan Thompson had a fantastic day on the South Carolina side of the ball.

Seriously though. Who saw any of these upsets coming? And, the best part of it all – they were all so close! The Pirates bested the Hokies by seven, the Gamecocks won by three, the Cavaliers won by two and the Eagles won by six.

Sure, it is fun when there are so many upsets in a week, but please, for my heart rate (as well as the heart rate of America) can we please wait a few weeks to do this again? Thanks.

These games really are “toss ups”. I mean, BYU should have beaten Houston by a few more, but then again, maybe Houston is a sleeper this year? Georgia Southern sure isn’t one too mess with. In their last three major contests, they have upset Florida, almost upset NC State and now almost took down Georgia Tech.

The West Virginia-Maryland and Florida-Kentucky contests were tough to watch. Sure, Clint Trickett (WVU) had a spectacular game and led his team to victory, but the Mountaineers blew a 22-point lead!

Florida just didn’t have all the pieces together against Kentucky, and although that normally is not a problem, this Kentucky team is not one to screw around with. If Will Muschamp pulls this a couple more times this season, he’ll be out of a job, and if not – you can sure bet the boosters will put athletic director Jeremy Foley on the hot seat.

Vanderbilt pulled a Vanderbilt this week and, although Derek Mason gets his first win as a ‘Dore, he just barely squeaked a win over UMass – nothing to be too happy about. He beat a team that decided to try FBS ball, only to decide they should have stayed at the FCS level, by three.

Speaking of Vanderbilt coaches, I expected more out of James Franklin and the Nittany Lions than a three point victory over Rutgers – especially after the performance they gave overseas to open the season.

Congrs to Boston College & Virginia on their wins! Hopefully BC can keep it up & be 8-4 or 9-3. South Carolina & Georgia have proven great games over the years & makes for wonderful television.

Georgia Southern is two fumbles and 5 points away from being 3-0 vs P5 teams in three games. Being in a hotbed for recruiting I have a feeling we are going to be hearing a lot about them in the coming years.

ECU beat an ACC school….. who DIDN’T see that coming? The Pirates now have three in a row vs. the ACC. The fourth in a row might happen this weekend.

Vanderbilt ‘ s problem is not talent or recruiting. It seems to be coaching competence and nepotism, on the offensive side of the ball. When you look carefully st the offensive play calling it reveals a shocking reality of an incompetent OC trying to create opportunities for his own son, who shouldn’t even be playing in the SEC! OC Dorrell has never had success as a QB coach or WR coach. He has made no progress developing ANY of 6 QB’s on the Vanderbilt roster! Despite them having elite QB backgrounds! Lastly, the OC is like Derek Mason’s Daddy or mentor! Coached him in college, etc.! So he can’t tell him he sucks! And he can’t fire him! I am so pissed st Mason’s decision a guy with such a track record of incompetence, Karl Dorrell!