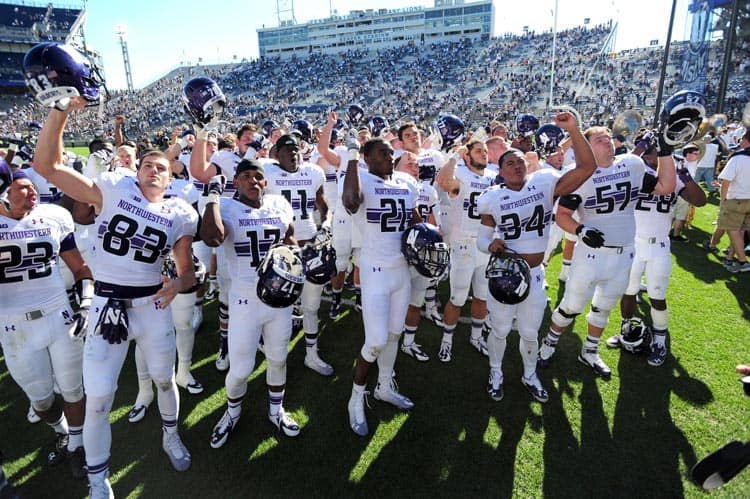 Five weeks of awesome college football. Man, I’ve been waiting a long time to be able to say that. This week, like each previous week, contained a few games I felt were worthy enough to be categorized.

Without anymore delay, let’s see what game(s) can be dubbed the “Best of the Best” for week five.

Both of these games qualify as “Best of the Best” contests this week. The Aggies just barely survived against the Razorbacks, but even better was the fight Bret Bielema’s team gave the Aggies. Arkansas punter Sam Irwin-Hill perfectly executed a fake punt that resulted in a 51-yard touchdown run.

In another SEC showdown, the Missouri Tigers upset the Gamecocks, which aren’t really having the season everyone thought they would, with a 21-20 victory. This one could really bite the Gamecocks in the butt when bowl season comes around.

Who Saw That Coming?
Northwestern over Penn State 29-6

Penn State has been having a pretty solid year under new head coach James Franklin, but a 29-6 loss to Northwestern was not in the game plan. I honestly don’t know what to think about this one.

Before we even dive into this one, let’s start at the bottom and work our way up. The ‘Noles just barely squeaked out a victory against North Carolina State and may have hurt its chances at getting into the playoffs. Sure, they pulled out the victory and against Clemson, but they were very sloppy in both wins.

Minnesota bested Michigan 30-14 and moved Brady Hoke one step closer to being shown the door as Wolverines head coach. Charlie Weis is now out at Kansas, and it may not be much longer until we hear Hoke is unemployed.

In an SEC showdown, #12 Georgia defeated Tennessee by three points, but should have won by a bigger margin. And finally, the #11 Bruins straight up embarrassed the #15 Sun Devils. Arizona State, ranked just four spots below UCLA, fell by 35. UCLA isn’t one to sleep on anymore, folks, and well, Arizona State has to recover from this to be successful this season.

The Hogs SHOULD have won that game damn it, you know the age old statement A&M didn’t beat us we beat ourselves. The second penalty was okay, but the first one that negated the touchdown was a rip off, but we are used to those. And I absolutely will not blame that loss on our player- I blame it 100% on the coaches and the sickening dim wit houston “nut” up the middle play- last play of the frigging game. We didn’t throw a pass that could have continued the game, we have to run up the middle – again- tho already knowing we’d been stopped many times. I am absolutely sick and pissed off at that asinine brainless play. Our coach has a lot of learning to do.
DAMN IT.

bad coaching decisions by the Arkansas coaching staff at the end of the game? Shocking!

Haha, Bucky, assuming your name matches your college mascot, I’m sure you’re just shocked that Bielema could choke away a win like that.

Right and thank you!