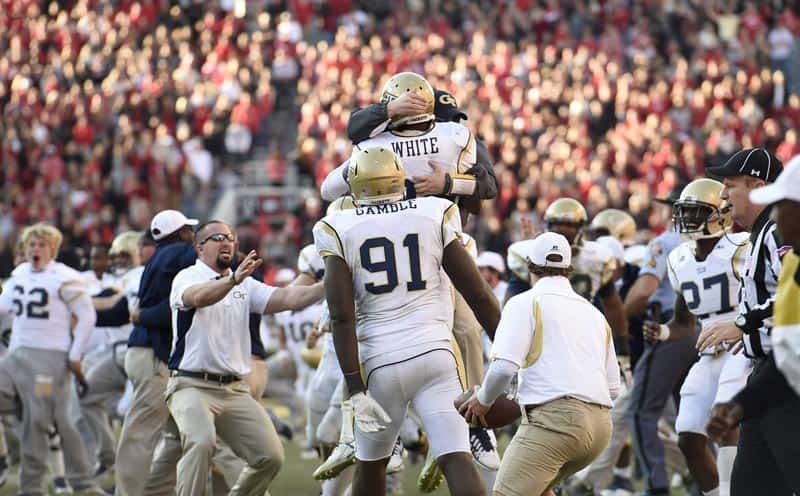 Well, folks, the 2014 college football regular season is almost behind us.

After such an amazing week of contests, let’s categorize the regular-season contests one last time.

These two games, to me, were definitely this week’s Best of the Best contests. These two rivalry games are always a blast to watch and the 2014 match ups did not disappoint.

The Tigers tried their hardest to keep the game much closer, while the Yellow Jackets shocked the Bulldogs in overtime.

Let’s be honest. Who saw these three games turning out this way? Okay. Maybe some saw Ole Miss over Mississippi State, but by two touchdowns?

Western Kentucky completely stunned the Herd in overtime, Ole Miss went back to its ways of dominance we saw early in the year to beat their rivals, while Stanford upset UCLA big time.

These last two games to categorize are my toss up contests.

Baylor bested Texas Tech by two points, which is why the game made this week’s toss up category. To me, Baylor allowed Texas Tech to get way too close to a victory this weekend, while Florida State did the same thing with Florida.

The Seminoles are ranked third in the nation (as I write this) and should not have let the Gators get as close as they did to victory. However, much of the blame goes to Jameis Winston who had four passes picked off.

Poor Georgia, they got bumped from the SEC championship & then beaten by their rival in OT. I can see Ga. tech beating FSU this weekend, with their high gun offense, if Tech gets to far a head of FSU the Seminoles may not be able to catch up the way their playing. Never thought the Iron bowl will turn out like a PAC12 shoot out, Auburn is a great team but really needs to work on their defense, I guess Bama allowing 44pts needs to work on their defense as well. Florida had great opportunities to win but kicking field goals is not going to do against FSU. Marshall finally lost, now we can stop talking about them in the playoffs.

@Harvey. This is the best you could come up with after this past weekend. Pretty weak overall. I definitely believe there are a few other topics more deserving of some overdue recognition. “Who saw that coming”. How about, who saw the ACC stomping out the SEC? Far more deserving than Marshall. Anything could have happened with the Egg Bowl-they are two very good teams and its a huge rivalry. And who saw UCLA loosing to Stanford? I did, UCLA has been overranked since the first game of the season when they scored one offensive td on a Virginia team that was 2-10 the yr before. In my opinion, don’t care whether anyone says they have the toughest schedule in college football, UCLA wouldn’t be in my top 25. So who saw that coming? Anyone who pays attention to things other than just skewed rankings.

Sorry, but anyone who pays attention saw the outcome of the Ole Miss/Miss. State game coming. No shock at all. If Treadwell were healthy, I think Ole Miss would have beat them by 30. That’s not to say Ole Miss is good, because they’re not. It’s just a poor matchup for Miss. State. When you have one of the worst pass defenses in the entire country without playing some of the better passing teams, disaster looms. Other than that, the Alabama/Auburn score was surprising and how easily Stanford beat UCLA. UCLA has been too hot and cold all season. If they bring their “A” game, they can beat anyone by double digits. But when they don’t, this is what happens.

Anyone read Andrea Adelsons article, “ACC Delivers message to SEC” pretty awesome article. Best one I have read in a while. Some very meaningful points she made.