Week 8 College Football Game to See Live: No. 5 Florida State at No. 3 Clemson 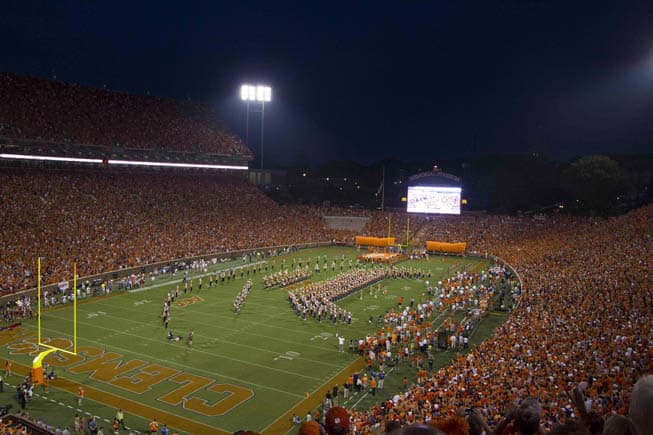 FBSchedules.com “Must Visit Game of the Week” – in conjunction with StadiumJourney.com

If you are looking for a big time game in a big time atmosphere with national title implications added to the mix during Week 8 of the college football season, make plans to travel to Clemson, South Carolina, as the Clemson Tigers play host to the Florida State Seminoles at Frank Howard Field at Memorial Stadium, better known as Death Valley.

Fans headed to the game will find a game day atmosphere that involves over 80,000 fans in the stands, massive tailgates, and a college town full of pubs and taverns for fans to visit. With the game scheduled for an 8pm kick, fans will have the option of tailgating all day or dropping by establishments such as the Esso Club, the first place to gain a beer license in Clemson following the passing of the 21st Amendment and the ending of Prohibition. Perhaps more importantly, ESPN The Magazine selected the Esso Club as the top college sports bar in the country.

While fans will have to walk a bit from the parking lots to get into the stadium, once inside, a trip to Howard’s Rock for one of the great college football photo opportunities is a must.

Howard’s Rock also plays a critical role in what Brent Musburger once called ‘the most exciting 25 seconds in college football,’ referring to the Tigers running down the hill to the field after gathering around Howard’s Rock in front of Fike Field House.

As for the game itself, the Tigers and Seminoles square off with hopes of winning the ACC Atlantic Division and the ACC Title on the line, and with that, quite possibly a crack at the BCS National Championship Game. Two Heisman-contending quarterbacks will be on display as Tajh Boyd leads the Tigers, and Jameis Winston will trigger the Seminole offense.

Justin Sutton is a Special Correspondent with StadiumJourney.com.

Howard’s rock is not in front of Fike Field House. The field house is several hundred yards up the street from Howard’s rock. Please check your campus map before you write your next article !