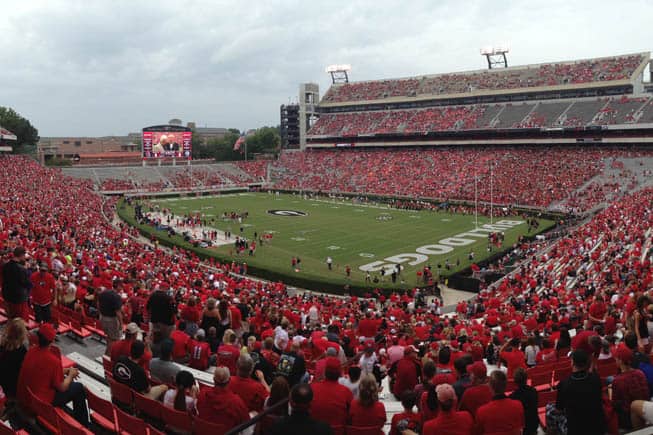 Tigers on a Tear as They Roll into the Dawg Pound

Week 5 of the college football season sees an uptick over the previous week in terms of quality games on the slate, but only one stadium will play host to a battle of Top 10 teams. That battle, between league brethren no less, will take place between the hedges of Sanford Stadium.

The hungry LSU Tigers arrive in Athens after having roared out to a quick 4-0 start and a statistical SEC West divisional lead over the #1 ranked Alabama Crimson Tide. The Bulldogs of Georgia enter Saturday’s pivotal early season matchup having rebounded with two wins over a Top 10 team in South Carolina and North Texas of Conference USA. The back-to-back wins come on the heels of a heartbreaking season-opening loss to 3rd ranked Clemson in a tightly contested game played at “the other” Death Valley, Clemson’s Memorial Stadium.

If you are a fan of live college football, then Sanford Stadium is the obvious choice for you this weekend. Athens is one of those storied college towns, often stoic for most of the year, save Fall Saturdays. Fall Saturdays are more than just another day, as football game days morph into the culmination of a celebrated game week.

This is the town that gave us legendary music from the likes of REM, the B-52’s, and Widespread Panic. The picture perfect landscape of the idyllic North Campus gives way to Sanford Stadium, the location that will ultimately serve as the centerpiece, the epicenter, of college football in the state of Georgia.

As soon as the coin is in the air and the football flies off the tee, all the eyes of Athens and much of the surrounding state, are on the 100 yards of glorious green grass found between the famous English privet hedges.

Saturdays in Athens gave college football the legendary voice of Larry Munson, a voice who fell silent from the airwaves upon his retirement in 2008, but after 42 years of calling Bulldog football still echoes through the concourses and portals of Sanford Stadium.

Saturdays in Athens gave us greats like Fran Tarkenton, Frank Sinkwich, Terrell Davis, Hines Ward, Matthew Stafford, and Herschel Walker. Those great players, and the thousands of others who have donned the Georgia ‘G’, have given the university 2 National Championships and 12 SEC Championships.

Through the many years, one thing has remained consistent through the numerous changes, through all the highs and lows of Georgia Bulldog football. Simply put it has been Sanford Stadium.

Sanford Stadium opened in 1929, seating 30,000, and largely built using convict labor. Fast forward 84 years and nine expansions later and Saturday’s showdown against LSU will see Sanford Stadium’s red-clad crowd of 92,746 rabid fans cheering every first down at the top of their lungs.

The crowd will roar in unison as each side of the stadium alternates countless renditions of “GEORGIA…BULLDOGS!” The crowd will erupt in applause each time the massive 52’ x 76’ HD video board shows the image of Russ, a.k.a. the beloved English Bulldog Uga IX, roaming the sidelines in his signature red jersey sweater and spiked collar, drool dripping with delight each time a human bulldog finds the end zone.

No doubt the Georgia faithful are already themselves drooling at the thought of a big victory over LSU on Saturday afternoon. A win would further cement one-loss Georgia’s status as a legitimate national championship contender. A loss, even in the “weaker” SEC East, would almost certainly mean the Bulldogs would face a steep uphill climb, and ensure needing a lot of luck along the way, to reach Pasadena to play for the 2014 BCS National Championship.

Win or Lose, come Saturday, Sanford Stadium will be swaying in anticipation, just as this hallowed ground of college football has been doing since the day the gates swung open. If you have the chance to be there, get there. You won’t regret it.

Norm Cook is a Special Correspondent with StadiumJourney.com.

I hope them little puppy Dawgs are ready for the Beating The LSU TIGERS have in store for them. GEAUX TIGERS!!!!

You are wrong brother, them kittens are going down!

time to step on a tiger tail. go dawgs

Should be a good game… both teams are on winning streaks since being beaten by Clemson :)