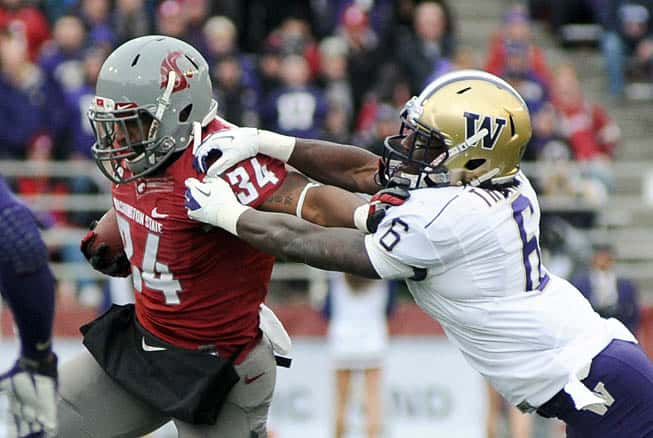 The Washington Huskies and the Washington State Cougars have each added the Portland State Vikings to their future football schedules.

Both games are listed in Portland State’s 2013 football media guide. Portland State is also set to visit Oregon State on Aug. 30, 2014, but that game was previously announced.

Washington State will host Portland State at Martin Stadium in Pullman on Sept. 5, 2015, which will be the season-opener for both schools. The Cougars are 1-0 against the Vikings after winning the first meeting 48-9 in 2008.

The addition of Portland State tentatively completes Washington State’s 2015 non-conference schedule. After opening with the Vikings, the Cougars travel to Rutgers on Sept. 12 and then return home to host Wyoming on Sept. 19.

The Washington Huskies will host Portland State at Husky Stadium in Seattle during the 2016 season. A date for that game is to be announced.

Washington first played the Vikings last season in Seattle and came away with a 52-13 win.

yes pnb they copied the sec on that one. so when alabama plays chattanooga and a couple sun belt teams. Every Sec team plays a fcs game. and several play an fcs team and 3 mid majors all at home for their non conference.

Remember Georgia recently cancelled a home-and-home series with Oregon, forcing holes in the Ducks schedule. SEC schools show an ongoing habit of cancelling series or only wanting to play neutral games in Dallas, Houston and Atlanta, but not wanting to cross the Rockies for home-and-home series. Kudos to the Volunteers for keeping their commitment.

Do keep in mind some programs, namely Florida, So Caro, Georgia, Kentucky, USC, and Stanford, have the fortune of an annual out-of-conference rivalry game on their schedule, making scheduling easier.

If/when the SEC goes to a 9-game schedule, then we can start comparing (maybe 2015 or 2016?). Until then comparing schedule strengths is futile.

Nice job Huskies!. Spend $260 million dollars making Husky stadium one of the best venues in the country, raise ticket prices and then sell only hamburger out of conference games for the next 5 years. Boise this year and then 2018 before Wisconsin arrives. North Dakota , Georgia State, Portland State, Sacramento State, Eastern Washington, Montana.. are you to make Illinois the cellar occupants of the Big 10 look good? You got rid of UCLA or USC every year and gave us Utah and crappy Colorado…nice job!

So what team are you rooting for? who do they play at home? like woody said above, pac12 has 9 conference games, there are few easy games in. so UW has started scheduling one fcs game a year. the other 2 generally rotate between one midmajor and a name game or bcs team. last year they played at LSU and this year at illinois. As far as Wazoo, they are rebuilding from the groundfloor, one game a year that is winnable followed by the likes of Oregon, USC, Stanford, Or. State,..

Who’s *us*, Idaho? ROFL. See if you were in a recognizable conference that might be you.

A good number of programs from the Pac-12 and Big12 have been attempting to build their 3-game non-conference schedule to include one major, one “mid-major” and one FCS program.

Washington really is no different. The Huskies still need to schedule a major non-conference opponent for both 2016 and 2017 (just as the Ducks, Sun Devils, and the Wildcats still need to do). Texas A&M needs a major non-conference opponent for both 2016 & 2017. How about a home-and-home between the Aggies and Huskies? (The Ducks are scheduled to face the Aggies in a 2018-19 home-and-home).

Would be good to see Auburn agree to play the Ducks in a 2016-17 home-and-home. If not, then Texas Tech, Illinois and BC are still needing to schedule major non-conf opponents for both 2016 and 2017.

Looking at future Big12 non-conference schedules, appears many Big12 programs (not Texas, Oklahoma, West Virginia or TCU) are having difficulty scheduling major non-conference opponents, unless agreeing to play a “neutral-site” game (e.g. in the opponents backyard). Iowa State should be thankful for the annual non-conference rivalry with Iowa.

Regards to scheduling an ACC non-conference opponent, unless it is Florida St, Clemson, NC, VT, Miami FL or GT, a home-and-home with other ACC programs will not likely provide a positive SOS benefit. (And it is difficult watching GT’s style of play).

Programs like Colorado and Baylor, saddled with annual rivalries against non-major conference opponents (Colorado St and SMU, respectively), will find it difficult improving their SOS, unless they can figure out how to schedule a top non-conference opponent every year.

Forgot to add: Kansas State’s SOS is exactly where it should be after cancelling the home-and-home with Oregon.

With Bill Snyder’s preference for weak non-conference schedules, KSU will find it very difficult to go to the natty without going undefeated. The Big12 not having a conference championship game is just damaging.

The ACC, with the recent “special part-time” add of Notre Dame (5 games), appears to remain committed to playing only eight conference games. Thus, many ACC programs will be hard pressed to improve their SOS.

I see why the B1G did it, but I think it’s pretty narrow-minded. Playing a school such as ND State, Sam Houston State, Montana State, Eastern Washington, etc. is better than playing someone like Idaho or Eastern Michigan.

lot of good points Woody, especially the sec’s idea about the so called ‘neutral’ game, which usually involves a west coast or northern team going to the sec’s backyard, complete with southern refs. The acc might be difficult for them to switch to 9 games.as you mentioned some years if FSU plays notre dame, along with the gators that only leaves 2 other games. I can kinda see why they would stay at 8.

A book could be written about how the sec skates by ( scam newton, manzel) with no infractions while the ncaa lays the hammer on the better non-sec schools such as USC, Ohio St, PSu, etc.

The SEC gets their share of hammer-drops. Georgia’s A.J. Green was suspended 4 Games in 2010 because he sold his Outback Bowl jersey to someone for $1,000. 4 games!!

And Manziel is still under investigation, but so far no proof has been offered that he accepted money. Cam Newton skated by on an NCAA loophole.

As far as USC and Ohio State, the evidence was there.

Except for FSU/Florida, Clemson/South Carolina, Georgia Tech/Georgia, the ACC’S OOC is not strong. I do see a few of their tesms beefing up their future OOC schedules, but still you have to win those games. The ACC should also go to a 9 game conference schedule, even if Notre Dame is on your schedule for that particular year.

Is there any chance that the Huskies will schedule any decent non league games before Wisconsin in 2018?

No clear effort to date. Sark needs to figure out how to be better than the 6th best team in the Pac 12. With the addition of lowly Colorado and Utah and having California and WSU in the league, Sark does not need to do much to stay in that safe middle tier of the league, getting blown out a couple of times a year and collecting 2.5 million in the process.

Now that Wisconsin has pulled out of their series with Washington in 2018 and 2019, BYU has once gain taken their place. Ho Hum, another dumb down to godwits North Dakota and Nevada.