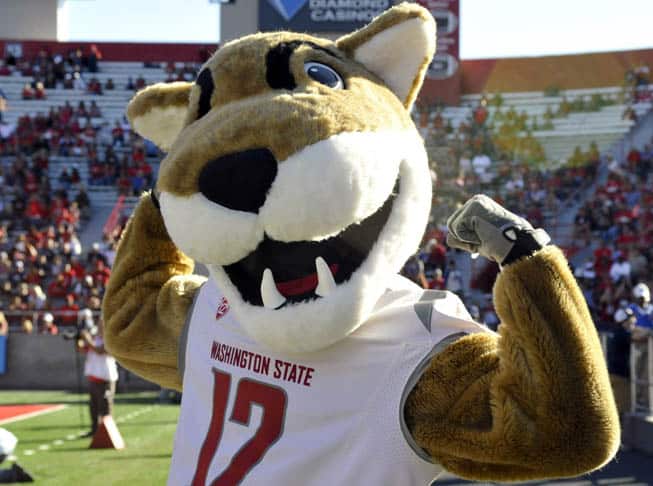 WSU will play an FCS team each year through 2018. (Casey Sapio-USA TODAY Sports)

The Cougars finalized their future slate with the addition of a home game against Montana State on Sept. 16, 2017.

Over the next five seasons, Washington State will face only one power conference opponent — Rutgers. The Cougars host the Scarlet Knights in Seattle in 2014 and travel to Piscataway in 2015.

“I believe our nonconference schedules over the next five years are a great compliment to our Pac-12 schedules,” said Moos. “We have been able to secure a home-and-home series against Big Ten opponent Rutgers, maintain regional matchups, resume our series against Boise State for the first time since 2001, and also provide Cougar fans with seven home games in four of the next five seasons.”

All the power conference teams play fcs schools. Why single out Washington state?

What a joke. I cant tell whats more pathetic Moos putting that ridiculous schedule together or trying to put a positive spin on that turd.

Take a look at the UW non conference schedule. Really?

The 2017-2018 schedules look a little rugged in playing two Mountain West teams,I can understand the FCS teams for the Coogs. It’s hard to recruit in Pullman and you need to win a little more then most.

Give me a break. Since unlike the SEC the Pac-12 schedules 9 conference games, the Cougs will still have one of the tougher schedules in the nation.

You ain’t kidding….the Pac 12 plus good teams from the Mountain West? Idaho is a cupcake but E. Washington is better then many Sun Belt teams the SEC feasts on. Its a balanced schedule.

Gee, with all the Moos bashing here, looks like CougCenter.

That looks like any SEC team’s non conference schedule.

I only see one FCS team per year on WSU’s schedule. Therefore, this ain’t an SEC schedule.

If wazzu was competing for a playoff spot then all the bellyaching could be justified. Wsu is
Building the program they will play about 7 bowl teams in conference. Playing some regional teams noncon makes sense for where the program is now.

Not mentioned is two of those years they play Boise state which is usually a top 20 team. Like to see a sec team go up to Boise sometime!

Boise was a top 20 team for years. Those days are over. Petersen is gone and so is Kellen Moore. Look for a battle for the MWC as their best hope for the next several years.

BSU was a top 20 team before CP and Moore came along.

WAZZU goes their because they both play in tiny little stadiums that Wazzu cannot sellout and Boise has been unable to sellout their own stadium for the past couple of years. Small market teams that play in tiny stadiums with so so fan support cannot negotiate really good teams for a home & home series. Boise has been able to schedule really good teams to come to Boise on a home & home in starting in 2020. They will always play the first game of each series on the road giving the opponent the opportunity to cancel the trip to Boise with a modest payout if they can come up with something better.

The OOC schedule actually looks appropriate for WSU, and it keeps the PAC 12 conference from picking up to many OOC losses by WSU playing teams they are likely to lose to..

Put a fork in the Leachled cougars. Time to go and the AD he rode in on

Looks as though you don’t know s— Scott, get off my bandwagon you loser.