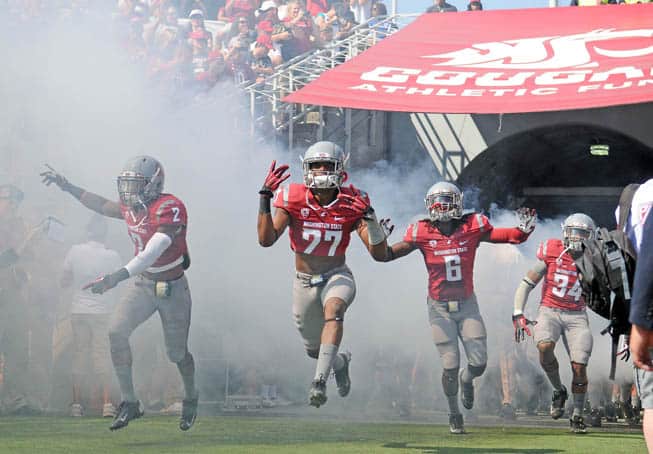 “I have handshake agreements with five different schools, BCS schools, for home-and-home football competition provided it fits into our schedules. I think some of it may be out into the early 20’s and so forth.”

Three of those teams could be Florida State, Michigan State, and TCU. Moos specifically mentioned those three schools when discussing what he accomplished at the Pac-12 Spring meetings in Phoenix earlier this month.

“Talking to friends of mine from TCU and Florida State and other schools like Michigan State. I’m working hard to try and get those arrangements put together to bring schools like that in early to Pullman so that our students and fans can enjoy that kind of competition.”

Moos mentioned that some of the agreements may be for games in the early 2020’s. But the Cougars do have several non-conference openings from 2014 through 2019. It will just be a matter of how tough he wants to make his football schedules.

Here’s a look at what Washington State currently has set:

The 2014 home game against Wisconsin could be in jeopardy if the Badgers finalize a contract to play LSU at Reliant Stadium in Houston. When asked about that possibility, Moos did say he has had “preliminary conversations” with Wisconsin.

“Well there have been some preliminary conversations, but I have not talked to Barry Alvarez,” Moos said.

“This home-and-home series was scheduled in 2006. They (the Big Ten) don’t go to nine conference games until 2016. I would think if they were to pull out of it that they would certainly have the courtesy and the class to move it down the calender, down the years, and maybe play it four to six years later.”

Would like to see Wisconsin play in Pullman, But if the game is going to fall through anyways with LSU. Replace on ranked team with another. Move BYU from 2019 to 2014 and move Wisconsin to 2019.
We were supposed to play BYU in 2013 anyways before we moved it to 2019. Could be a win / win, unless they already have finalized their 2014 schedule.

what the hell is a handshake agreement? Until it is signed and the game is played, it means nothing.

It means he talked with 5 schools and they verbally agreed to play. Working on dates and signing contracts.

All of these home and home contracts begin as a “handshake agreement”. It basically means that both parties are interested and working on the details. Yes, it could still fall through, but it’s a lot better than no talks at all. Would LOVE to see FSU come to Pullman!

Even when it is signed it means nothing as teams back out all the time!

2015 likely more feasible for BYU. Many of BYU’s 2014 opponents have had success turn south since scheduling, they are surely looking for a bigger AQ name than WSU to complete 2014.

This is simply an example of an AD trying to create excitement around his brand. The reality is that they pushed the BYU game back from 2013 to 2019 so they are trying to become bowl eligible 1st and then try and build up to a tougher schedule.

Toilet bowl eligible is their best bet. Getting good non PAC12 teams in Pullman is nearly impossible. Pullman is 3 hours from nowhere.

This from “Nampa native”? ROFL.

@JST –
It is hard to disagree with that logic. I can see why teams in the Pac 12 like Utah and Washington State have dropped BYU in an attempt to get bowl eligible. If you don’t get to a bowl, coaches get fired and fan bases get angry.

CJcoug,
Not true. In fact the exact opposite. BYU wanted this game badly in 2014. Leach asked to push it back a few years. BYU wants to still play in Pullman so they agreed to 2019.
If BYU refused to return the Home and Home, why are they playing in 2019?
Is it a one and done road game that BYU signed. But they are refusing to play a return game in a home and home series?/?

We want the pirate to come back and play TTU. That would be a sell out at both stadiums…..

Get Texas Tech on the schedule, Leach vs Kingsbury

Lots of speculation in our parts that Rutgers is one of the teams, with us traveling to Washington in ’14.

I think this was announced today.

Rutgers is about as exciting as lukewarm oatmeal!

WAZZU and Boise State should mix it up more often. It is a natural geographic rivalry, and a bit more compelling nowadays than BSU VS. Idaho. Admittedly BSU VS. WSU would not generate much national interest as the elite of the Mountain West against a Pac-12 doormat, but they are two of the top 5 college teams in the Pacific Northwest, along with Washington, Oregon, and Oregon State. They should play each other more often.

WSU would be my last choice for Boise. They are perennial PAC12 doormats, have no national following and never sell out their 35,000 stadium. 2 games every 10 years is enough for me.

Don’t want to lose to the Cougs again there buddy?