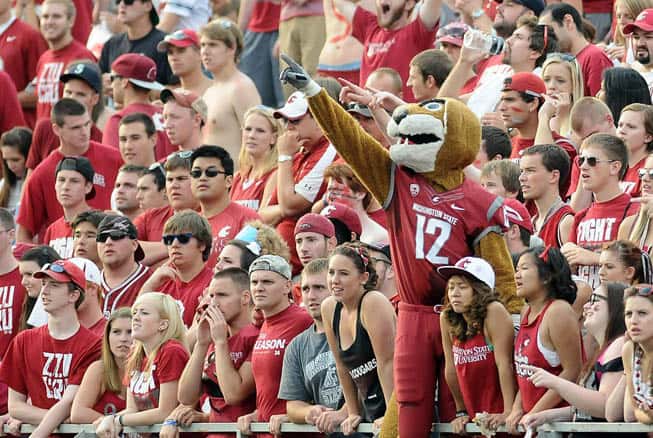 “We revived the series last year after more than 100 years and look forward to scheduling additional contests in the future,” said Moos. “This is a game that is of great interest to fans throughout the Pacific Northwest, particularly in eastern Washington.”

Washington State now has two of their three non-conference games scheduled for the 2016 season. WSU is also slated to travel to Boise State on Sept. 10.

Eastern Washington is a member of the Big Sky Conference in the FCS. The Eagles travel to Toledo and Oregon State in 2013, Washington in 2014, and Oregon in 2015.

WSU’s Bill Moos has been busy with football scheduling of late. Two weeks ago, he announced a 2014-15 home-and-home series vs. Rutgers along with the postponement of a series with Wisconsin to 2022 and 2023.

Moos also said in May that he has handshake agreements with five BCS schools for home-and-home football series.

Way to push yourselves and excite your fans, Washington State.

Actually, from a regional standpoint, it does. We’re playing in Boise the next week anyway, what’s the big deal?

Worry about your own team, if you even have one.

Well said Brock as sad to already be lining up an D1AA opponent for a game in 2016 when you don’t even know how that will penalize you in the strength of schedule component. Really selling your fan base short as lots of time to schedule an FBS game.

Oh great, another scheduling “expert”………….Were we supposed to win the Pac 12 or something?

Hey whatever happened to the Big 10:4 and that neat little scheduling deal we were supposed to have? Conveniently they go and grab Rutgers and Maryland so they can blame it on expansion.

Would any of you three care to comment on them? (Crickets)

I don’t think it hurts Wazzu to schedule Boise State, EWU or Idaho regularly as part of their OOC schedule. Eastern might not be moving up to FBS status anytime soon, but they have some status having won an FCS National Championship recently, and having sent a couple players to the NFL. Nobody on the east coast is going to mistake WSU for Alabama, so it makes sense for them to generate as much regional interest as they can.

Yeah but it doesnt make sense for Boise to schedule WSU very often.

This is a great series. I bet both of these games will be decided by one score and that EWU wins one.