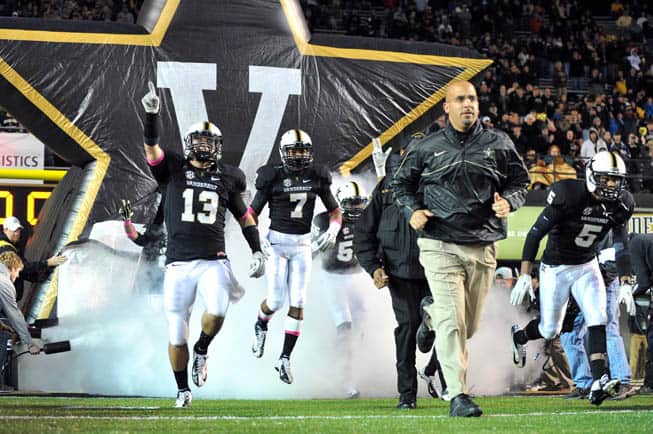 The Vanderbilt Commodores and the Western Kentucky Hilltoppers have scheduled a three-game football series, both schools announced this morning.

Vanderbilt will host Western Kentucky at Vanderbilt Stadium in Nashville on Sept. 12, 2015 and again on Nov. 4, 2017. The Commodores will travel to face the Hilltoppers at Houchens Industries-L.T. Smith Stadium in Bowling Green on Sept. 24, 2016.

“This series is a good idea for several reasons,” Vanderbilt Director of Athletics David Williams said. “We are already playing several other nearby institutions and Western is only an hour up the road for the fan bases of both schools. And in this era of escalating travel costs and game expenses, it makes sense to stay at or near home when the opportunity arises.”

“We are very excited to be adding Vanderbilt as a future football opponent,” said WKU Director of Athletics Todd Stewart. “Our game in 2016 will mark the first ever football appearance by a member of the SEC on our campus, and it will be a great day for our university, fans and community. The away games also present a great opportunity for our fans, students and over 7,000 alumni in Nashville to support WKU football on the road.”

Barring any changes, Vanderbilt has now completed their 2015 non-conference schedule. Vandy is also slated to host Richmond and travel to Middle Tennessee and Wake Forest.

In 2016, the Commodores also host Middle Tennessee and travel to Georgia Tech, while in 2017 they travel to MTSU again.

Western Kentucky has also tentatively completed their 2015 non-conference schedule, which also includes Miami (OH) at home and Indiana and LSU on the road.

It’d be nice if Vandy could play some of the other regional schools like Memphis, Louisville, and UAB.

they need a guarenteed win or as close as you can come to one.

They play UAB this season.

Nampa you can bash the other SEC schools but leave Vandy out of it. They play Wake every year and often play Duke, Northwestern, UConn. Ga Tech etc. Vandy is not Alabama or Florida but they schedule other BCS schools. It may not be USC or Texas but come on….

telling the truth is not bashing. They are the little brother to the SEC big boys. They do not have the fan base or the money to support such a big time program as a Florida or Alabama. What they do have going is a far superior university education and those whose graduate will on average earn far more money over their careers than the public school graduates. They are basically the Northwestern of the SEC.

Yes and they play Northwestern, Duke, Wake, Ga Tech etc. All you do is BASH the SEC and really everyone else. You really give it to Boise. I have yest to see one positive post from you. Sorry but that is the “truth”.

by the way Vandy does have the money not only do they get the same cut as Auburn, Florida and Alabama (this is not the Big 12) they get more donations than most other SEC schools.

What do all those schools have in common? The only way you will ever get into any of them is by donating your corpse to their Pathology Department.