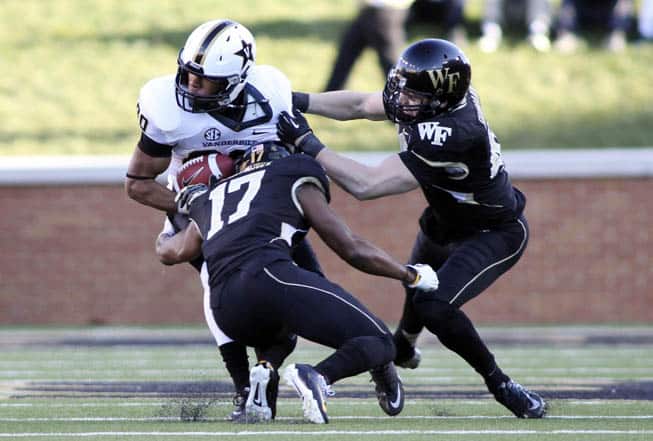 Yesterday when the 2014 SEC Football Schedule was released, one team was missing from Vanderbilt’s slate — Wake Forest.

Vanderbilt and Wake Forest were in the middle of a long-term contract that had the two schools meeting annually to close out the regular season. In 2014, they were scheduled to meet on Nov. 29.

But in an effort to have more rivalry games at the end of the season, the SEC moved Vanderbilt’s contest against Tennessee to the final week. In turn, Wake Forest was bumped from Vandy’s 2014 schedule.

According to The Tennessean, Vanderbilt and Wake Forest have canceled the remainder of their contract which includes the 2015 game in Winston-Salem.

Vanderbilt director of athletics David Williams told the paper that he intends to explore the option of a new agreement to play the Demon Deacons in 2015, but it may not happen.

Wake Forest likely wasn’t offended by the SEC throwing a wrench into their 2014 football schedule. The Deacons were already in a pinch because they were given a trip to Notre Dame next season even though they already had four other non-conference games scheduled (Army, NIU, ULM, Vandy).

The final game of the contract between Vandy and Wake will be played this season on Nov. 30 in Nashville.

Bummer. Wake vs Vandy had a great chance to turn into an awesome rivalry due to their similarities. Not only are both great academically, but they’re both bottom feeders of their respective conferences, have random & unexpected flashes of brilliance, and even share the same colors (Wake’s unis are better, but ‘Anchor Down’ is cooler than ‘Wake the Demons’ IMHO). Sad this isn’t continuing, but I hope the schools can work something out for the future.

I thought that was the basketball schedule.

Exactly.. Joe 12-Pack is spot on… what kind of non-conference schedule is that??

2014.. if Vandy can’t go 8-4 or 9-3 w/ that schedule, they don’t deserve the praise they are getting. Vandy has the easiest non-SEC schedule and fortunately always plays a possible victory against Ole Miss….leaving west division powerhouses Bama, Auburn, LSU, Texas A&M to play us once every other year. If Vandy wants to move to next level and get a better post season game they have to 1) either schedule a better nonconference game or go 5-3 or better in conference.

If they want a better bowl game, they need to sell out their stadium for home games.

How did these schools end up playing each other end-of-season? Was it always an arranged ACC-SEC marriage now replaced by Louisville-Kentucky?