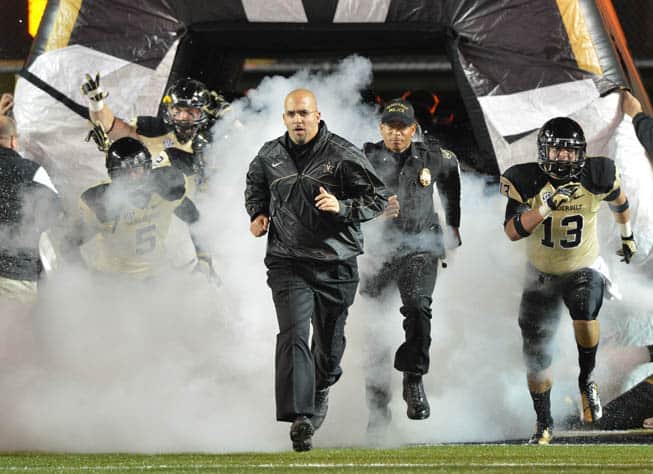 All four of Vanderbilt’s non-conference games will be played at Vanderbilt Stadium in Nashville. The 2014 season kicks off on Saturday, Aug. 30 with a visit from the Temple Owls of the American Athletic Conference.

Vanderbilt hosts UMass on Oct. 4, which is the third game in a four-game, home-and-home series that was agreed to back in 2011. The series is set to wrap up at Gillette Stadium in Foxborough on Sept. 8, 2018.

Old Dominion is the third non-conference game for the Commodores in 2014. The Monarchs, who visit on Nov. 1, will officially be a member of Conference USA next summer.

Vanderbilt closes the 2014 season on Nov. 29 against Wake Forest.

The 2014 SEC football schedule has yet to be released, but the Commodores know seven of their eight opponents. Vanderbilt will host Florida, South Carolina, and Tennessee and will travel to face Georgia, Missouri, Kentucky, and Ole Miss.

Looks twice as difficult as the typical Alabama non-conference schedule.

What a crock. I was a loyal vandy football fan and sat in the same seats for 26 years. However since the powers that be saw fit to take my seats away and make them prime searing and the only way I could keep them was to pay more as well as make a donation to the school, I told Vandy to keep their tickets . I will never again attend a Vandy game and I was hoping they would lose every game this year. Well there is still hope they will lose mightily in 2014. When Franklin gets hired away to another school for a lot more money I have full confidence that Vandy will return to their standard of losing. I certainly hope so!!!!!!!!!!!!!!!!!!!!! Since David Climer seems to hate UT and is enthralled with Vandy so much maybe they will hire him as the next Vandy coach.