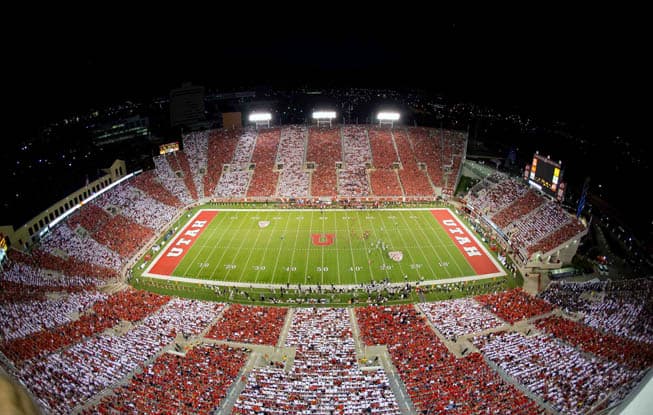 The Utah Utes and the San Jose State Spartans have scheduled a home-and-home football series for 2016 and 2017, Utah’s official website indicates.

Utah will travel to face San Jose State at Spartan Stadium on Sept. 17, 2016. The Utes will then host the Spartans at Rice-Eccles Stadium in Salt Lake City on Sept. 16, 2017.

The Utes open the 2017 season at home vs. North Dakota on Aug. 31, then travel to BYU on Sept. 9 before returning home to face San Jose State on Sept. 16.

SJSU’s non-conference slate in 2017 currently features home games vs. Colorado on Sept. 23 and Iowa State on a date TBA, and road games at Utah on Sept. 16 and BYU on Oct. 28.

I like this matchup, I am hoping we can pick up more games like this against this type of opponent (struggling BCS programs) and get them to come to Spartan Stadium. I realize we will never get home games with USC, Oregon, UCLA, etc. But if we can pick up games against Colorado & Utah. Any doormat teams in big conferences that can’t win in their conferences and don’t make bowl games so they are looking for success outside of conference. Don’t sleep on SJSU! Go Spartans!

LOL at BYU fan ‘ED’ pretending to be a SJSU fan. I love reading the comments by gutless BYU fans pretending to be fans of other schools to run smack because they can’t run smack as a BYU fan after watching Utah violate BYU’s every orifice year after year; 4 times in a row and 9 times out of the last 12, to be exact. Keep e-stalking Utah articles and running surrogate smack because I get a kick out of the creative ways you vent your extreme jealousy and PAC-12 envy.

Glad to see both BYU and Utah as well as Iowa St come to SJSU. Just hope the crowds come as well….