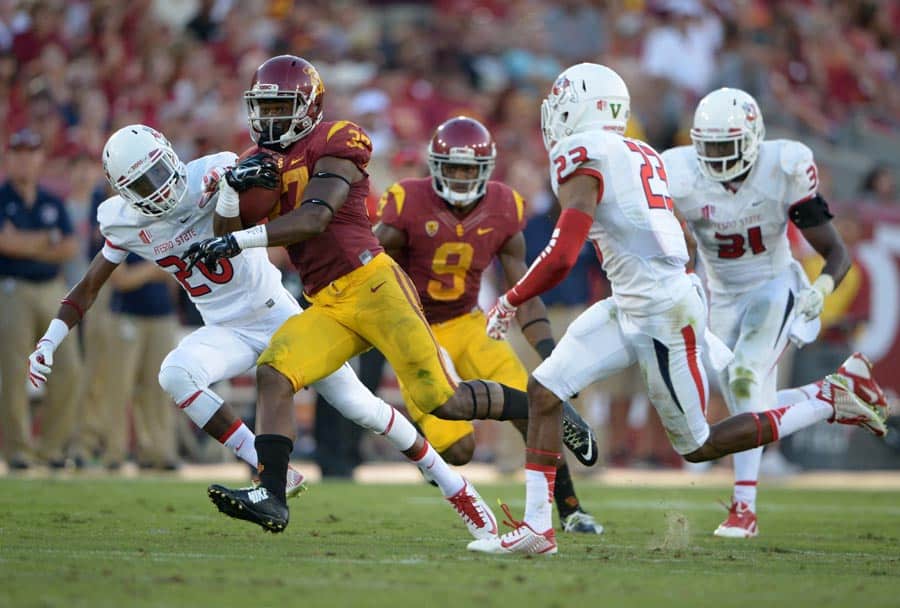 The USC Trojans and the Fresno State Bulldogs have scheduled a three-game football series, both schools announced on Friday.

USC also announced on Friday that they have moved up a non-conference home game against the UNLV Rebels. The game, previously set for Aug. 31, 2019, will now be played on Sept. 1, 2018.

What the hell has happened to Fresno scheduling? They have a big enough stadium, with decent fan support. Why can’t they get any big opponents to play in Fresno anymore? This feels like it should have been a 2-for-1 deal. USC wouldn’t have to travel far to Fresno, plus they get two home games. Crazy.

Fresno basically just cut the same deal for themselves that UC Davis could have made with USC.

Discouraging. The have not couldn’t even get a 4 for 1? 3 for none is awful.

That 2005 game is one of my all-time favorites

I’m guessing Fresno isn’t making much off home games anymore, so they need buy games to make money. They have one scheduled each of the next 8 seasons and they’ve all been scheduled recently.

Fresno makes more money riding the bus to Los Angeles than they can make at home, averaging 30,000 per game with over 11,000 empty seats. The Fresno glory days are behind with no sign that they will return. The new slogan should be, “Any check, any where-I’m losing my ass and need the money.”

But that game would be a guaranteed sellout if they brought USC to town, even if USC fans made up the remainder of the tickets. Plus you could charge more.

A shame they couldn’t get a home game out of that. Sad state for the FSU football team.

I’d love to see an NCAA rule limiting teams to 7 home games, (and only 6 home games if a neutral game is played). P5 home game scheduling is out of control.

No kidding. Notre Dame plays only three true road games this year. It’s absolutely absurd that the NCAA allows that.

Kinda odd. If FS is a good enough opponent to schedule at all, you’d think they could cut a 2-1 deal. What next? USC v Iowa Little Sisters of the Poor? Anything for a paying date with little chance of a loss? Not good.