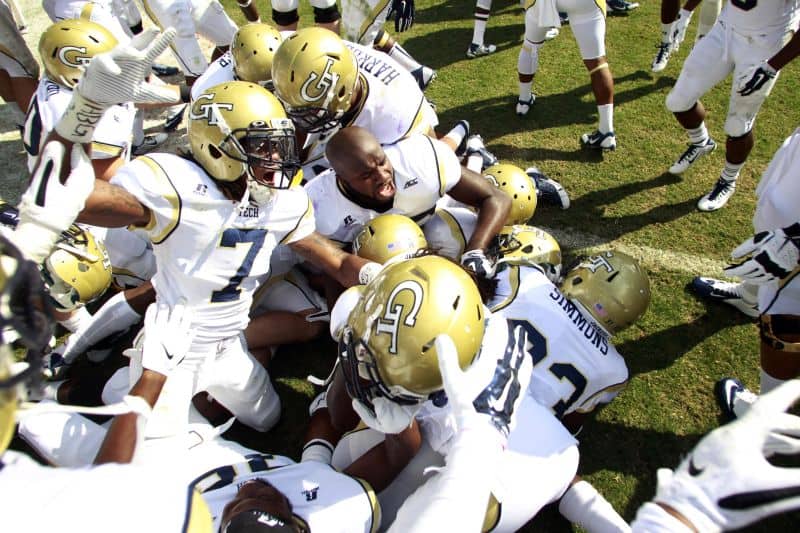 Georgia Tech is one of three teams on the outside looking in at the AP Top 25. (Peter Casey-USA TODAY Sports)

After five weeks, only 17 of the 128 FBS teams are undefeated; of these, only three remain locked out of the rankings.

And while you might expect to see a MAC team or a Sun Belt member at 4-0 and not yet ranked, what would you think if we told you that two of the three teams hail from power conferences?

Whether the justification for the omission is a weak opening schedule or a string of unconvincing victories, the three teams listed below will have to do something dramatic to draw the attention of voters.

The Yellow Jackets are one of only two ACC teams without a loss this season; the other is 4-0 Florida State, still at No. 1.

Georgia Tech’s first three victories were less than notable: A 38-19 win over FCS Wofford in the opener, a 38-21 win over Tulane in Week 2 and a narrow 42-38 victory over Georgia Southern in Week 3.

Things changed in Week 4 when the Yellow Jackets knocked off Virginia Tech 27-24 in Blacksburg on a last-second field goal. It was their first win over the Hokies since 2009 and their first win in Lane Stadium since 2006.

Though the win wasn’t enough to get Georgia Tech into the AP Top 25 (where it hasn’t been ranked since the end of the 2011 season), it did earn it its first mention in 2014—22 points—making it technically the No. 33 team in the nation.

After taking Week 5 off, the Yellow Jackets climbed to the No. 31 spot in the latest AP with 37 points.

The Yellow Jackets welcome Miami (Fla.) to Atlanta this Saturday, and even though the Hurricanes are 3-2, a win ought to be enough to launch Georgia Tech into the rankings. If not, the next huge game is a Nov. 15 home date with Clemson.

Marshall is a name you would expect to see on this sort of list, a Conference USA member that has played well but will need more firepower to move into the polls.

Marshall’s remaining schedule means that the Herd will likely have to hit nine or ten wins—or have a bunch of ranked teams lose—to jump into the actual rankings. Here’s what’s on tap for the Herd: Old Dominion, Middle Tennessee, Florida International, Florida Atlantic, Southern Miss, Rice, UAB and Western Kentucky.

Marshall hasn’t been ranked in the AP poll since the beginning of the 2002 season.

The shocker from out west, Arizona is one of three undefeated Pac-12 teams, but the only one not ranked in the Top 25.

Despite all this, Arizona is an undefeated team from a power-five conference, a program that earned only 43 points in this week’s AP, making it No. 29.

While Marshall received some preseason praise in the polls, the Wildcats didn’t garner any voter interest until Week 2 when it pulled four points for the No. 44 rank.

Compare Arizona’s situation to that of No. 16 Stanford, a 3-1 team which did lose impressively 13-10 to No. 14 USC in Week 2, but other than that blew out FCS UC Davis in the opener and scored wins over 1-3 Army and 4-1 Washington.

Arizona has a better—and more difficult—opportunity to make its case than any other undefeated, unranked team: Its clash this Thursday night at No. 2 Oregon on ESPN.

All three teams now sitting at 5-0!! Feel bad for Marshall though, they can go 13-0 and blow out all their opponents this season and still not make the playoffs… unless lighting strikes on all the major teams by their respected conferences beating themselves up.