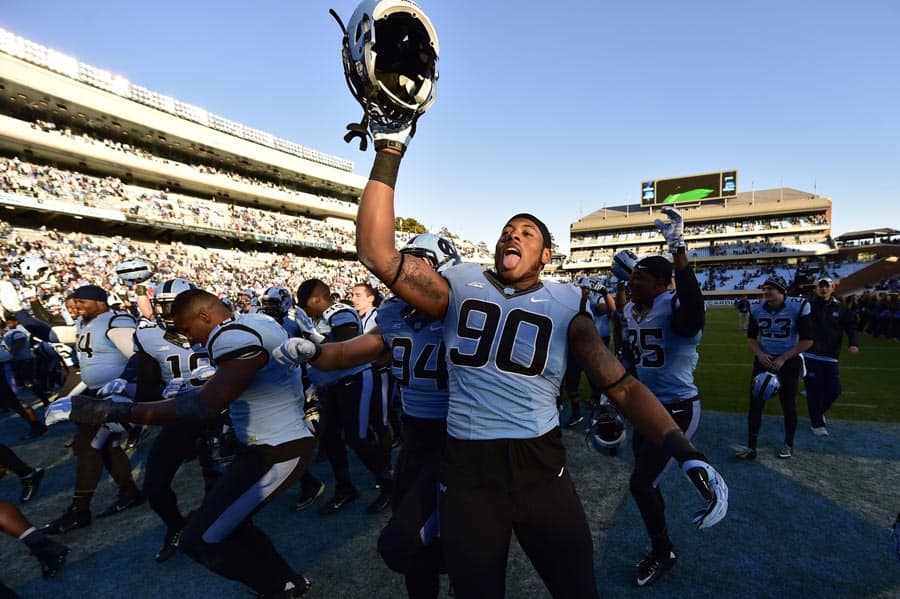 The North Carolina Tar Heels have completed their 2016 and 2017 non-conference football schedules, the school announced on Wednesday.

North Carolina is set to open the 2016 season against Georgia in the Chick-fil-A Kickoff Game at the Georgia Dome in Atlanta on Sept. 3. The following week on Sept. 10, UNC hits the road again to face Illinois.

UNC’s final two non-conference games of the 2016 season are both home contests against FCS teams. The Tar Heels will host James Madison on Sept. 17 and The Citadel on Nov. 19. Without a waiver from the NCAA, only one win over an FCS team per season counts towards bowl eligibility.

In ACC play in 2016, the Tar Heels are slated to host Georgia Tech, Pittsburgh, Virginia Tech, and NC State and travel to Duke, Miami (FL), Virginia, and Florida State.

North Carolina opens the 2017 season at home vs. California at Kenan Memorial Stadium in Chapel Hill on Sept. 2. That game is the first of a home-and-home series that concludes in 2018 in Berkeley.

On Sept. 16, 2017, UNC travels to take on the Old Dominion Monarchs. That game is also part of home-and-home series that concludes in Chapel Hill in 2020.

North Carolina’s final two non-conference games are both at home. UNC plays host to Notre Dame on Oct. 7 and Western Carolina on Nov. 18.

UNC’s ACC games in 2017 include Duke, Miami (FL), Virginia, and Louisville at home and Georgia Tech, Pittsburgh, Virginia Tech, and NC State on the road.

Very impressive schedule IMO. I love the matchup vs South Carolina this year and will be excited to see them play Georgia the following year. Being an ACC fan I will be pulling for Nc but until they improve their defense these will be very tough wins. Offense is legit, they scored 35 points last year on my Tigers, who had the #1 ranked defense overall last season. I think their offense is good but still don’t expect a win over Spurrier but man I would love to hear his press conference if they did end up losing. Go Tarheels..

Georgia & Illinois is nice. JMU and The Citadel, not so nice

2 FCS schools in a yr and back to back years is “impressive IMO”. You must ne Special Ed Con fan wanting liking that the ACC has broken the tie of who plays the most fCS schools. Both conf have every team playing one and now ACC will have more.

Absolutely love the matchup against California. I live in California but have grown up a die hard Clemson tiger fan and pull for the ACC. They get the least respect of any P5 yet should deserve much more and have proven that, yet they continuously get overlooked. These are the types of matchups I have been waiting for. ACC/SEC vs Pac12. You guys do know the SEC & Pac12 haven’t played in a regular season game or bowl game in many many years, other than being forced to in National Cahnpionship which Oregon did lose once again. Why? Because they want it to be east vs west. They want it to seem like the caliber of football played is equal across the board. And how do u keep that thought in place? You don’t allow what are the so called best conferences to play against each other, not even in a bowl. So if anyone has a answer for me, I’d love to hear why they haven’t played against each other in a bowl. If they r the two best conferences… A joke. We will find out this year when the Pac12s beat plays a middle class school from sec in Texas A&M..

Ok, Elephant in the room: 2016 will make the 2nd consecutive year that UNC has TWO FCS schools scheduled. Using Mr. Kelley’s database, I’ve found 13 schools that currently have open dates on the same dates as the two FCS games on UNC’s schedule. Add to that, they’ve scheduled Wake Forest as a non-conference game in 2019. What’s going on in Chapel Hill? Are they just getting lazy? I’m perfectly willing to allow you one FCS game. But a P5 school scheduling two in two consecutive years? Am I out of line thinking that’s ridiculous?

Agreed, they should’ve taken on a school from the MAC, AAC, or SBC team instead even if it’s a 1-off.

The AD knows they are going to continue to be mediocre or worse. Instead of being smart ans scheduling 1 P5, 2 mid majors and FCS..(i hate FCS period) he scheduled 2 P5’s and 2 FCS

Just curious bc I haven’t looked it up, but when was that schedule completed? That’s what most teams have done, is scedule 2 FCS teams. Which I think is fine. I will like it more when they don’t but all some people seem to look at is that. “Soup” ur one of them, don’t see you talk about much else. Instead look at the quality opponents they do schedule. And once again some of those FCS teams r as good as if not better than some teams from smaller D1 conferences. But then again I wouldn’t expect some people to be able to differentiate btw the level of play btw the two. So once again repeat yourself and bring nothing but complaining to the conversation. First time I’ve seen ur posts in months and I’m already tired of you. Shit gets old. Only idiots complain when South Carolina plays UNC & Clemson OOC while being in the SEC.

Get a life UNC. You should be ashamed to play 2 FCS schools in any season, even worse to do it back to back years

Do people not realize that Old Dominion is now a member of the CUSA? They’ve been at the FBS level for 3 years now.

People are referring to the fact that UNC plays two FCS teams in 2015 and 2016. ODU is not one of those.

I think it’s a good idea to give these smaller fcs schools a chance to be noticed and a chance to pull off a Cinderella upset like I think personally that citadel might have a slight chance at unc because of how they fared against FSU in recent seasons.

I agree–scheduling 2 FCS schools in a year does not show confidence in the future of Tar Heel football. I like UNC scheduling big-boy teams. Sorry, I won’t pay to see UNC play the likes of The Citadel, Western Carolina, OD and James Madison.

Here is a simple solution, ACC goes to 9 conference games each year. Scheduling 4 non-conference games each year is always going to be a challenge. And it’s crazy, with 14 conference teams, that each team only plays 2 games against the opposing division. UNC will always play NC State as one of those two, thus they can only play 1 team out of the other 6 each year. UNC will continue to have an up hill battle with their strength of schedule as long as this continues. If that team is FSU or Clemson, they have a chance, but any other team will hurt. As far as scheduling 2 FCS teams, I don’t see much difference between a quality FCS team (such as Deleware or Citadel) and a weak FBS team from the American or MAC. Again, the simple solution would be to replace an FCS match-up with a 9th conference game. Forcing UNC and WF to schedule each other as a non-conference match-up makes no sense. With our schedule, this year or next, allows for no margin for error. Losing to SC put us in a hole that took winning 11 straight before cracking the top 10. If we want to make a run next year, we will have to beat Georgia (and hope they do not have a down year). I am proud of my Tar Heels despite not being able to beat a team from SC. So here is a message to Fedora, start winning the recruiting battle and you will start winning these games!! It is insane how many players from NC are on SC and Clemson’s roster. We have done well with skilled positions, but need more talent on the defensive side of the ball. More athletes. Hopefully this season helps change that trend. Go Heels!

A nine game conference schedule doesn’t work for the entire ACC. They discuss it every year and it just doesn’t work for a number of reason. It does for the Big 12 and Pac 12 and the B1G wants it. There are four ACC schools (Clemson, FSU, GT, and Louisville) who play SEC opponents EVERY year, and the conference also has ~5 games each year against ND. These nine mandated games would make the additional nine conference games too restrictive.

I’m not sure why it is important honestly. In 2015, the ACC played MORE (21) P5 games in the OOC schedule than anyone else. The B1G played 17 (with an 8 game league schedule)…no one else played more than 11. Like the SEC and Big 12, the ACC plays too many FCS games, but I’ve never understood why anyone cares…who is getting hurt here. Note that the ACC isn’t dodging anyone…the league played more (133, 9.5 per school) P5 games in 2015 than any other league. The B1G was second with 129. The Big 12 only played seven opponents from P5 conferences in their OOC schedule and two of those were Texas.

I think the nine game conference schedule would work for SOME of the ACC. UNC, for example, would be fine with incorporating those nine games with the way it normally schedules and it would likely help prevent these seasons with two FCS games, but Clemson, FSU, GT, and Louisville would not like it. It would also KILL any chance the ACC has of ever attracting ND as a fulltime member.

Ignorant troll schoup do some research. I know that is a big word look it up.
The ohio state and Tennessee both backed out of commitments made to unc for home and home deals. Hence the schedule you are not happy about. Not the AD fault. Might want to go up on that Prozac dose prior to your research

The citadel beat South Carolina this year and went to FCS playoffs, and JMU is a consistant good team. Both of these teams could play and win in group of 5. These will be competitive contests

UNC was one of only 28 schools to play ten P5 opponents in 2015. They will do it again in 2016. The two FCS opponents thing in both years is all folks want to talk about….and I get that. There won’t be more than a dozen or schools who have scheduled ten in both seasons though. At the same time, UNC will have four wins over FCS opponents which will be two or three more than most schools. Analyze it how you want it. There are good reasons that we got stuck with the 2nd FCS game in 2015.