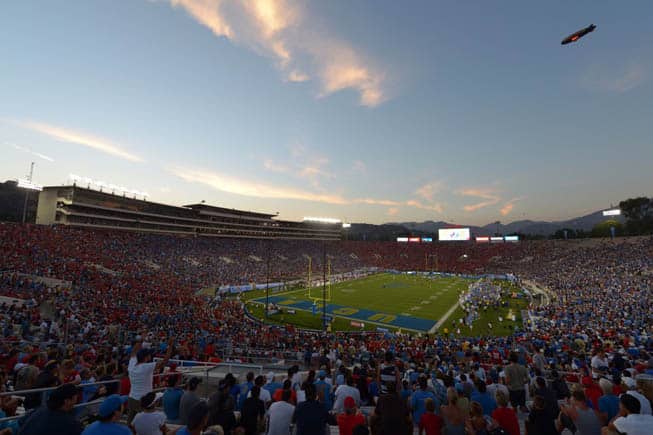 The UCLA Bruins have added the Fresno State Bulldogs to their 2018 football schedule, both schools officially announced this afternoon.

UCLA will host Fresno State at the Rose Bowl in Pasadena on Sept. 15, 2018. The two schools have never played in Fresno.

“We expect that this announcement will be well received,” Fresno State Director of Athletics Thomas Boeh a said. “Contracting this game with UCLA reflects our continued commitment to maintain a non-conference schedule that is balanced, while including competition with the nation’s elite programs.”

The addition of Fresno State gives the UCLA Bruins two non-conference games for the 2018 season. UCLA is also scheduled to play at Oklahoma on Sept. 8.

Fresno State now has three non-conference games scheduled for the 2018 season. The Bulldogs open the season at home vs. Idaho on Sept. 1 and later welcome Toledo to Bulldog Stadium on Sept. 29.

UCLA needs to travel to Fresno….

Why not They a;ready have games at UNLV, Nevada and Memphis scheduled. Fresno could give the same kind of guarantee those schools are paying.