UAB Football to Return for 2017 Season 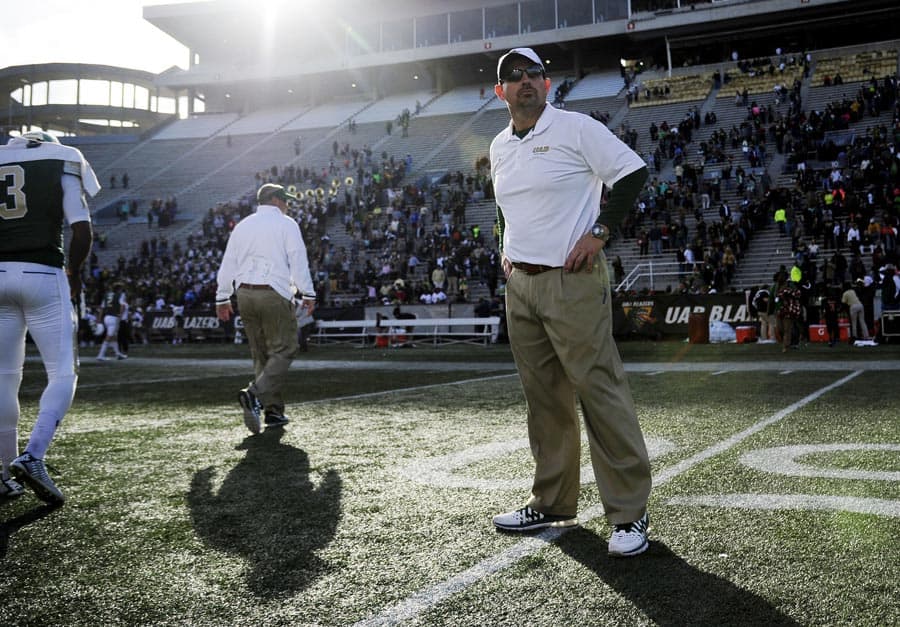 The UAB Blazers football program will return for the 2017 season, the school announced today.

UAB will remain a member of Conference USA and will have full FBS status in 2017. In addition, the Blazers will be eligible in 2017 to compete for the conference championship and a postseason bowl game.

“I am so excited that UAB Football will return to FBS competition in 2017,” head football coach Bill Clark said. “Like our fans, I wanted to light the scoreboard much sooner, but doing it right is more important than doing it fast, and this was our best option. We want a program that is here to stay. We have to start by building a new, stronger foundation. We need to take our time to do it right, then we can compete for conference and bowl championships.”

UAB’s football program was shut down in December. Conference USA was not severely affected in 2015 as new member Charlotte slotted into UAB’s position. However, UAB did have to cancel eight future non-conference games.

Last month, UAB President Ray L. Watts announced that football would be reinstated, but an exact season was not known until today.

UAB also announced today they plan to resume rifle competition in 2015-16 and bowling in 2016.

Jon Solomon noted that its uncertain when they’d resume a C-USA schedule. My own wag is 2018. I think 2017 they’ll play the minimum 6 FBS schools to keep that level. It’ll be interesting to see how they build that 2017 schedule. They should give UMass a call.

Its going to be a serious challenge to have 76 full counter scholarship average for 2017 and 2018. Recruiting will only bring it to 50 in 2017 and 75 in 2018 assuming zero attrition. I’m sure they’ll manage to give some walk on players scholarships to add maybe half a dozen) more counters, and they might even get a couple hold overs who stayed at UAB from the 2015 team (not many, since Freshmen in 2014 would be Seniors in 2017). I suspect they’ll also put uniforms on some Basketball and Baseball players, but not let them take the field, to get a few more counters on the roster. I think they’ll still be shy of 76 average, but I also think the NCAA will just give them a warning, knowing they’ll be OK for numbers by 2019 season. That 2017 team will be very undermanned. The 2018 will still be undermanned, but should have enough depth to at least put up a fight in FBS. 2019 will be their first semi-competitive year. 2020 is when I think Clark will be able to challenge for the C-USA title.

Anyway good for the Blazers, and good luck to them. A lot of work ahead.

They won’t do it, but Bama should schedule them. I’m a Bama fan, by the way.

Conference USA is now setup like the ACC, SEC and The Big Ten. Seven teams on both sides of the division.

Is it known yet what division they will go into?

Not yet. Charlotte is taking their place in the East, so we’ll likely see a shuffle in 2017 or 2018 when UAB plays a full C-USA schedule.

Surely they’ll be joining the western division this time around, right? I mean, it’s not as if they have a SUPER long history with any of their conference opponents, but Southern Miss is the closest they have to a long-term rival with Memphis having left for the AAC. Plus, regionally speaking, it just seems to make more sense to group them with Southern Miss and Louisiana Tech than to force either WKU or MTSU over. Simple geography isn’t always the rule for these kinds of things, but UAB is definitely further west than the other two longitudinal candidates.

Regardless, this goes down as the most idiotic sports story of the season. You cancel the program after going 6-6 (I think), losing all momentum you built last season, only to start all over again three years later. So flipping stupid!! It will take them years to get back to respectability. If only the president had given the school one more season to get funding and donors they could have avoided this altogether

As an Oklahoma State fan I’d like to thank the school president for shutting the football team down and allowing us to pick up your left tackle as we really needed one, and he looks really good!! How ridiculous, they should fire that idiot. …

As an ECU fan, I’d be really happy if the Pirates scheduled a home-away series with UAB. The timing would work out well for the Pirates, they need a less-challenging road game in 2017 and another home game in 2018.

It sounds like Dimwit football – They voted against it right before they voted for it!