UAB Blazers to play at Texas A&M Aggies in 2018 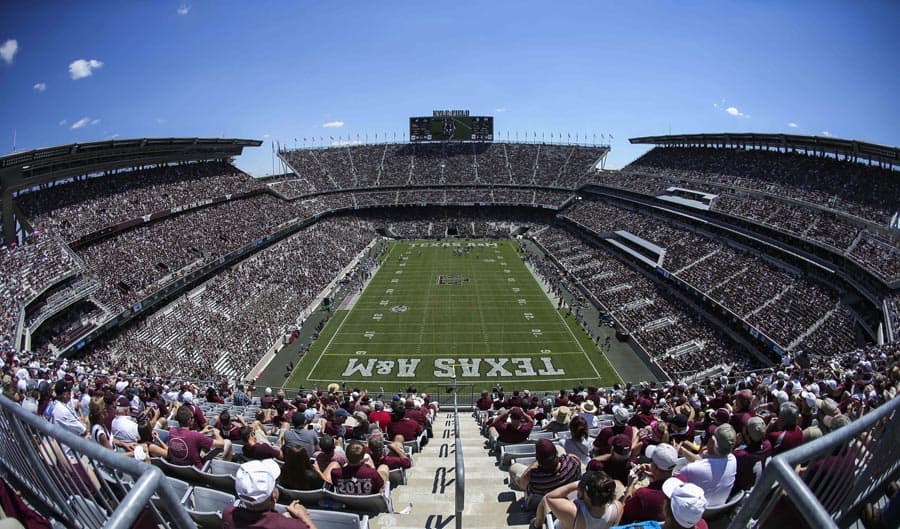 The UAB Blazers will play at the Texas A&M Aggies in 2018, the University of Alabama at Birmingham announced on Monday.

UAB will visit Kyle Field in College Station to take on Texas A&M on Sept. 22, 2018. The game will be only the second meeting between the two schools following a 56-19 win by the Aggies at home in 2009.

“Scheduling games our players and fans can look forward to is another important part of the big picture, and we are excited for the opportunity to play Texas A&M in one of the premier venues in college football” UAB head football coach Bill Clark said.

“We look forward to announcing the full 2018 nonconference schedule and other exciting news soon,” said UAB Director of Athletics Mark Ingram. “UAB Football continues to build on an impressive upward trajectory, and we look forward to sharing the ride with our fans and supporters.”

The Blazers now have two non-conference games scheduled for the 2018 season. UAB also visits Coastal Carolina on Sept. 15, which is the second game of a home-and-home series that begins in Birmingham in 2017.

Texas A&M now has three announced non-conference games in 2018. The Aggies are also scheduled to host Clemson on Sept. 8 and ULM on Nov. 17.

It is very important to have your 3 cupcakes lined up well in advance. Be sure and use that 7th home game as an excuse to avoid the type of games the fans would like.

This is why the SEC was 9-2 in bowl games. Plenty of cupcakes to keep the system flowing.
How did your team and conference do last year?

No. The SEC was 9-2 in Bowl Games by beating the best teams from other conferences.

Since when is Clemson considered a cupcake?

When you are ignorant, you can may all kinds of statements that have no rhyme or reason.

Joe and Crew, take a deep breath please. Let’s try to be honest about what and who the SEC played in 2015-16 bowl games. No doubt Bama beating both Big Ten #1 Michigan State and ACC #1 Clemson is more than impressive on their way to a National Championship, but for the rest of the SEC the stars were aligned correctly. LSU beat Big 12 sixth place Texas Tech, Auburn beat fifth place American finisher Memphis, Mississippi State beat NC State who finished ninth in the ACC, A&M lost to ACC fifth place Louisville, Tennessee beat Northwestern who finished fourth in the Big Ten, the SEC second place team of Florida lost Big Ten’s fourth place finisher Michigan, Ole Miss had the toughest team beyond what Bama saw in beating Big 12 second place finisher Oklahoma State, Georgia beat seventh place Big Ten team Penn State, and Arkansas beat Big 12 eighth place finisher Kansas State. Besides what Alabama and Ole Miss played the SEC played a forgiving lineup, so try not to think too highly of yourself as a conference for what Alabama accomplished. By the way, the SEC non-conference scheduling I still a JOKE!!! Really UAB at A&M?

As a B1G alum living in SEC/Big 12 country I have no problem with TAMU scheduling UAB considering they have the OOC Clemson game, plus the UAB program will be needing the money.

No more a joke than the Big Ten’s OCC scheduling.

And you can make all the excuses you want to make… The SEC was 9-2 in bowl games because they are simply better than the teams in other conferences. Right down the line. Did the SEC win some games they should have won? Yes. They also won games they just as easily could have lost, too.

You can complain about UAB all you want… A&M will still far more pro-level players than most anyone else over the course of the season.

Billy, you say ” but for the rest of the SEC the stars were aligned correctly”. So two years ago when you were bashing the SEC for going 0-5 in the west & the SEC went 7-5 over all, were the stars aligned correctly then as well? My point being is when the SEC does great, you make excuses, when the SEC does bad, you say how over rated they are. How can somebody have it both ways, must be nice living in your world.

I hope the playoff committee will take such scheduling into consideration like that do with the Big 12 and no CCG and UNC playing 2 FCS teams while playing 10 regular season games with P5 teams. To only play 9 games with P5 teams is almost like having an extra bye week, especially when all the non P5 game home games with teams paid to come play.

If you are waiting for ESPN/CBS to bring this up as a issue they are both devoted to the SEC.

ESPN is devoted to money, its a business. If there was not an SEC team in the national championship game, I doubt ESPN would be complaining about it.