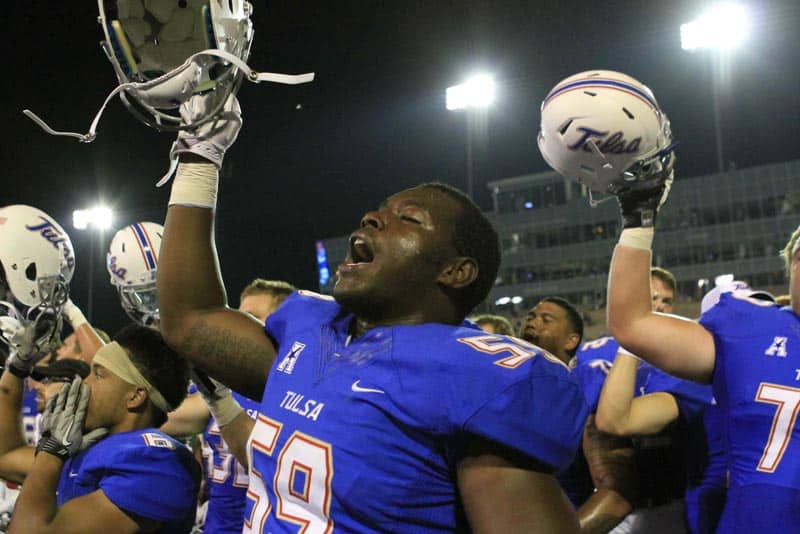 Tulsa is set to open the 2015 season vs. FAU. (Alonzo Adams-USA TODAY Sports)

Tulsa opens the 2015 season at home against the Florida Atlantic Owls on Sept. 5 before hitting the road to take on the New Mexico Lobos on Sept. 12.

After either an open date or a conference game, the Golden Hurricane travel to Norman to face the Oklahoma Sooners on Sept. 26.

Tulsa’s final non-conference game of the season is the most recent addition to their schedule — a visit from the ULM Warhawks on Oct. 10.

The Golden Hurricane are in their first season as members of the American Athletic Conference. In 2015, the AAC adds Navy and will split into East and West Divisions.

Tulsa will compete in the West Division along with Houston, Memphis, Navy, SMU, and Tulane. The East will consist of UCF, Cincinnati, UConn, East Carolina, USF, and Temple.

I would have liked to see a bigger name opponent like ISU or OU coming to Tulsa but at least they made the step up to the AAC instead of getting left behind in the watered down C-USA. The AAC East looks much more top heavy than the West.

All four of ULM’s 2015 OOC games are on the road. So maybe the Warhawks can use the Hawaii Exception and bring Missouri to Monroe in a 2-for-1 deal?

It’ll probably be an FCS team. ULM’s schedule is hard enough in 2015.

I would imagine they’ll bring someone to Monroe, even FCS, because they have to have 5 home games by NCAA rules.

Wish Tulsa would get a long term annual series going with Arkansas, and a few games against Oklahoma and Oklahoma State.

Arkansas will never agree to play at Tulsa. They only want those games in Fayetteville. The in-state schools will at least give TU 2 for 1’s. TU is playing OU again next year in Norman. Then they have a 3 game series against OSU coming in ’17, ’19, & ’20.

I guess you missed this news from the site: https://fbschedules.com/2014/07/oklahoma-state-tulsa-schedule-three-game-football-series/

OSU and OU have recently begun playing Tulsa in 2-for-1 deals. Pay attention to the news before whining.

I am sorry I missed that. I actually caught it afterwards. But by no means was I whining.

That’s 1 less school who Bama could play as they still need to fill 2 spots. They were whining they couldn’t find games a few months ago since then the number of schools who add matching dates has gone for 27 to 10 while they still haven’t booked anyone.

‘Bama won’t play home-and-home deals any more. That’s part of the reason no one wants to schedule them outside of the fact Bama would probably beat them.

It’s not about losing. It’s about home/home. Bama cancelled Mich St home/home for 2016/2017 last year. They used the fake excuse the SEC might go to 9 games, which would not affect anything. Bama is scared to play home/home. their record in true road games is not good thus they avoid i them like a plague. They want the neutral site nonsense which is a virtual home game b/c the other team is traveling mich further thus the crowd is bama dominated. They will only stop the nonsense when their fans get smart enough to realize they are getting ripped off with the dismal 3 cream puff OOC’s

@schoup: I don’t think Bama is scared to play home/n/home series due to being beat, they just came off a home/n/home with Penn St & won both. Now if you go back 10-14 yrs with the series against Oklahoma & UCLA you are correct (not making excuses) but I would consider Bama being much better now then back then. Right now it is beneficial for Bama to play neutral site games, I have no problem with them & have been to about 4 & had a great time. No one is forcing Bama fans to show up for the three OOC games, the fans come because they want to. As in the other teams having to travel much further, you are mistaken about two of them, Bama played, Clemson. Clemson campus is closer to Atlanta then Tuscaloosa. Bama played FSU in Jacksonville & of course FSU is right down the road. I think if Bama fans felt they were getting ripped off then they would not show up for these neutral site games but like you said “bama dominated” crowds so something must be working. I have nothing against home/n/home series but the game has changed & not all stays the same.