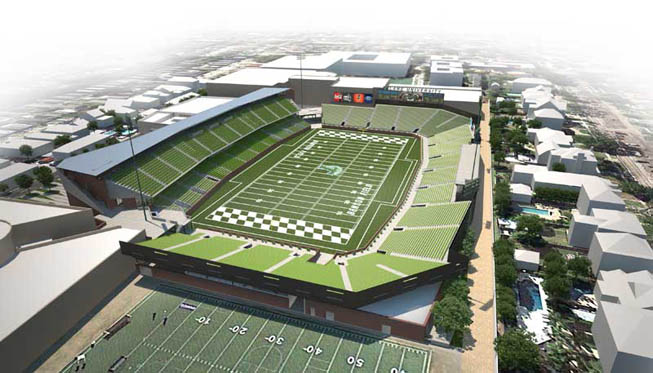 The two teams were scheduled to meet this season in New Orleans on Sept. 6. However, construction on Tulane’s new football facility, Yulman Stadium, is ongoing and may not be completed until around Oct. 1.

Tulane had been mulling their scheduling possibilities, which included pushing back their home opener against Southeastern Louisiana on Aug. 30 and their game vs. Georgia Tech on Sept. 6.

“Our first two games are scheduled home games. I would tell you that that is right in that 7- to 10-day period where we believe we’ll be in there, so we are looking for some flexibility both from those schools but also the conference,” Tulane athletic director Rick Dickson said.

Georgia Tech just announced their 2014 football schedule on Wednesday. Since Tulane was unable to move that game against the Yellow Jackets, they opted out of the entire contract, which also included a game in Sept. 7, 2019 at New Orleans and games in Atlanta on Sept. 12, 2015 and Sept. 8, 2018.

“We are extremely disappointed that Tulane has decided to cancel the four-game series with Georgia Tech, beginning with our game in New Orleans next fall,” Yellow Jacket senior associate athletic director Ryan Bamford said. “The timing of Tulane’s decision (after the ACC schedule was released earlier this week) is especially tough for us.”

“While this news comes very late in the scheduling calendar, we will do everything in our power to get a quality replacement for the upcoming season.”

According to a copy of the contract we obtained last year, Tulane will have to pay Georgia Tech a $300,000 cancellation fee.

Why can’t they just play the game at the Superdome or just cancel the 2014 game, and keep the rest of the games?

Or switch home games and place a G.T. this year. They simply wnted out of this contract.

Playing at Tech in 2014 would give Tulane only 5 home games in their first season in the new stadium. They don’t want that, and not many teams would.

Seems too common. Tulane opted out of a previous series with Georgia. Same AD.

If Tulane can’t have a stadium ready to go on the first weekend, they don’t deserve to have more than 5 home games. What a crappy AD that can’t manage major projects either. A deal could be made with Rice for September 6, who has NMSU on that date. NMSU needs to get out of a game, and that could solve their problem. Having a Rice/Tulane game would be a nice ‘continuation’ of the former C-USA private school competitors.

I would agree. This is bizarre. Why is the Superdome no longer an option? UNO playing there? Or why not move it to Atlanta. The Green Wave wanted out. Schedule must be too tough.

The Georgia Tech-Tulane series is back on. See new article below.