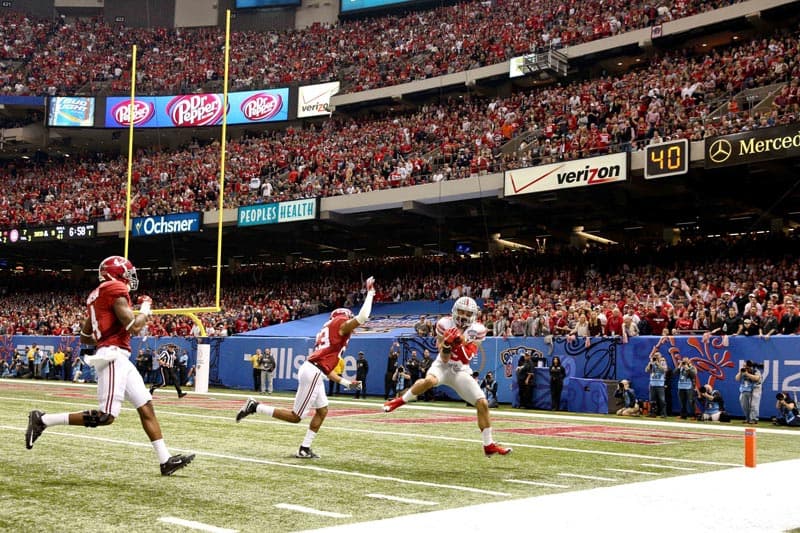 The Sugar Bowl was a hit with fans. (Derick E. Hingle-USA TODAY Sports)

How many people do you think attended the 38 bowl games that were played from Dec. 20 to Jan. 4?

How about 1,663,268? That’s roughly the total number of people that live in the state of Idaho.

On average, it means that 43,770 fans attended each of the 38 contests, but in reality some bowl games were far better attended than others.

What if Bowl A was played in a venue with 100,000 seats vs. Bowl B, hosted by a stadium that seats 30,000? You can only be held responsible for selling the tickets that you have.

To illustrate, the Bahamas Bowl ranks dead last in total attendance this postseason, only 13,997 were on hand to watch Central Michigan’s final-second heroics vs. Western Kentucky. But, the game was played at Thomas Robinson Stadium in Nassau, a facility that seats 15,000. This means that 91% of the seats were filled, a capacity rating that ranks No. 9 among this season’s bowl games.

Compare this to the Orange Bowl, which drew a crowd of 58,211, No. 9 among this year’s bowls and 44,214 more than the Bahamas. This looks pretty good until you throw in that Sun Life Stadium has 76,500 seats, 18,289 which sat empty for the Yellow Jacket’s big win over the Bulldogs. The bottom line is a fill rate of 76%, the 15th worst mark of the bowl campaign.

Take a look at the top ten/bottom ten bowls in total attendance and then look again as we reshuffle the deck by fill rate.

Its tickets sold vs. empty seats. At the end of the day, the winners were games that hosted a local team, a big-time matchup, a playoff game or had a reasonable number of seats to work with.

Note: The capacity for football at Yankee Stadium was initially calculated as 54,251, per Wikipedia plus other stadium reference websites. According to the Boston Globe, capacity for the bowl game was 49,542. The Top 10 of the Fill Rate rankings have been adjusted accordingly with the Pinstripe Bowl taking 6th place.

I watched the Bahamas Bowl. There was no way that the actual attendance was over 90% of the stadium capacity. I would estimate it to have been below 5,000.

Where’s the Pinstripe Bowl with regards to Fill Rate Top 10???

Pinstripe actually came in at No. 6. Article will be updated later tonight.

Various sites list the football capacity as 54,251. However, we just found a quote from the BC A.D. stating it was actually 49,542.

I echo the question about the Pinstripe bowl. The game announcers said it sold out in three days.

These numbers and Percentage fill rates are ALL BOGUS…..those are the number of tickets sold NOT actual asses in the seats! Schools, alumni organizations and booster clubs bought up the tickets and even gave them away for free just to get people to the games. Yeah tickets were sold but the turnstiles showed different numbers. There is now way in hell there was 58,000 at the Orange Bowl!!! Nor even at the Peach Bowl.

They aren’t bogus, they’re real numbers. There’s no count available on how many butts were in seats.

Furthermore, “tickets sold” was stated in the piece.

Maybe YOU should READ the ARTICLE!!!!! It continually states “ATTENDANCE” or the word “ATTENDED”. Now in the English language that means…….ASSES IN THE SEATS!!!

NOT number of tickets sold. There is only a reference to “tickets sold vs. empty seats.” The article then says nothing regarding this topic. The entire inference of the article is ATTENDANCE AT BOWL GAMES.

Furthermore after speaking with friends who attended the Sugar Bowl, they reported that there were a good number of empty seats in the upper level and sporadically throughout the stadium. They said it was not completely filled although I believe TICKETS SOLD, were listed as “sold out”. It was a good crowd to be sure but not 100% filled according to the folks who were there.

And this is exactly as I predicted a decade ago when people were clamoring for a CFB Playoff. Only way to fill the Playoff Bowls is to rotate them to the participant’s home stadium. Thus, making the regular season more important if you do get to the playoff. Top seeds stay home. But then there goes the traditional bowls. In the future you WILL see matchups with a whole lot LESS ATTENDANCE. Maybe some with 100%, too. Say, Alabama vs. Clemson in the Peach Bowl? That would surely be standing room only as cost to attend would be less for fans.

I heard peter Griffin say “Who the Hell Careeeeeeessssssss!!!” lol ….We need a major College Football Playoff, not with 4 teams, but with 32 teams, and maybe another 32 teams for an N.I.T Playoff for those who do not qualify for the Top 32, and a school must have 7 wins to qualify, and eliminate FCS, make everyone either Division 1, and those that can’t upgrade to D1, put them in D2, D3, and add a D4 for the very smallest of schools? ..the sa,e rules should apply for Basketball and all NCAA Sports?

OK, Pinstripe Bowl was Boston College vs. Penn St. NOT Notre Dame. Focus people! Yes, Boston Globe was correct. Not all seats at Yankee Stadium were used due to some being too low for football. That reduced capacity.

Would someone tune in the Hawaii Bowl, the last 3 years, there was hardly anybody in the stands, people are paying and not going? That bowl and the frigid Potato Bowl should be eliminated.Unless it fills air time on a Holiday to entertain people at family gatherings. Only when those two bowls have a home team is the attendance respectable. Remember an Oahu Bowl and a Silicon Valley bowl with hardly anybody in the stands.?

Are you guys going to do this for this year, too? I’m very curious and it’s not easy to find the numbers for the games so far. Thanks

Not sure. The writer who compiled this is taking a break.