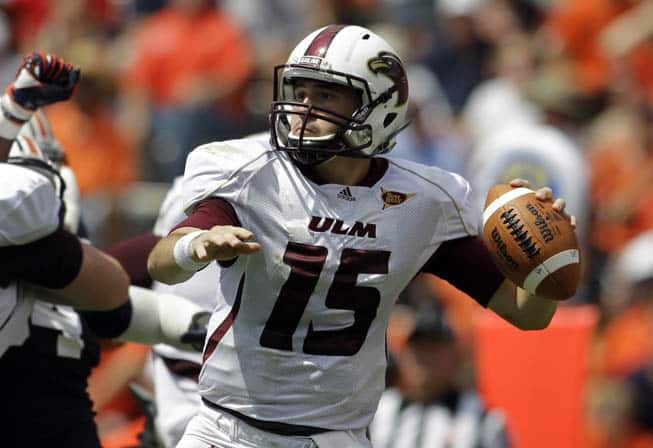 We continue our mission of ranking the non-conference schedules for teams in non-automatic qualifying conferences. Today we tackle a Sun Belt Conference that looks radically different than 2012.

The loss of four teams to Conference USA, along with the additions of Texas State and Georgia State, gives the Sun Belt only eight teams while it awaits the arrivals of Appalachian State, Georgia Southern, Idaho, and New Mexico State in 2014.

For more non-conference schedule rankings, feel free to check out our previous reviews for the SEC, MWC, ACC, American, Big 12, Big Ten and Pac-12. Don’t agree with our rankings? Leave us a reply below.

Former TCU, Alabama, and Texas A&M head coach Dennis Franchione has done a fine job of transitioning Texas State from the Football Championship Subdivision to the WAC, and now into the more stable and ever-growing Sun Belt. His Bobcats are looking at quite a favorable non-conference slate that opens with a trip to Hattiesburg to take on a Southern Miss squad that went 0-12 last season. Texas State has the luxury of hosting the second toughest opponent on this slate, Wyoming, at home on September 28th. The biggest challenge by far for the Bobcats is a trip to Lubbock, TX to face a crazed Texas Tech crowd and Red Raiders offense that finished second in the country with 356 passing yards per game last season.

Arkansas State capped off an impressive 2012 campaign (10-3) by winning the school’s first bowl game since joining the FBS in 1992. Gone is two-time Sun Belt Conference Player of the Year Ryan Aplin at quarterback. His yet-to-be-determined replacement could be aided by a soft schedule that features FBS opponents all finishing below .500 in 2012. If Arkansas State ever had its sights on an SEC upset, its week two trip to a rebuilding Auburn Tiger squad could be its chance. Although Arkansas Stqte must play two SEC teams on the road, they do get SWAC foe Arkansas-Pine Bluff and future Sun Belt member Idaho at Liberty Bank Stadium.

Hot off back-to-back New Orleans Bowl victories, the Ragin’ Cajuns of UL Lafayette are optimistic about another great season – especially with the return of record setting quarterback Terrance Broadway. Although the Ragin’ Cajuns open the 2013 season against an Arkansas team still dealing with the repercussions of the Bobby Petrino scandal and with a trip to take on a Kansas State squad coping with the loss of Heisman finalist Colin Klein, these are still two tough road games to open up the 2013 campaign. UL Lafayette will certainly get some relief the following three weeks when they take on Nicholls State, Akron, and New Mexico State, teams that went a combined 3-32 a year ago.

Recently embattled and scandal-prone head coach Bobby Petrino hopes to rebuild his reputation at Western Kentucky. His Hilltoppers return running back Antonio Andrews whose 3,161 all-purpose yards last season made him the second FBS player in history to go over 3,000 all-purpose yards in a single season. The first player to do so? Barry Sanders. The Petrino era gets rolling with a neutral site matchup against a struggling Kentucky squad that suffered a shocking overtime loss to the Hilltoppers just a year ago. A week two visit to Neyland Stadium could prove to be quite challenging against Tennessee, although the Volunteers did rank 107th nationally on defense a year ago. The final two non-conference games consists of option-obsessed Navy and Army. Thankfully, Western Kentucky was rather sturdy against the run last year clocking in at 34th in the country.

Ranking the #5 and #4 toughest non-conference schedules is probably the most difficult task on this list. Both Western Kentucky and South Alabama play Tennessee, Navy, and an FCS school (although the Hilltoppers do get Navy at home). That left comparing Western Kentucky’s two games versus Kentucky and Army (combined 4-20 in 2012) versus the South Alabama Jaguars’ tussles versus Tulane and Kent State (combined 13-13 in 2012). Ultimately the visit from the Golden Flashes – who were just a MAC Championship win away from playing in a BCS bowl game last year – helped South Alabama secure the #4 slot by the absolute slimmest of margins.

On September 2, 2010, the Georgia State Panthers played their first football game in school history. Just three short years later, they’re already transitioning from the Colonial Athletic Association (FCS) to the Sun Belt. The Panthers schedule is especially intriguing on two fronts: they are the only Sun Belt school to play three non-conference games at home (although all are against FCS squads). Secondly, they’ll play two brutal road games when they travel to Morgantown and Tuscaloosa to take on a Mountaineers offense that was 9th in the nation in scoring in 2012 and a Crimson Tide team looking to repeat as national champions. The last time Georgia State played ‘Bama in 2010, the then Bill Curry-led Panthers suffered a 63-7 defeat.

Troy misses out on the #1 ranking by the width of a hair, and they have the historic letdowns of Duke football to blame. The Trojans kick of the season against UAB (3-9 in 2012) and follow that up against FCS doormat Savannah State. This is the same Savannah State squad that lost 84-0 to Oklahoma State and 55-0 to Florida State last year. Thankfully the contest versus the Seminoles was called early due to inclement weather. After the home openers, things get tremendously tricky for Troy: on the road versus a Mississippi State squad that went bowling last year and beat Troy in Veterans Memorial Stadium; two months later they return to the state of Mississippi to take on an Ole Miss team that’s had the college football world buzzing all summer with their impressive recruiting class. However, although Duke did go bowling last year, three home losses to FCS opponent Richmond going back to 2006 should give the Trojans confidence that they can stand toe-to-toe with the Blue Devils.

The athletic department at ULM didn’t do coach Todd Berry and the Warhawks any favors by forcing his players to open the 2013 season with tough road contests at Oklahoma, Wake Forest, and Baylor. Although ULM does get a bit of a breather in week 2 versus a Grambling State squad that won only a single game last year, the Warhawks don’t even get the luxury of a bye week in September. A tough season opener against perennial Big 12 champion contender Oklahoma is followed two weeks later by a visit to a Wake Forest squad that just barely missed out on a bowl game last season. One week later on September 21st, ULM gets right back on the road to take on an increasingly improving Baylor Bears team that is coming off of three straight winning seasons and bowl appearances. At least the Warhawks can take some solace in knowing their final non-conference contest is against a Tulane club that finished 109th in offense and 114th in defense nationally in 2012 on their way to a sluggish 2-10 season.

Georgia State will lose to one of those FCS teams, if not all 3. Seriously. Ga State is pathetic!

Sounds like another soar Beagle trying to sling mud at GSU again?

They have already beaten south Alabama on the road before. I think they can do a repeat

Seems to me Missouri is a better upset pick for the Red Wolves than Auburn. There is a non-zero chance that ASU could go 2-0 against the SEC.

PeteF3: Great call on Mizzou. It’ll be interesting to see if ASU can swing one of those upsets.

So you’re saying that there is a chance!

Robert: Guess it’s all a personal opinion in terms of how to rank these schedules. If the thinking is that the more FCS schools you have, the worse your schedule is, then I totally hear you. Ultimately my thinking is that a road contest to WV is tough and that no one in the conference has a more difficult non-conference game than Georgia St. going to Alabama. That combo of 3 FCS home dates and 2 FBS road games did make it tough to determine where to place them.

Good catch Brendan. I should have worded it differently. I was trying to convey UL Lafayette’s last three non-conference dates should give them a breather, but clearly those games aren’t consecutive.

how about Umass? Open up @ Wisconsin then go to Kansas St and then host Vanderbilt…0-3 and they may not score a td

MinuteScooter: UMass is actually over in the MAC. I’m working on that article right now as we speak, and I agree with you that their non-conference schedule is brutal.

Are you guys gonna do one for the MAC?

Andy is working on it. Should be done soon.

Thanks for asking about that brandyn. Working on it as we speak!