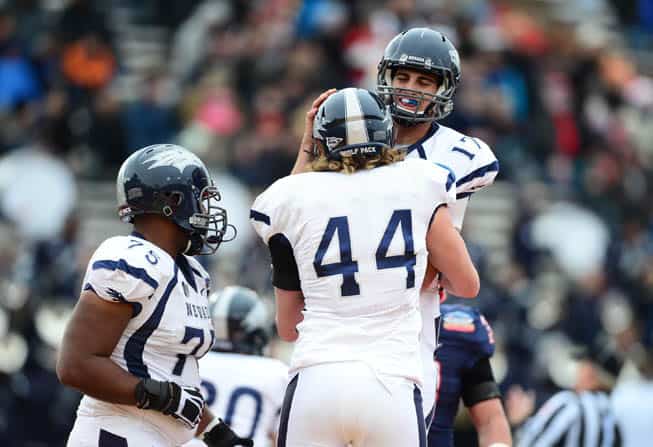 Today is the first installment of ranking the non-conference schedules for teams in the non-automatic qualifying conferences. First up is a review for the newly restructured Mountain West Conference. Also, don’t forget to read our previous rankings for the ACC, American, Big 12, Big Ten and Pac-12.

New Mexico’s 2013 non-conference schedule is about as soft as a warm marshmallow squished inside a s’more. Don’t be fooled by the home opener versus a UTSA squad that went 8-4 last season because the Roadrunners were playing a transitional schedule. There’s nothing frightening about traveling to UTEP, and the rivalry game versus New Mexico State could prove to be nothing more than a scrimmage for former Notre Dame and second-year Lobo coach Bob Davie’s squad. What about that trip to Heinz Field to play Pittsburgh on September 14? The Panthers have quite the reputation of losing early season home games to non-BCS opponents. A 4-0 record in non-conference play is certainly in the cards for this on-the-rise program.

It was tempting to rank Fresno St. #12, but ultimately the home date with Rutgers just narrowly surpasses New Mexico’s trip to Pittsburgh. At least the Scarlet Knights have a reputation of pulling an upset now and again. After the Thursday night season opener, however, there’s nothing here for Bulldog fans to get excited or worried about. After FCS foe Cal Poly comes to town, the combined 2012 records for Colorado and Idaho was 2-22. This soft non-conference schedule is why many are picking QB Derek Carr and the Bulldogs to finish first in the MWC West.

Once again the Vandals of Idaho do a solid job of dragging down the non-conference schedule of a MWC program. If it weren’t for the opening road trip to Memorial Stadium, the Wyoming Cowboys would be giving New Mexico a fair fight for easiest schedule. To be fair, the opener at Lincoln is no joke especially with Nebraska coming off a 10-win season, but the back-to-back dates with Idaho and Northern Colorado gives conference member Boise State a run for its money for weakest home non-conference schedule. One thing to note: second-year FBS school Texas State opened last season with a shocking 30-12 victory at Houston, so the Cowboys would be wise not to sleep on the Bobcats.

This is an interesting case where scheduling a team a few years before playing them isn’t always what you would expect. Although I’m ranking Boise State rather high at #9, they are getting a free pass for scheduling a Southern Mississippi team that was the only FBS school without a win in 2012. When Boise State scheduled this home-and-home series, the Golden Eagles were on their way to winning Conference USA and the Hawai’i Bowl. But the loss of head coach Larry Fedora to North Carolina sent the team into a tailspin last year. Despite the easy home slate, the Broncos do open up with a tough road game at Washington and its crazed Husky Stadium fans and must travel to BYU in late October.

After opening the season with a home date to FCS opponent Colgate, Air Force faces a non-conference slate of familiar military comrades in Navy and Army later in the year. Although Air Force’s dominance over Army ended last year in a shocking 41-21 loss, it’s hard to see them losing to the Black Knights two years in a row. The Falcons would have ranked much better on this list considering the home contest versus Notre Dame, but it’s hard to predict exactly what kind of Irish team Air Force will see in late October with the loss of heralded QB Everett Golson.

UNLV opens the season with three straight non-conference games against teams that went bowling last year. At least the Rebels can leave their thermals at home when they travel to Minnesota in late August. They quickly return home to face 2012 bowl winners Arizona and Central Michigan. The September 7 match-up against the high-powered Wildcats offense could pose a real problem for UNLV’s defense that finished 98th nationally last year.

San Diego State opens two of its first first games of the 2013 season against Pac-12 and Big Ten programs that went a collective 21-4 last year. Tossing aside the “scrimmages” against Eastern Illinois and New Mexico State, the Aztecs most certainly will have their hands full when they travel to play Ohio State and face 102,329 screaming fans at Ohio Stadium. At least San Diego State gets a bye week afterward before coming home to face a strong Oregon State defense.

Norm Chow and his Hawaii Warriors are coming off a nightmarish 3-9 campaign that somehow saw their offense rank 118 nationally. Where have you gone Timmy Chang! Ohio State transfer QB Taylor Graham has the unenviable task of opening the season with a home date versus USC before traveling the following week to Corvallis to take on Oregon State. As if the offense wasn’t bad enough in 2012, a defense that ranked 86th nationally will have to contend with option-happy Navy and Army.

Utah State hopes to build upon its WAC championship of a year ago and recent success of bowl invitations. It will be tested on the opening night of the season when it travels to Salt Lake City to take on Utah. The Utes should be good and ticked off after last year’s upset in Logan. After a pillow fight with in-state college Weber State, the Aggies travel to Los Angeles Memorial Coliseum to take on the Trojans of USC. On the plus side, Utah State gets BYU at home where the Aggies were undefeated a year ago.

San Jose State is coming off a historic season that saw the club finish with its best record since the 1940’s and a #21 BCS ranking. On the plus side, the Spartans open up the season with a rare home game. The negative: a week 2 bus trip to neighboring Palo Alto to take on the Rose Bowl winning Stanford Cardinal. The Spartans should go into this game with a good deal of confidence, however, as they were tied 17-17 in the fourth quarter and out-gained the Cardinal last year before falling by just 3 points. The Spartans passing attack will face a stiff challenge when it travels to Minnesota, and the defense will have its hands full for the third straight year when it tries to slow down Navy’s running game.

Interestingly enough, Colorado State is the only MWC team to take advantage of the Hawaii Exemption. The Rams are also the only MWC team to play a non-conference schedule consisting of two conference champions. And one of them just happens to reside in Tuscaloosa, where a Rams offense that ranked 100th overall in 2012 will face a Crimson Tide defense that practically serves as a minor league for the NFL draft in recent years. A week 2 road game against always-tough Tulsa shouldn’t be much easier for Jim McElwain’s squad, but at least his team opens against a struggling Colorado Buffalo program the Rams defeated 22-17 last year.

29-12. That’s the overall 2012 record of the FBS non-conference opponents on Nevada’s schedule. Thankfully the Wolf Pack return All-Mountain West second team QB Cody Fajardo to try and navigate this incredibly tough non-conference slate – especially on the road. After opening the season with a UCLA team that went to the Pac-12 Championship last year, followed by a home date with FCS member UC Davis, Nevada then has to travel 2,500 miles to take on ACC Champion Florida State. Then when a challenging MWC schedule comes to an end, the Wolf Pack end the season with a home date versus BYU. Contending for yet another bowl appearance could be quite the challenge for first-year coach Brian Polian.

When games at Pittsburgh and at UTEP are part of the easiest non-conference schedule a team has in your league, you gotta applaud that league for scheduling tough out of conference. Way to go, MWC, for not being afraid to schedule tough opponents!

Exactly! Look at how many times BYU and Pac-12 schools are on here (over a dozen) versus the MAC (1).

Here is my formula.
Take your favorite team, in order – which two are the games you would hate to see on your team’s 2013 schedule.

I’m digging your formula and will have to give that some serious thought here as I’m reviewing the Sun Belt.

Colorado State might be in the top 5 @ Alabama and @ Tulsa. I would give them the nod over Boise

PNB – Those are 2 tough away games. Difficult to argue against CSU’s inclusion in the top 5.

@Tacklingdummy: Thanks for the compliment. This was actually my debut article for FBSchedules; the other previews have been written by the awesome Clayton Tinkle. I believe his SEC preview comes out soon, and I’m working on the Sun Belt, MAC, and C-USA as we speak.

Switch nos. four and three, and your formula works.

True to their nature this, the Mountain Worst lost all 10 of these games with Utah State , the only team to avoid being blown out.

Do you think you guys may have placed too much emphasis on the difficulty of San Jose State’s schedule? Hawaii, Utah state, and SDSU all have schedules that are much tougher, in my opinion. Even Boise State’s schedule is arguably tougher than SJSU’s.

Brock: Totally valid points. Taking Utah St. for example, I’m not saying going to USC isn’t going to be tough, but I’m just not sure about USC’s QB situation right now. That’s what makes these rankings so tough – and fun to debate – during the summer. USC could make me look like a fool by blowing out the Aggies, or maybe Utah St. keeps it close like they did last year at Wisconsin.

Yes, I was just thinking that. How is San Jose St 3rd with Stanford, Minnesota, Navy and Sac St…San Diego State’s looks about the same with Ohio State, Oregon State, New Mex St and E. Illinois. I don’t think Minnesota and Navy are difficult games at all.

Boise’s game with UT Martin (Dean would be better) could be the biggest blowout. How do sell tickets to that game?

Cal Poly beat Wyoming last year and almost beat Wisconsin a few years ago. I will be LOL when they beat Fresno. Get a clue.

I don’t see a big differential between your #9 (Boise State) and #3 (SJ State). Road games against Washington and BYU are comparable to games at Stanford and Minnesota, and home games against UT Martin and Southern Miss are not different than Sacramento State and Navy. I suspect you are giving some credit to the relative underdog nature of San Jose State, and downgrading Boise State a bit due to their success in recent years.

Herm: Thanks for reading and for the observation. I hear what you’re saying. My thinking on this one is that Southern Miss is a mess right now and is coming off of an 0-12 season, whereas Navy went 8-5 and to a bowl game. I will certainly agree that UT Martin on Boise’s schedule and Sac. St. on SJSU’s is a total wash. I was also thinking that Stanford is coming off of 3 straight BCS Bowl games, so that game might be tougher than it looks at first glance. But I hear what you’re saying and you make a great point.

It is part of the beauty of college football, how much things can change in a year. While Southern Miss was a mess last year, the year before they gave Case Keenum a miserable time while knocking apart Houston’s BCS dreams, en route to beating Nevada in their bowl game. And while Navy made it to a bowl game last year, they probably shouldn’t have bothered. They were a far cry from the Navy team that roughed up Notre Dame a couple years ago, as Arizona State turned them into road kill. This is a new year.