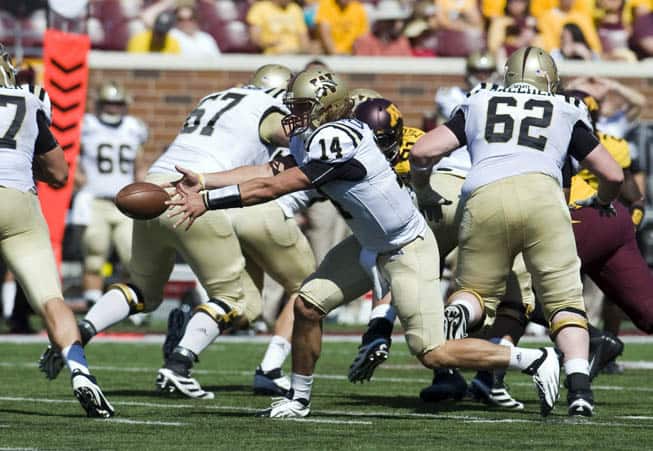 Now that we’ve ranked the non-conference schedules for the MWC, American and Sun Belt, we continue along our non-automatic qualifying conference journey by taking an in-depth look at the Mid-American Conference (MAC).

Unlike the other non-automatic qualifying conferences around the country, the MAC remained stable in the offseason and neither added nor lost teams from 2012. This bodes well for the MAC as it’s coming off arguably the single greatest season in conference history that saw seven teams go to bowl games, including the conference’s first BCS buster (Northern Illinois).

When you’re done reading about the MAC, please make sure to check out our other non-conference schedule rankings for the SEC, ACC, Big 12, Big Ten and Pac-12.

Ball State ended its 2012 regular season campaign with six straight wins before losing to UCF in the Beef ‘O’ Brady’s Bowl. Cardinals fans should have every reason to feel optimistic about a strong 2013 season in the MAC West especially with an incredibly soft non-conference slate that doesn’t feature a single FBS school that won more than four games last year. Ironically, Ball State will need to make sure it doesn’t sleepwalk through its week one matchup versus Illinois State – – the Redbirds chalked up a road win at fellow MAC school Eastern Michigan last year by 17 on their way to a 9-4 mark.

Former Nebraska and current Ohio coach Frank Solich continues an impressive run that has witnessed just two losing seasons during his eight-year tenure in Athens. When coupled with four straight bowl appearances, road victories over Penn State and Marshall in 2012 and the return of electrifying QB Tyler Tettleton, no wonder many have the Bobcats contending for the MAC East title. They’ll have to come out of the gates quickly, however, as they open up with a tough road contest versus 2012 Sugar Bowl champion Louisville and one of the best quarterbacks in the nation in Teddy Bridgewater. From there the schedule gets pillowy soft as sub-.500 squads North Texas and Marshall come to town before a visit from FCS pushover Austin Peay (2-9 in 2012).

BCS party crashers Northern Illinois and record setting QB Jordan Lynch are ready to show the country that 2012 was no fluke. Lynch looks to follow up on his FBS single-season rushing record for a quarterback (1,815 yards) with a week one upset of Iowa. This is the same Hawkeyes squad that barely squeaked by the Huskies 18-17 last year. After a trip to perennial FBS doormat Idaho, Northern Illinois returns to DeKalb for its only non-conference home game versus FCS foe Eastern Illinois. The Huskies high-powered offense (12th in rushing and 13th in scoring last year) gets its second crack at a Big Ten upset on Sept. 28th when it travels to West Lafayette to take on a Purdue defense that was a dismal 87th in scoring in 2012.

On November 12, 2011, Eastern Michigan defeated conference foe Buffalo to take its record to 6-4 with 2 games left on the slate. The Eagles were poised to make a bowl game for only the second time in school history. Since that victory over the Bulls, however, Ron English’s squad has gone a disappointing 2-12. 2013 might not be any kinder to the Eagles either. Although they open up at home versus Howard, this is the same Eastern Michigan team that managed to lose to another FCS school at home last year. Things won’t get any easier as they travel to Penn State, Rutgers and run-happy Army. The final road game of this non-conference trio could prove especially frightful for an Eagle’s rushing defense that was dead last in the nation last year on their way to giving up 267 yards per game on the ground. While it may be another long season for folks in Ypsilanti, at least a 2012 home attendance average of 3,923 fans – worst of all FBS squads – ensures that plenty of great seats will be available.

The Miami RedHawks look to rebound from a disappointing 4-8 campaign a year ago, but will have to do so versus a non-conference slate lacking an FCS opponent – something all the other MAC schools enjoy. Although the RedHawks only have one non-conference home game, they do catch the only 2012 team to go bowling (Cincinnati) at Yager Stadium. Miami’s slate looks a bit deceptive from this angle too – While the RedHawks do endure road contests at an SEC and Big Ten school, Kentucky and Illinois fumbled their way to a collective 4-20 record last year.

Bowling Green, and a defense that ranked 6th overall in the country last year, look to follow up its bowl appearance with another strong effort in 2013. That stingy defensive unit will be tested early when defending Conference USA champion Tulsa comes to town on opening night. After getting a chance to flex its muscle against Big Ten school Indiana – and returning home to take on FCS opponent Murray State – – the Falcons face potentially its biggest non-conference test when the team travels to Starkville to take on a Mississippi State Bulldogs squad coming off an 8-5 record and New Year’s Day bowl game.

Central Michigan knows how to diversify its non-conference portfolio. The Big Ten, CAA, MWC and ACC are all in the mix for a Chippewas club that saved its 2012 season with 4 straight victories, including a bowl win. Central Michigan has the unenviable task of opening the 2013 season at The Big House and its new pro-style offense led by elusive QB Devin Gardner. After they return home the following week to take on FCS foe New Hampshire, the Chippewas fly all the way to Sin City to take on UNLV. Then it’s back home to take on a tough conference opponent in Toledo before trekking to Raleigh, NC to take on the NC State Wolfpack. Without a bye week to give the Chippewas a breather, the start of the 2013 season could be a doozie.

Former Auburn head coach and ABC broadcaster Terry Bowden might be considering a return to the booth after 2012’s nightmarish 1-11 campaign. In fact, the Akron Zips haven’t defeated an FBS squad since November of 2010. Things won’t get much easier for a lackluster rushing game (105th in 2012) and arm-tackling defense (99th total last year) when it opens the season against a UCF Knights club that won 10 games a year ago. After a visit from James Madison, the Zips will see firsthand and up-close why many are choosing the Michigan Wolverines to contend for the Big Ten title. Even a visit from UL Lafayette of the Sun Belt on Sept. 21st could prove to be trouble – – the Ragin’ Cajuns went 9-4 last year and are coming off of two straight bowl wins. Another 1-11 campaign and Terry Bowden might find himself fishing in 2014 with his father, legendary and retired Florida State coach Bobby Bowden.

Kent State came out of absolutely nowhere in 2012 to come within an overtime MAC Championship win versus Northern Illinois of crashing the Orange Bowl. Perhaps the letdown of that loss explains the club’s lackluster performance versus Arkansas State in the GoDaddy.com Bowl five weeks later. If the Golden Flashes hope to repeat the magic of last season, it’ll have to do so versus a much more difficult non-conference slate than a year ago. After opening at home versus FCS school Liberty, Kent State has a bye week to prepare itself for playing in one of the most hostile environments in all of college football – – Tiger Stadium. If the Golden Flashes can escape Baton Rouge in one piece, it then must travel to Happy Valley to take on a Penn State team that wildly exceeded expectations in 2012 following the Jerry Sandusky scandal. This one-two punch of LSU-Penn State is one of the tougher seven-day, non-conference spans of any MAC school.

After an Oct. 27th victory over Buffalo last year, Toledo had rocketed toward an 8-1 record and #25 ranking. Unfortunately, the Rockets lost their final 3 of 4 games including a surprising 41-15 blowout to Utah State in the Famous Idaho Potato Bowl. Toledo’s non-conference slate could make it challenging to return to a fourth straight bowl game. The Rockets visit SEC country to open up the season at The Swamp to take on a Gator squad that went BCS bowling a year ago. No rest for the weary either, as second-year coach Matt Campbell and his troops make a second SEC road visit, this time to Missouri to face a Tigers team looking to rebound from a rough 2012 season. Even when it looks like Toledo might catch a break by opening the home slate with an FCS squad, 2012 NCAA Division I Football Championship semifinalist Eastern Washington comes to town. The Rockets cap their non-conference slate with a visit from run-first, pass-second Navy, which could prove challenging for a Toledo defensive group that finished 109th overall last year.

Since the departure of head coach Turner Gill to Kansas in 2008, it’s been tough sledding for Buffalo. The Bulls have gone 9-27 since then and featured a 2012 offense that ranked 99th nationally in scoring. Things won’t get any easier for fourth-year coach Jeff Quinn when his men open the season with difficult road tests at Ohio State and Baylor. The Buckeyes, along with the Crimson Tide of Alabama, are the media darlings to play for the BCS National Championship. After visiting Columbus and 102,329 delirious fans, Buffalo must get right back on the road and travel south to Waco, TX to take on the up-and-coming Baylor Bears and an offense that averaged a heart-pounding 572 yards of total offense last year. Quinn must hope his squad’s confidence isn’t shattered when it returns home for two straight non-conference matchups versus Stony Brook and Connecticut.

Perhaps the most amazing stat to come out of the MAC in 2012 is 12.7 points per game. That’s all the Minutemen could muster during its transitional year from FCS to FBS. It’s hard to imagine them eclipsing that mark with non-conference games against Wisconsin, Kansas State and Vanderbilt. All these schools accomplished last year was a combined 28-12 record and a Rose Bowl, Fiesta Bowl and Music City Bowl appearance among them. Without a single bye week to recover from the physical pounding and jet lag, it’s looking to be a rough opening stretch for UMass.

The good news for P.J. Fleck is that at the age of just 32, he’s the youngest head coach in all of the FBS. The bad news is that his early-season schedule, at first glance, makes one wonder if Western Michigan moved to the Big Ten in the offseason. Coming hot on the heels of a disappointing 4-8 season, the Broncos open up under the lights in East Lansing against an always-tough Mark Dantonio-led squad. Two weeks later its off to Chicago to face a Northwestern Wildcats team that is enjoying one of its best stretches of success in school history. Western Michigan completes its Big Ten hat trick with a Sept. 21st visit to an Iowa team eager to rebound from a 4-8 record last year. Without even a bye week to lick its wounds, Fleck’s team faces arguably one of the toughest non-conference schedules of all 125 FBS teams. At least the Broncos get a modicum of relief in week two when they play one of the worst teams in all of the FCS – – Nicholls State.

Good eye verandaman. Working to change that as indeed this is his fourth year.

Paul B: I can totally see your point on swapping UMass and Western Michigan. My thinking is that without Colin Klein, it’s tough to know what kind of Kansas St. team we can expect. But either way, both the Minutemen and Broncos play just brutal non-conference schedules!

KSU doesn’t have a bye week to get ready for LSU after the Liberty game they host BGSU.

Buffalo got to lose those teams those non conference teams that they have no business playing . I know they. Receive a million plus for being the ” Washington Generals”. But , it must be a disaster for a team that wants to improve and compete . Starting out with 3 loses is ridiculous.
HP class 1971